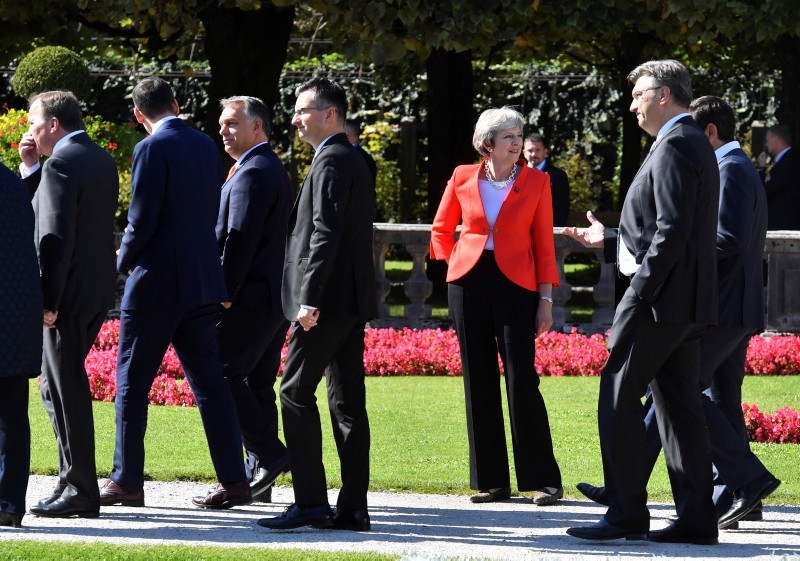 British Prime Minister Theresa May looks to passing by heads of government after the family photo at the informal EU summit in Salzburg, Austria, Thursday, Sept. 20, 2018. (AP Photo)
by Sep 21, 2018 12:00 am

Prime Minister Theresa May's Brexit proposals were declared dead by the British media on Friday after what they cast as a humiliation at the hands of European Union leaders at an informal summit in Salzburg.

After a dinner of Wiener schnitzel in Salzburg, EU leaders said they will push for a Brexit deal next month but warned May that if she will not give ground on trade and the Irish border by November they are ready to cope with Britain crashing out.

For the British media, the message was clear.

"Your Brexit's broken," the Daily Mirror newspaper said on its front page.

British newspapers led their front pages with a Reuters picture showing May, attired in a red jacket, standing apparently aloof and alone from a mass of suited male EU leaders.

"May humiliated," The Guardian newspaper said.

"Humiliation for May," said The Times on its front page.

The negative headlines indicate the extent of the divergence in perceptions between London and the capitals of the EU's other 27 members on the future of Brexit.

The Sun went much further: "EU Dirty Rats - Euro mobsters ambush May," it said alongside a mocked up picture of French President Emmanuel Macron and European Council President Donald Tusk cast as American gangsters with guns.

Macron bluntly said May's Brexit proposals, known as Chequers after the country house where they were agreed by the British cabinet in July, were "unacceptable".

Tusk was criticized for posting a picture of him offering May a choice of delicate cakes beside a message: "Sorry, no cherries." That is a reference to what EU leaders cast as British attempts to cherry pick elements of EU membership.

"When two hedgehogs hug each other, you have to be careful that there will be no scratches," he told Austrian newspapers.

Britain is due to leave the European Union on March 29, yet little is clear: there is, so far, no divorce deal, rivals to May are circling and some rebels have vowed to vote against a possible Brexit deal.

Both London and Brussels say they want a divorce deal, though there is limited time if the British and EU parliaments are to ratify a deal by March 29. Any deal must be approved by British lawmakers.

"May will emerge as unique in the annals of history if she survives as PM much longer in the face of setbacks on this scale," British journalist Robert Peston wrote.

May on Thursday promised new proposals to reassure Dublin that it would not get a "hard border" with Northern Ireland but said that she too could live with a no-deal outcome.

May's former Brexit minister David Davis has said up to 40 lawmakers from the Conservative Party will vote against her Brexit plans.

Davis told Huffington Post there was a "rock-solid" core of party lawmakers who belonged to the European Research Group (ERG), a grouping which wants a sharper break with the EU and were willing to vote down her plans.

If a possible deal were rejected by the British parliament, Britain would face leaving the EU without an agreement, delaying Brexit or calling another referendum.

"If all conventional roads lead to a hard no-deal Brexit, the notion of Parliament exerting control and forcing another referendum on us would begin to look not wholly fanciful," Peston wrote in the Spectator.

If it left without a deal, the country would move from seamless trade with the EU to customs arrangements set by the World Trade Organization for external states.

Many business chiefs and investors say a so called "no-deal" Brexit would weaken the West, panic financial markets and block the arteries of trade. Brexit supporters say such fears are exaggerated and Britain would thrive in the long term.