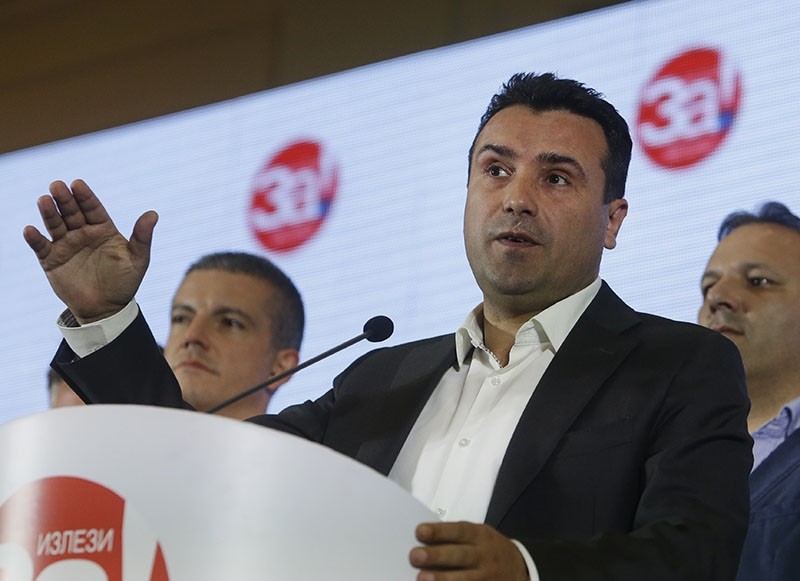 Macedonia's Prime Minister Zoran Zaev talks to members of the media during a news conference about the referendum in Skopje, Macedonia, late Sunday, Sept. 30, 2018. (AP Photo)
by French Press Agency - AFP
Oct 01, 2018 12:00 am

Macedonia's prime minister vowed to push ahead with changing the country's name after voters approved it in a referendum, but the outcome looked uncertain Monday as opponents said low turnout made the result void.

Premier Zoran Zaev wants to rename the Balkan state North Macedonia to end a long-running row with Greece and build ties with the West.

More than 90 percent of the country's 1.8 million voters supported the name-change in Sunday's referendum, but only a third of the electorate turned out.

"More than 90 percent of the total votes are 'yes', so now it is parliament's turn to confirm the will of the majority," Zaev told AFP late Sunday.

But opponents of the move said the low turnout called the legitimacy of the referendum into doubt.

The head of the right-wing opposition VMRO-DPMNE party, Hristijan Mickoski, told reporters the government had "lost its legitimacy."

Through the name change, Zaev aims to open a path to integration with the West by settling the decades-long dispute with Greece.

Greece has its own northern province named Macedonia and has accused its northern neighbor of territorial ambitions.

Zaev and his Greek counterpart Alexis Tsipras agreed in June on the name North Macedonia.

In return for the new name, Athens would drop its long-standing objections to the Balkan country joining the European Union and NATO.

Zaev now needs two-thirds of MPs to ratify the deal.

He has support from ethnic Albanian groups in his coalition but would also need to win over opposition lawmakers.

Mickoski said voters had responded to calls to boycott the referendum and called on the government to "respect the will of the people."

"Referendum fails, Macedonia heads towards new elections," said the Vecer paper, which is close to the opposition.

For opponents, the vote was invalid under a constitutional provision requiring a 50 percent turnout.

But Zaev insisted that because the referendum was only consultative a 50 percent turnout was not needed.

The country has not held a census since 2002 and has a high emigration rate.

French Balkan specialist Loic Tregoures judged that the number of 1.8 million voters on the electoral roll was "inflated."

Zaev's ruling coalition has 69 MPs in the 120-strong assembly.

To gather the required two-thirds majority Zaev needs to convince at least a dozen MPs from the opposition to back the move.

If Zaev does not succeed he would have to call early elections in November.

"Zaev will not succeed in the parliament and we will soon have elections, which VMRO-DPMNE will lose," said political commentator Aco Abranov.

He recalled the party's poor results in the last election and internal wrangling since it lost power.

The EU on Monday hailed the vote as a step towards joining the bloc.

"This is a historic opportunity not only for reconciliation in the region, but also for decisively moving the country forward on its European Union path," EU diplomatic chief Federica Mogherini and enlargement commissioner Johannes Hahn said in a statement.

Western powers have told Macedonia that if they want to join EU and NATO there is no plan B.

"NATO's door is open, but all national procedures have to be completed," the military alliance's secretary general Jens Stoltenberg tweeted.

Reactions to the vote were mixed in Greece, where the government has faced pressure from nationalists over the deal.

Tsipras's coalition partner Panos Kammenos, head of the nationalist Independent Greeks party, has threatened to defect from the government over the Macedonia deal.

The Greek parliament must also ratify the agreement.

The Greek government has said it "remains committed" to the June agreement.

But "time is running out since Tsipras has taken a lot of risks," analyst Tregoures warned.

"Nothing says that the next Greek government will be on the same line."