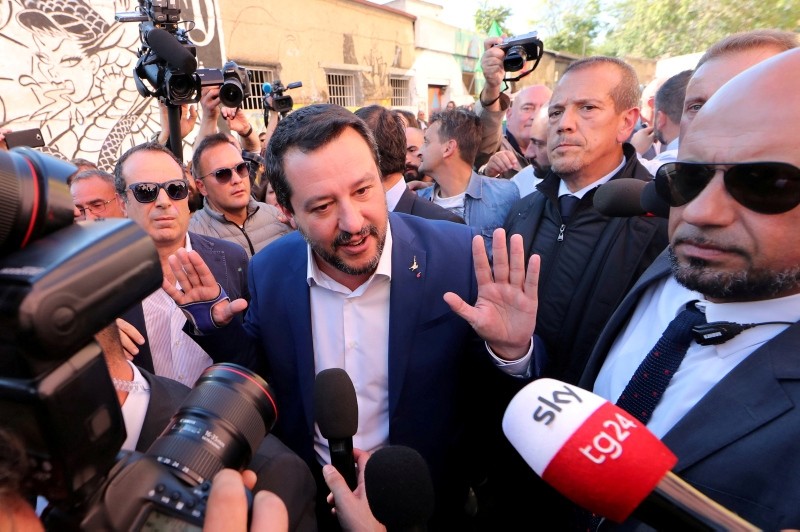 Italy's real-life soap opera, the relationship between Deputy Prime Minister Matteo Salvini and television star Elisa Isoardi, reached its last episode on Monday when she said goodbye by posting a selfie of them in bed.

The breakup found space among the top items of newspaper websites and television broadcasts, along with stories about Rome's war of words with the European Commission over its budget as well as storms that killed dozens of people in the past month.

Isoardi, 35, who hosts a television talk show, posted a picture of herself awake while Salvini appeared to be sleeping on her shoulder. Her chest was covered by a white towel. His was not.

Below the picture of the snoozing 45-year-old Salvini and the smiling, wide-eyed Isoardi were the words:

"It's not what we gave each other that I will miss but what we still could have given each other. With enormous respect for the true love that was, thank you, Matteo."

However, Isoardi's post also suffered backlash from social media users. Some said Isoardi should have kept this intimate moment to herself, while others pointed out to the fact that Salvini is a deputy prime minister. For some users, the post was a result of the overall corruption of values in Italy.

The timing of the post also brought criticism as Italy is currently trying to recover from devastating storms, floods and mudslides, killing over 30 people and inflicting billions of euros of damage.

For the past three years that they were together, Salvini and Isoardi were often on the covers of Italian gossip magazines as paparazzi tracked them from the canals of Venice to the beaches of Mediterranean islands.

Salvini, who is also the interior minister and the leader of the anti-immigrant far-right League party, was on a flight to Ghana when Isoardi told the world it was over.

Last Friday, a poll showed that most Italians viewed Salvini as the real head of government, with just one in six casting Prime Minister Giuseppe Conte in that role.