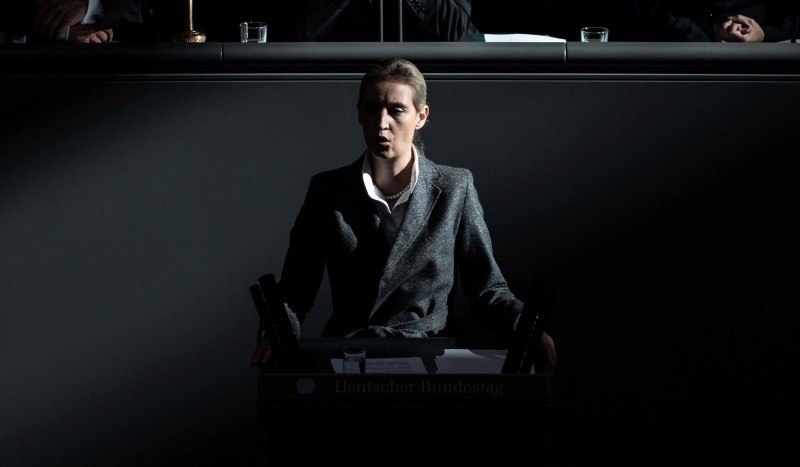 The co-chair of the parliamentary group of the right-wing 'Alternative fuer Deutschland' (AfD) party Alice Weidel delivers a speech at the German Parliament, the Bundestag in Berlin, Germany, 17 Oct. 2018. (EPA Photo)
by Compiled from Wire Services Nov 14, 2018 12:00 am

German prosecutors decided Wednesday to open a case against the co-leader of the far-right Alternative for Germany (AfD) party because of concerns that campaign finance laws were violated due to donations from Switzerland.

Prosecutors in the southern city of Konstanz said Wednesday they have asked parliament to lift the immunity of Alice Weidel, who is co-leader of the anti-immigration AfD party.

The alleged donation, totaling 130,000 euros (146,000 dollars), was paid in tranches between July and September 2017 to the AfD's Lake Constance branch. The payments were marked as "campaign contribution Alice Weidel," according to a statement released by prosecutors.

German media reported Wednesday that Weidel had used part of the money to pay for social media advertising during her election campaign, and for a lawyer suing journalists on her behalf.

Weidel's party confirmed she used the funds to pay bills, but said she later ordered the donations returned after doubts were raised about their legality.

A Zurich-based company confirmed the payment, but its administrative board stressed that it transferred the money on behalf of someone else. The name and identity of the original donor remains unknown.

Weidel has said that she first got wind of the "unsolicited" donation in September 2017 and later called for a repayment. There were "concerns on account of legality," she said.

The repayment did not take place until April 2018.

Donations from non-EU country citizens are not allowed in Germany.