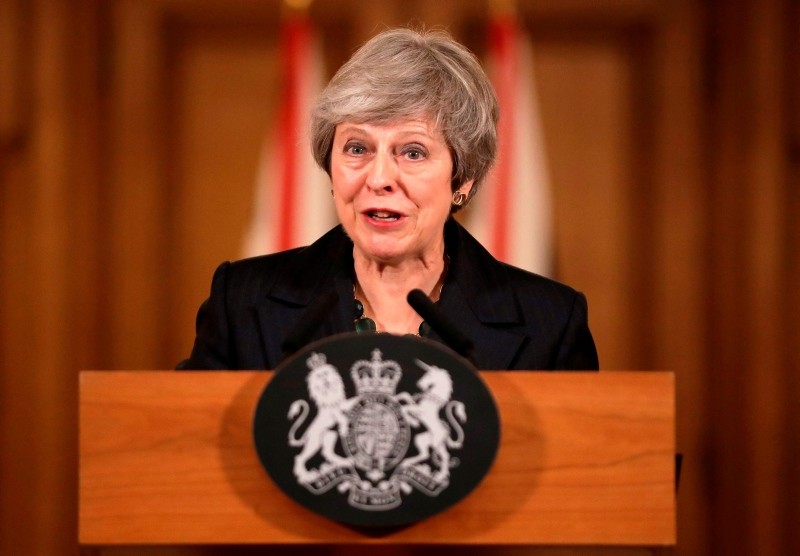 Britain's Prime Minister Theresa May gives a press conference inside 10 Downing Street in central London on November 15, 2018. (AFP Photo)
by Associated Press Nov 16, 2018 12:00 am
British Prime Minister Theresa May appealed directly to voters to back her Brexit plan Friday as she waited to see whether rivals within her party have gained enough support to launch a leadership challenge.

May answered questions from callers on a radio phone-in, the day after she vowed to stay in office and see through Britain's exit from the European Union.

It was not an easy ride. One caller said May should resign and let a more staunchly pro-Brexit politician take over; another compared her to Neville Chamberlain, the 1930s prime minister who vainly tried to appease Nazi Germany to avoid a war.

May stood by her plan.

"For a lot of people who voted 'leave,' what they wanted to do was make sure that decisions on things like who can come into this country would be taken by us here in the U.K., and not by Brussels, and that's exactly what the deal I've negotiated delivers," she said.

May is battling to save her Brexit plan, and her job, after the draft withdrawal agreement between Britain and the EU sparked fierce opposition from euroskeptic politicians in her Conservative Party. They say the agreement, which calls for close trade ties between the U.K. and the bloc, would leave Britain a vassal state, bound to EU rules it has no say in making.

Several Conservative lawmakers are pushing for a no-confidence vote, hoping to reach a threshold of 48 to trigger a challenge. If May lost her job as party leader, she would also lose her position as prime minister.

A defiant May vowed Thursday to "see this through," and said abandoning her Brexit plan, with Britain's exit just over four months away on March 29, would plunge the country into "deep and grave uncertainty.

The political turmoil has prompted a big fall in the value of the pound, which was trading under $1.28 Friday, near Thursday's low and down 1.5 percent in 48 hours, as investors fretted that Britain could crash out of the EU in March without a deal. That could see tariffs on British exports, border checks and restrictions on travelers and workers.