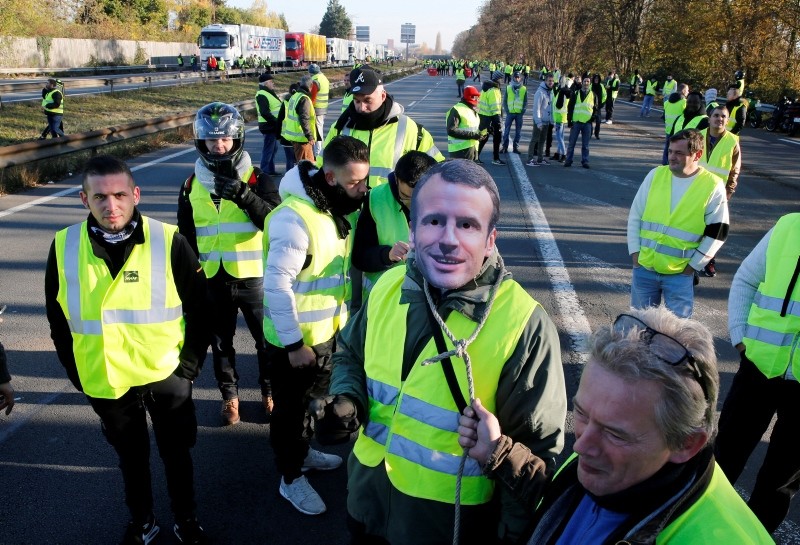 A man wears a mask with the likeness of France's President Emmanuel Macron as people take part in the nationwide demonstrations, a symbol of a French drivers' protest against higher fuel prices in Haulchin, France, Nov. 17, 2018. (Reuters Photo)
by Compiled from Wire Services Nov 17, 2018 12:00 am

A woman has died during protests against rising petrol and diesel prices and government plans to further hike the tax on vehicle fuel in France.

Another woman driving a car panicked when she encountered a roadblock and ran over a protester, French Interior Minister Christophe Castaner said on Saturday on live television.

The accident took place in the town of Pont-de-Beauvoisin, to the north of the city of Grenoble in south-eastern France, according to the minister.

France was expecting a country-wide wave of protests Saturday.

Protesters pledged to target tollbooths, roundabouts and the bypass that rings Paris on Saturday. The government is preparing to send police to remove protesters and threatening fines.

The taxes are part of Macron's strategy of weaning France off fossil fuels. Many drivers see them as emblematic of a presidency seen as disconnected from day-to-day economic difficulties.

The protesters have dubbed themselves the "yellow jackets" because they wear fluorescent vests that all French drivers must keep in their vehicles in case of car troubles.