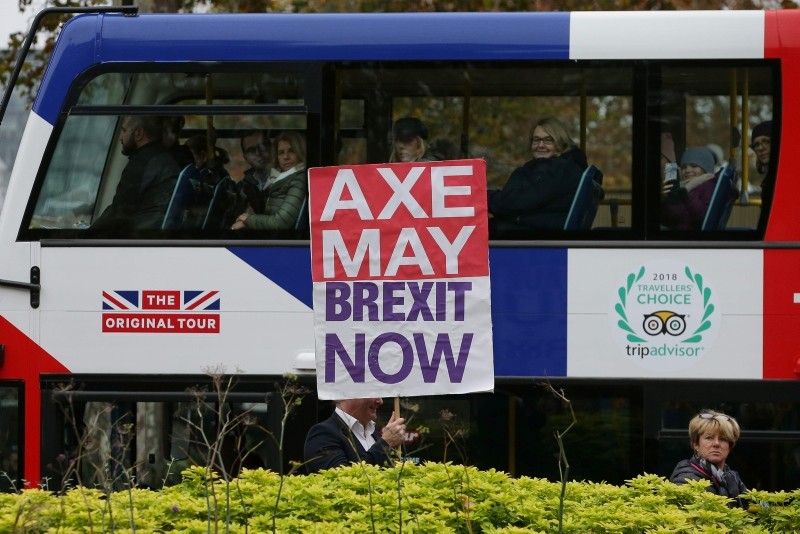 A pro-Brexit supporter stands with a placard demanding that Britain's Prime Minister Theresa May be sacked and to leave the European Union immediately near the Houses of Parliament in London on November 16, 2018. (AFP Photo)
by Compiled from Wire Services Nov 18, 2018 12:00 am

British Prime Minister Theresa May said on Sunday toppling her would risk delaying Brexit and she would not let talk of a leadership challenge distract her from a critical week of negotiations.

Since unveiling a draft divorce deal with the European Union on Wednesday, May's premiership has been thrust into crisis by the resignation of several ministers, including her Brexit minister, three other ministers and some lawmakers from her own party seeking to oust her.

To trigger a confidence vote, 48 of her Conservative Party lawmakers must submit a letter to the chairman of the so-called 1922 committee, Graham Brady.

More than 20 lawmakers have said publicly that they have submitted a letter, but others are expected to have done so confidentially. Brady told BBC Radio on Sunday the 48 threshold had not yet been reached.

"These next seven days are going to be critical, they are about the future of this country," May told Sky News. "I am not going to be distracted from the important job.

May said negotiating teams were working "as we speak" and she intended to go to Brussels and meet European Commission President Jean-Claude Juncker. She said she would also be speaking to other EU leaders ahead of an EU summit to discuss the deal on Nov. 25.

Several British newspapers reported that five senior pro-Brexit ministers were working together to pressure May to change the deal, but writing in the Sun on Sunday newspaper May said she saw no alternative plan on the table.

Asked about the attacks directed at her, May said: "It doesn't distract me. Politics is a tough business and I've been in it for a long time."

Former Brexit minister Dominic Raab, who resigned on Thursday in protest at the deal, said he supported May as leader but her deal was "fatally flawed" and he did not think it would be approved by parliament. He said May must change course.

"I still think a deal could be done but it is very late in the day now and we need to change course," Raab told the BBC.

"The biggest risk of no deal is taking a bad deal to the House of Commons ... it is very important to take the action now."

May runs a minority Conservative government and a rump of Brexiteers in her own party, the Northern Irish allies she relies upon for support, plus the opposition, have vowed to vote down the draft deal.

Opposition Labour leader Jeremy Corbyn said his party would vote against May's deal when it came to parliament, but distanced himself from calls for a so-called people's vote on the final agreement.

May said Corbyn was "playing party politics" with Brexit.

"There are those in the House of Commons who just want to stop Brexit. I believe it is essential for people's trust in politics and parliament that we deliver on Brexit," she added.

Many pro-Brexit Conservatives want a clean break with the EU and argue that the close trade ties between the U.K. and the EU called for in the deal would leave Britain a vassal state, with no way to independently disentangle itself from the bloc.

The draft agreement envisions Britain leaving the EU as planned on March 29, but remaining inside the bloc's single market and bound by its rules until the end of December 2020.

It also commits the two sides to the contentious "backstop" solution, which would keep the U.K. in a customs arrangement with the EU as a guarantee that the Irish border remained free of customs checkpoints.

A 52-percent majority voted for Britain to leave the EU in the 2016 referendum.