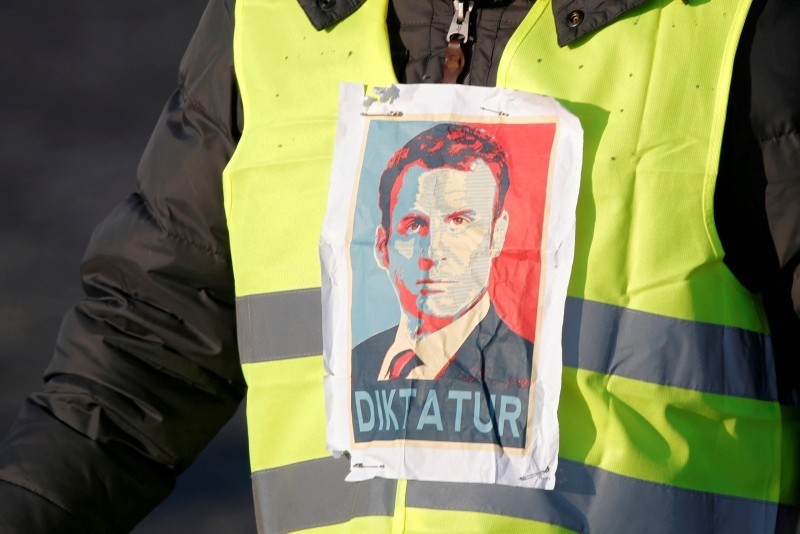 A man wearing a yellow vest, a symbol of a French drivers' protest against higher fuel prices, attends the demonstration with an image of French president Emmanuel Macron, in Paris, France, November 17, 2018. (Reuters Photo)
by reuters
Nov 19, 2018 12:00 am

Emmanuel Macron's popularity took a further hit in recent weeks, according to a poll on Sunday, as fuel tax protests rumbled on across France in the latest sign of discontent with the president's economic reforms.

Only 25 percent of those questioned in an Ifop poll between Nov. 9 and 17 said they were satisfied with Macron, down from 29 percent in October, according to the survey of almost 2,000 people published in the Journal du Dimanche (JDD).

Macron, who came to power 18 months ago vowing to reshape the economy and overhaul institutions, has brushed off slumping ratings to push through a series of reforms, including a loosening of laws governing hiring and firing.

His government introduced fuel tax hikes to encourage drivers to embrace less-polluting cars, touching a nerve with voters in rural areas in particular as the extra cost began to bite in October when global oil prices surged.

Angry motorists and other demonstrators, many accusing Macron of being out of touch with ordinary people, blocked roads across France on Saturday in a grassroots campaign dubbed the "Yellow Vests" that drew nearly 288,000 protesters.

More than 400 people were injured, 14 of them seriously, Interior Minister Christophe Castaner said, with some frustrated drivers trying to ram through blockades, and at least 157 people were taken into police custody.

A woman protester died when she was accidentally hit by a panicked driver at one blockade.

Some maintained protests on highway slip-roads, tolls and roundabouts on Sunday.

In another Ifop poll in the JDD on Sunday, 62 percent of those surveyed said the government should prioritize policies to help household incomes even if it meant advancing more slowly on measures to fight climate change.

Prime Minister Edouard Philippe, who said on Sunday he was sensitive to the sense of abandonment expressed by some protesters, stressed that the government would not back down on its fuel tax plans.

These are set for another hike in January including on diesel, the most commonly used fuel in France.

"The path we've set out on is the right one and we're going to stick to it," Philippe told France 2 television. He said workers would ultimately have less of a tax burden by the end of Macron's mandate, with some measures already feeding through this year, such as reduced housing tax bills.

Macron's popularity has sunk to as low as 21 percent in other polls recently, after a torrid summer marked by a scandal over the violent conduct of his former security adviser and the departure of several ministers.

In another poll released on Sunday, by OpinionWay, Macron's approval ratings were unchanged in November from a month earlier at 29 percent.