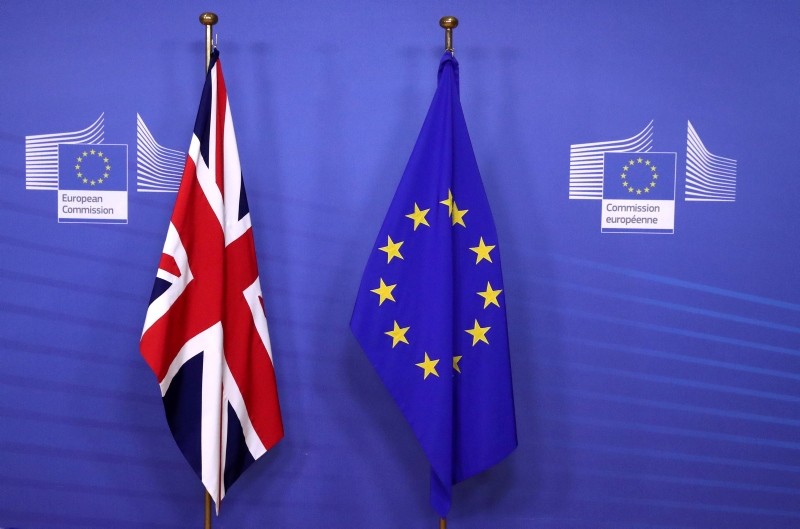 Flags of the UK and the EU are seen before UK's Prime Minister Theresa May meets with European Commission President Jean-Claude Juncker to discuss draft agreements on Brexit, at the EC headquarters in Brussels, Belgium, Nov. 21, 2018. (Reuters Photo)
by Compiled from Wire Services Nov 22, 2018 12:00 am

European Council President Donald Tusk said the European Union and Britain have agreed on a draft declaration on the future of their political relations after Brexit.

Referring to a text discussed on Wednesday by British Prime Minister Theresa May and European Commission President Jean-Claude Juncker, Tusk said in a tweet Thursday: "The Commission president has informed me that it has been agreed at negotiators' level and agreed in principle at political level, subject to the endorsement of the leaders."

Tusk, who chairs meetings of EU leaders, says he has sent the draft political declaration to the U.K.'s 27 European partners.

"The declaration establishes the parameters of an ambitious, broad, deep and flexible partnership across trade and economic cooperation" and other areas, according to a copy of the document seen by French Press Agency (AFP).

He says the draft declaration still requires "the endorsement of the leaders."

EU leaders are due to meet in Brussels on Sunday to rubber-stamp the declaration and a separate divorce deal.

May will make a statement on Brexit to parliament at 1430 GMT on Thursday, the opposition Labour Party said on Twitter.