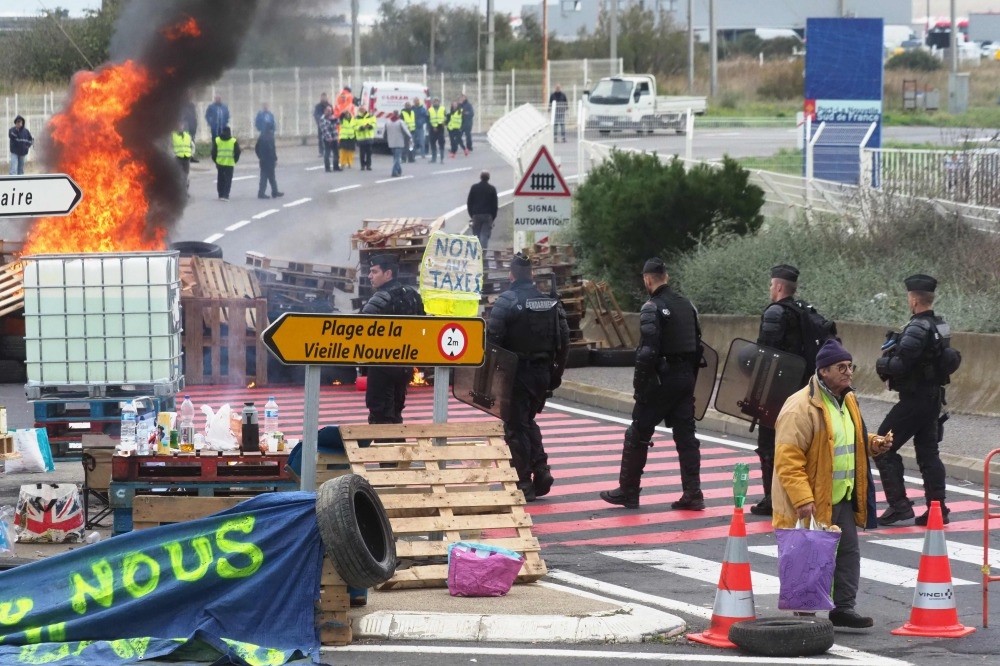 Gendarmes walk by a burning barricade as they disperse protesters blocking the fuel depot of Port-La-Nouvelle, Nov. 20.
by Compiled from Wire Services Nov 22, 2018 12:00 am

Scattered 'yellow vest' protests that have left two people dead continued on roads across France, with many calling for a blockade of Paris on the weekend

A second person died in France amid nationwide protests against fuel tax hikes that saw hundreds injured and key roads paralyzed by demonstrations. The French Interior Ministry sent its "sincere condolences" in a statement to the family and friends of a motorcyclist killed in an accident near a dam Monday in the southeastern Drome region. The ministry did not give details about how he was killed.

Hundreds of thousands of people blockaded roads across France on the weekend, wearing high-visibility yellow vests in a national wave of defiance aimed at President Emmanuel Macron. The protests had waned by Tuesday but the disruption underlined the anger and frustration felt by many motorists, particularly in rural areas or small towns, fed up with what they see as the government's anti-car policies, including tax hikes on diesel. Only a fraction of the nearly 300,000 people that manned the barricades on Saturday still camped out in the bitter cold. Further protests are planned for the weekend, with some calling for a blockade of Paris. Protests have also erupted in Reunion, a French overseas territory island in the Indian Ocean, where authorities introduced a partial curfew in some neighborhoods after a night of violence.

The Interior Ministry condemned the violence that has led to 552 people injured, 17 seriously, over four days of protests that have come to encompass a wide variety of grievances over the rising cost of living. The centrist Macron, who has made a point of not backing down in the face of public pressure during his time in office, called Tuesday for more "dialogue" to better explain his policies. Prime Minister Edouard Philippe, meanwhile, urged ruling Republic on the Move lawmakers to stand firm in the face of voter criticism, saying the party would reap the rewards of its "constancy and determination."

Agence France-Presse (AFP) judicial sources on Tuesday denied media reports that a group of men arrested earlier this month in the city of Saint-Etienne on suspicion of plotting an attack had planned to strike during Saturday's fuel protests.

The grassroots movement, which has won backing from opposition parties on both the left and right as well as a majority of respondents in opinion polls, accuses Macron of squeezing the less well-off while reducing taxes for the rich. "It's about much more than fuel. They [the government] have left us with nothing" Dominique, a 50-year-old unemployed technician told AFP at a roadblock in the town of Martigues, near the southern city of Marseille.

Macron's government, trying to improve its environmental credentials, has vowed not to back down on trying to wean people off their cars through fuel taxes. The government has unveiled a 500-million-euro package of measures to help low-income households, including energy subsidies and higher scrappage bonuses for the purchase of cleaner vehicles.