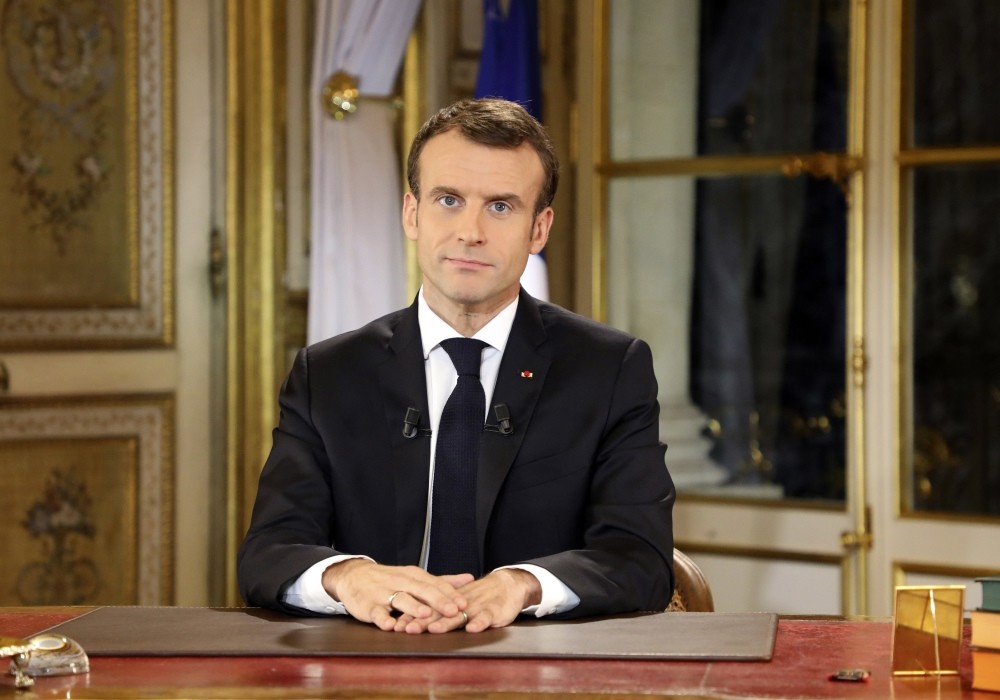 French President Emmanuel Macron poses before a special address to the nation, at the Elysee Palace, Paris, Dec. 10.
by Compiled from Wire Services Dec 12, 2018 12:00 am

Groups of yellow vest protesters across France responded scathingly to concessions offered by President Emmanuel Macron in a speech intended to defuse their revolt. "Nonsense," "a charade," "a bluff" and "a drop in the ocean," were among the immediate reactions that greeted the head of state's televised speech on Monday evening. At a roundabout in the southern town of Le Boulou, some 150 yellow vests gathered around a loudspeaker listened carefully to the president's words before starting to shout in chorus. "He is trying to do a pirouette to land back on his feet but we can see that he isn't sincere, that it's all smoke and mirrors," Jean-Marc, a car mechanic, told Agence France-Press (AFP). Some yellow vests however acknowledged Macron's efforts, seeing "an awareness" of their problems in the presidential speech.

The French left as well as the far right have also dismissed Macron's concessions. Radical leftist leader Jean-Luc Melenchon and Socialist Party leader Olivier Faure both denounced Macron for taking measures that would be paid for by ordinary people rather than those with "great wealth." Melenchon held out the prospect of a fifth round of protests next Saturday: "Act V of the beginning of the citizen revolution in this country, will be a big mobilization."

Over 21 million people watched a visibly contrite Macron declare a "state of economic and social emergency" in his televised address, promising billions of euros in aid for the lowest earners. It was a stark retreat for the 40-year-old former investment banker, who until now had vigorously argued his tax policies and economic reforms were the only way to prepare France for the challenges of the 21st century. In his speech, Macron said: "We probably have not been able for a year-and-a-half to bring quick enough and strong enough responses." Macron also acknowledged he may have given an impression "not to care" about the concerns of ordinary citizens and "might have hurt" some people with his comments. The French President is perceived by many in France as arrogant, for instance telling an unemployed man he could find a job if he "crosses the street" and advising a retiree not to complain.

The new measures, including a 100-euro jump in the minimum wage next year, are expected to cost up to 11 billion euros ($12.5 billion), and are likely to put France on a collision course with Brussels. The government had already scrapped fuel tax increases set for January, a core demand of the yellow vests, which will cost a further 4.5 billion euros. The country's deficit is likely to exceed the EU's mandated 3.0 percent of GDP limit at least "temporarily," Richard Ferrand, the parliament president from Macron's Republic on the Move party, told RTL Radio.