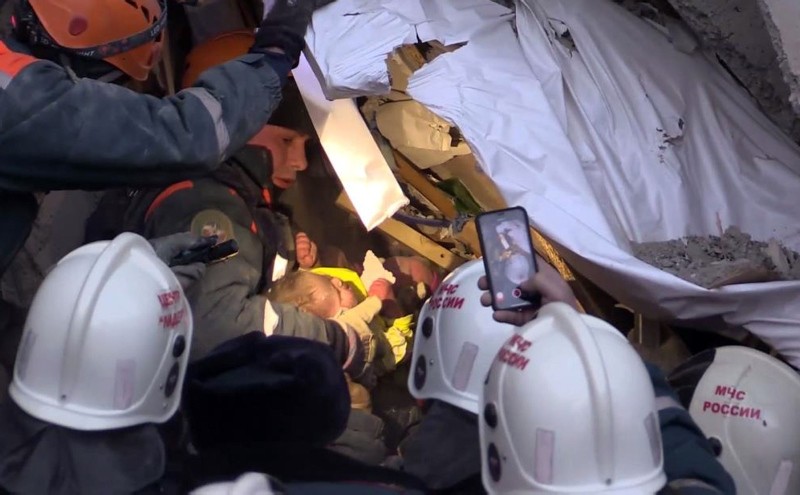 This handout picture released by The Russian Emergency Situations Ministry on January 1, 2019, shows emergency officers transporting a baby surviver after a gas explosion rocked a residential building in Magnitogorsk. (AFP Photo)
by Jan 01, 2019 12:00 am

Russian rescuers on Tuesday pulled a baby boy alive from the ruins of an apartment block that collapsed in a gas explosion more than a day earlier, killing at least eight people and leaving dozens missing.

"The rescuers heard crying. The baby was saved by being in a cradle and warmly wrapped up," Chelyabinsk regional governor Boris Dubrovsky wrote on his Telegram channel.

The emergencies ministry named the child as a 10-month-old boy after initial reports that a girl had been found.

The emergency services posted a video of rescuers slowly prizing apart concrete panels, pulling out the child, who can be seen blinking, and running with him wrapped in a blanket to an ambulance.

The mother of the boy, named as Ivan Fokin, also survived the blast and has seen her son, the emergency services said.

The child is in an extremely grave condition with serious frostbite to his limbs, a head injury and multiple leg fractures and he will be evacuated for treatment in Moscow, a health ministry statement said.

Part of the 10-story apartment building collapsed following the gas explosion on Monday morning in the industrial city of Magnitogorsk, nearly 1,700 kilometers (1,050 miles) east of Moscow in the Ural Mountains.

The baby was found after rescuers were forced to temporarily halt the search for dozens of missing people in the rubble for fear the rest of the block could come down.

The child survived temperatures that fell overnight to around minus 27 degrees Celsius (minus 16 degrees Fahrenheit), TASS reported.

So far the incident has claimed at least eight lives and only six survivors have been found, including a 13-year-old boy.

The Soviet-era apartment block was home to around 1,100 people. The blast completely destroyed 35 flats while 10 more were damaged. Residents left homeless were evacuated to a nearby school.

Battling the freezing temperatures, rescuers had worked through the night combing through debris and trying to stabilize the remaining walls.

But on Tuesday morning, the head of Russia's emergencies ministry, Yevgeny Zinichev, said the operations on the ground had to be temporarily halted.

There is a "real threat of part of the building collapsing", Zinichev said.

"It's impossible to continue working in such conditions."

Rescuers removed dangerous overhanging debris and were using heavy machinery to shift rubble in an operation that would continue all night, officials said.

As the search continued, officials said they had found eight bodies, all of them adults, while another 35 people remained unaccounted for.

Regional governor Dubrovsky announced a day of mourning on January 2, with flags lowered and entertainment events cancelled, as the disaster toll set a somber mood in Russia where New Year's Eve celebrations are the biggest annual festivities.

President Vladimir Putin on Monday rushed to the scene, where the blast left hundreds of residents homeless in the cold.

"It is in the character of our people, despite New Year's festivities, to remember to think of the dead and wounded at this moment," a grim-looking Putin said.

"I went out to have a cigarette at quarter-to-six," a local man told Russian television. "There was a blast and a wave of fire... then people started running out."

Other witnesses said the explosion was strong enough to shatter the windows of nearby buildings.

"I woke up and felt myself falling. The walls were gone. My mother was screaming and my son had been buried," said another witness.

Located in the mineral-rich southern Urals region, Magnitogorsk, with a population of more than 400,000 people, is home to one of the country's largest steel producers.

Investigators have opened a criminal probe into the accident, with the FSB security service confirming the blast was the result of a gas explosion.

Such deadly gas explosions are relatively common in Russia where much of the infrastructure dates back to the Soviet era and safety requirements are often ignored.