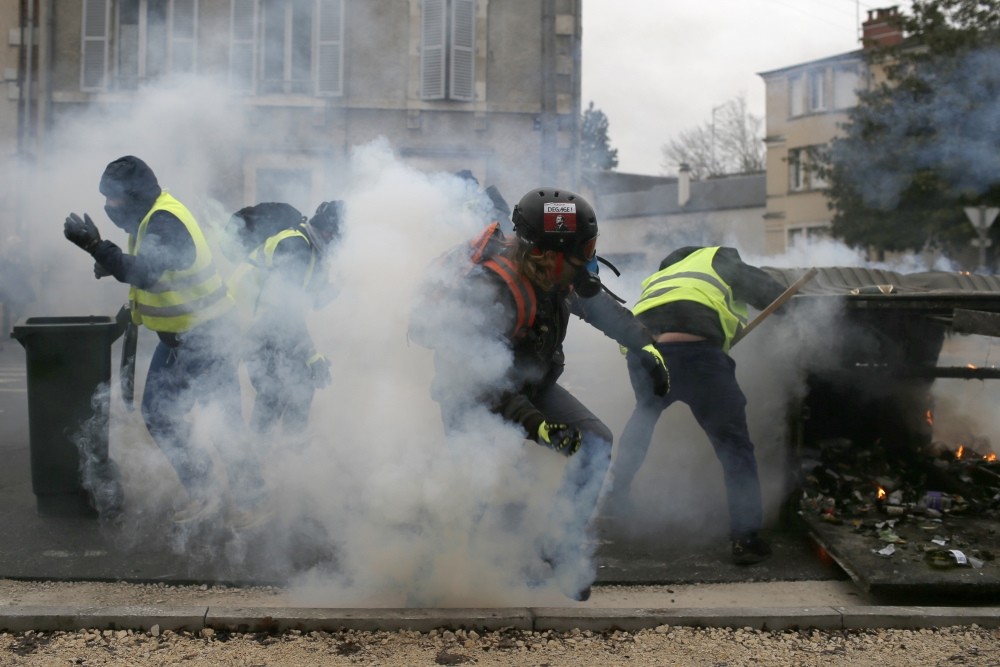 The French government has taken action to stop the months-long violence in the streets during ‘yellow vest' protests with ‘anti-hooligan' bill, which restricts the use of masks during demonstrations

French lawmakers have backed a bill banning protesters from hiding their faces during demonstrations, reinforcing President Emmanuel Macron's efforts to push back against violent members of the "yellow vest" movement. Protesters wearing masks or covering faces during demonstrations will face one year of imprisonment and fines of up to 15,000 euros, according to the bill.

The French National Assembly also approved local governors to prohibit the participation of those who pose a threat to public order in demonstrations. Those who violate the restriction and participate in protests despite the ban could face six months in prison and 7,500 euros in fines.

Addressing the lower house National Assembly, Interior Minister Christophe Castaner urged members to "stop the brutes ... [who listen] only to their hunger for chaos."

While President Emmanuel Macron's party, which has a large majority in parliament, backed the "anti-hooligan" bill during the vote, leftist opponents accused the government of impinging on civil liberties.

"We're not restricting freedoms, we're ensuring that freedoms can be guaranteed," Aurore Berger, a spokeswoman for Macron's La Republique En Marche party told BFM TV on Thursday, hours after the overnight vote. "We're not talking about any French citizen chosen at random, we're talking about those who have hurt others, those who want to kill and destroy property."

The draft law backed by Prime Minister Edouard Philippe earlier this month, proposed stricter punishments for activists, including imprisonment, fines and protest bans, is expected to secure approval next week. It is expected that the government will stiffen its stance against the "yellow vest" protestors across the country through the bill.

The yellow vest movement originally started against fuel tax hikes but has snowballed into a wider revolt against a president and government accused of being out-of-touch with ordinary people. Rioters ran amok in Paris during the early street protests, torching cars, smashing luxury boutiques and defacing the Arc de Triomphe.

It was among the worst violence the capital has experienced since a 1968 student uprising. Violent clashes with police have persisted on the fringes of weekly marches in Paris, Toulouse, Bordeaux and other cities. At least 10 people have died in the protests, around 6,000 have been detained, and over 2,000 others have been injured.

Many of the yellow vest demonstrators are demanding that centrist President Emmanuel Macron resign, a demand dismissed as undemocratic by the government. Macron made multiple concessions that failed to extinguish the anger of the yellow vest movement, which is named after the fluorescent protective garments the protesters wear. He abandoned the tax hike and announced last month a series of measures to boost purchasing power. The package, estimated at 10 billion euros, includes a 100-euro monthly increase to the minimum wage.