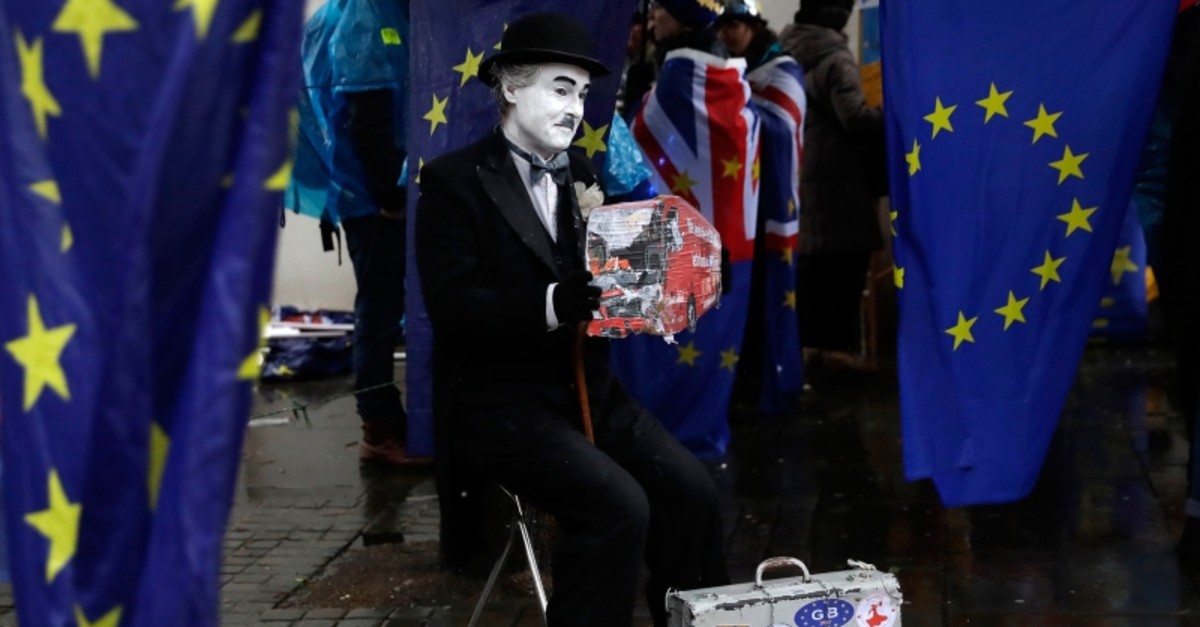 Anti-Brexit remain in the European Union supporters take part in a protest under a heavy rain outside the House of Parliament in London, Tuesday, March 12, 2019. (AP Photo)
by Mar 12, 2019 12:00 am

The European Union will not negotiate Brexit again, it said on Tuesday, after Britain's parliament rejected the divorce package for a second time in a vote that made a chaotic no-deal scenario more likely.

"The EU has done everything it can to help get the Withdrawal Agreement over the line," Brexit negotiator Michel Barnier said after the House of Commons vote.

"The impasse can only be solved in the U.K. Our 'no-deal' preparations are now more important than ever before."

In coordinated statements, European Council President Donald Tusk and the bloc's executive European Commission said the EU had done "all that is possible to reach an agreement ... it is difficult to see what more we can do."

The bloc insists the divorce deal - already rejected by parliament in January - will not be revisited.

It expects Prime Minister Theresa May to ask for a delay to Brexit to avoid economic disruption should Britain leave with no plan in place.

"With only 17 days left to March 29, today's vote has significantly increased the likelihood of a 'no-deal' Brexit," the EU said.

"Should there be a U.K. reasoned request for an extension, the EU27 will consider it and decide by unanimity. The EU27 will expect a credible justification for a possible extension and its duration," it said, adding that any Brexit delay must not interfere with EU parliamentary elections due on May 24-26.

EU envoys from the remaining 27 member states were due to meet at 0800 GMT on Wednesday to discuss next steps.

While a short Brexit delay is acceptable to the EU, few in the bloc believe it would be enough to break the deadlock in Britain's government, parliament and the wider country, all split in half on Brexit.

Commission head Jean-Claude Juncker said on Monday Britain must leave on May 23 at the latest or would have to take part in the EU elections.

Typical of the exasperation felt in Brussels, one EU diplomat said: "What credibility does she (May) have left? Why would EU leaders engage with her again after yet another failure? This really needs to end."

But there were some more sanguine voices too, with Ireland's foreign minister calling for patience and another national EU diplomat saying: "There is still more drama to be had - and then we'll see."

An EU lawmaker dealing with Brexit, Philippe Lamberts said the U.K. needed a second referendum or make a U-turn and seek to remain in the EU's customs union after Brexit to break the deadlock.

"The EU has gone to every length to try and accommodate the U.K. government's red lines," he said.

"We cannot continue to witness Theresa May's travelling circus of CO2 and hot air to Brussels, London, Dublin and Strasbourg, so long as Westminster is unable to agree with itself."