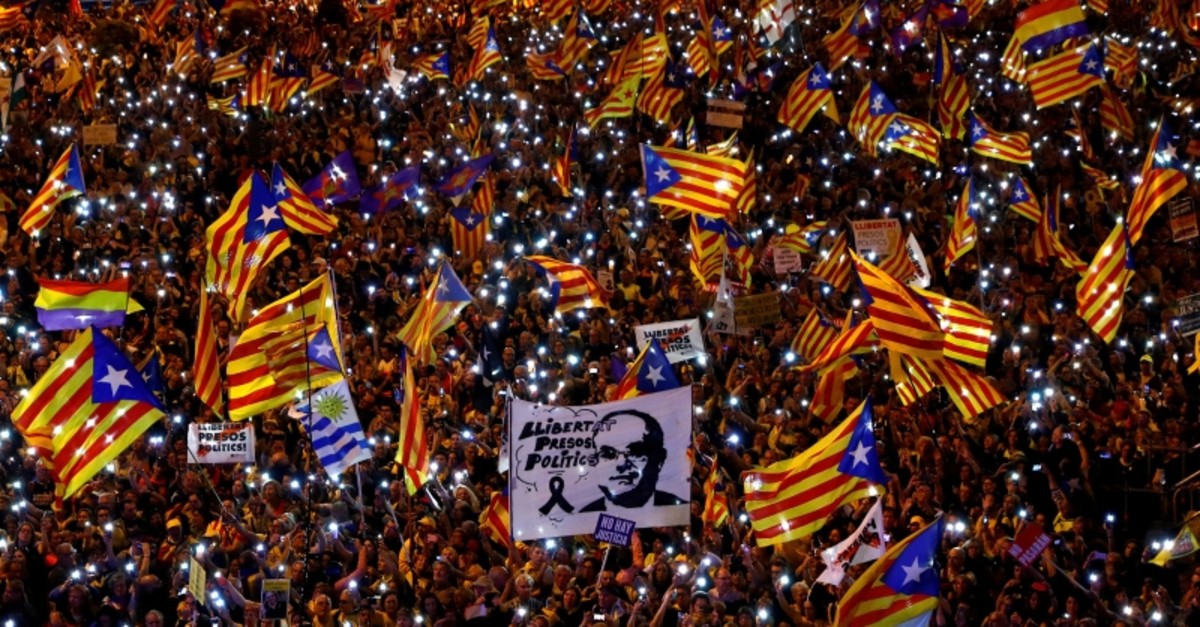 People take part in a rally of Catalan separatist organisations to demonstrate against the trial of Catalan leaders and call for self-determination rights, in Madrid, March 16, 2019. Banner reads ,Freedom for political prisoners., (Reuters Photo)
by Associated Press Mar 16, 2019 12:00 am

Thousands of people marched Saturday in Madrid to support Catalan politicians and activists who are on trial for their attempts to secede from Spain in October 2017.

The nine defendants face decades in prison on rebellion and other charges for staging a banned independence referendum for the northeastern region and pushing ahead with an independence declaration that Madrid deemed unconstitutional.

Large pro-independence protests have filled the streets of Spain's northeastern region of Catalonia and some European cities, but Saturday's was the first major separatist march in the Spanish capital since 2012.

Organizers said 120,000 people attended, well beyond their expectations. Police put the number of marchers at around 18,000 and said no incidents were reported. It was not possible to reconcile the different crowd estimates.

A banner reading "Self-determination is not a crime" opened the demonstration, with Catalan politicians leading the way. Speaking to reporters at the scene, Catalonia's regional president said the march in Madrid was needed in order to decry a trial that he described as a "farce."

Many separatists in Catalonia believe the defendants in the Supreme Court case are political prisoners who are being tried for their ideas. Spain says the judicial process is fair and that its courts are fully independent from the government.

The trial is about to enter the fifth week of hearings. The proceedings in Madrid are being closely followed across the country, with media broadcasting live lengthy testimonies by defendants and witnesses and radios hosting in-depth debates about prosecution strategies.

A sentence is not expected until after Spain's April 28 general election.

The issue of Catalan independence versus Spanish unity is a major topic for voters. The failed Catalan independence declaration in 2017 set off Spain's most serious constitutional crisis in decades since the transition to democracy in the 1970s after the death of dictator Francisco Franco.