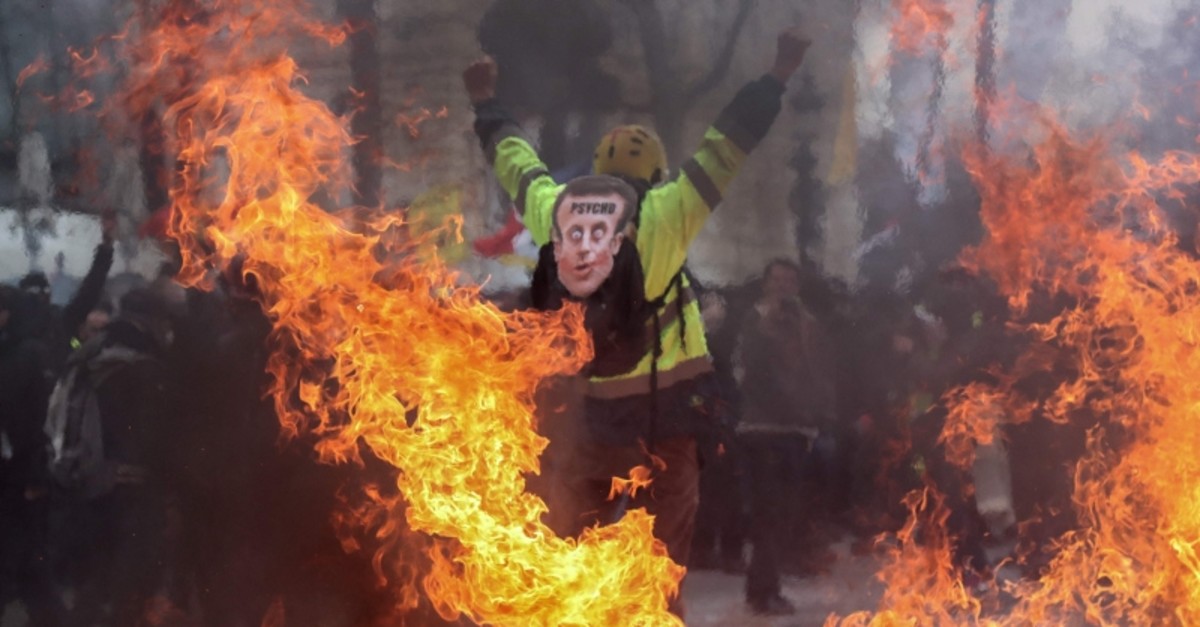 A Yellow Vest protester wearing a mask depicting the French President on which is written 'psycho', gestures behind flames rising from barricades, in Paris on March 16, 2019 (AFP Photo)
by Associated Press Mar 16, 2019 2:35 pm

French yellow vest protesters clashed Saturday with riot police near the Arc de Triomphe as they kicked off their 18th straight weekend of demonstrations against President Emmanuel Macron.

After dwindling numbers in recent weekends, protesters are hoping their latest protest can breathe new life into their 4-month-old movement against a president seen as favoring the elite.

Protesters threw smoke bombs and other objects at officers along the Champs-Elysees — scene of repeated past rioting — and started pounding on the windows of a police van. Riot police then retreated, as did a water cannon, with protesters kicking the side of the large truck.

Later, the water cannon unleashed bursts from a side street to try to push back protesters clustered between a Cartier boutique and a Mont Blanc store.

A burning vehicle was seen in a nearby neighborhood where another protest group gathered.

Demonstrators looted stores on the Champs-Elysees avenue in Paris later on Saturday. 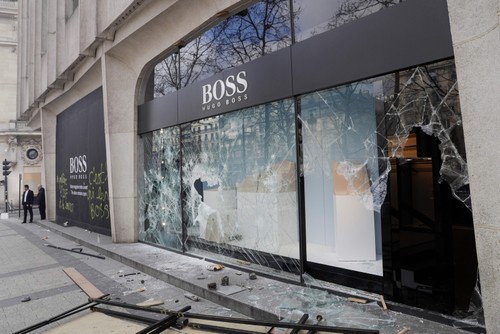 Paris police told The Associated Press that 20 people were arrested by midmorning. Bracing for a potential uptick in protester numbers and violence, the French capital deployed more police Saturday than in previous weekends. Police closed down several streets and fanned out around the Right Bank.

Yellow vest groups representing teachers, unemployed people and labor unions were among those that organized dozens of rallies and marches Saturday in the capital and around France.

The actions mark the end of a two-month national debate that Macron organized to respond to protesters' concerns.

Protesters dismiss the debate as empty words and a campaign ploy by Macron for European Parliament elections in May. They are angry over high taxes and Macron policies seen as coddling the business world.

In their online appeal for Saturday's protests, organizers said they want the day to serve as an "ultimatum" to "the government and the powerful."