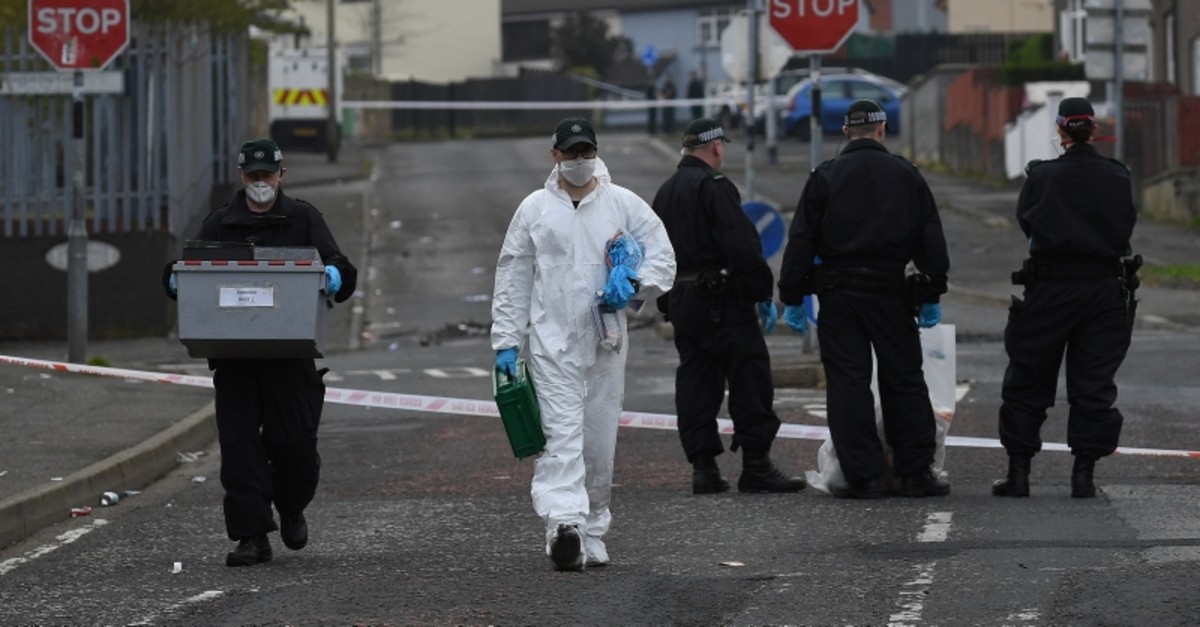 Police officers carry a box of evidence as they leave the scene where the 29-year-old journalist Lyra McKee was shot dead, in Londonderry, Northern Ireland April 19, 2019. (Reuters Photo)
by Apr 20, 2019 11:11 pm

Two young men have been arrested over the killing of a journalist shot dead in Northern Ireland, police said Saturday, after the murder triggered international condemnation.

The 18- and 19-year-old men were arrested in Derry, also known as Londonderry, under anti-terror laws and taken to Belfast for questioning, the Police Service of Northern Ireland said.

Journalist Lyra McKee, 29, was shot in the head late Thursday in Derry by, police believe, dissident republicans linked to the New IRA paramilitary group as they clashed with police in Northern Ireland's second city.

Detectives hunting the gunman released security camera footage of the rioting on Derry's Creggan estate, hoping its publication would help trace her killers.

The footage showed McKee standing with other reporters by a police vehicle, and the suspected gunman coming around a corner.

Detective Superintendent Jason Murphy, who is leading the investigation, said Saturday that police conducted a number of searches as part of the probe.

"Lyra was murdered by terrorists. I believe that the people responsible are members of the New IRA," he said.

Murphy said there was a "new breed of terrorist coming through the ranks". He added that the situation was very worrying and "the brutal nature of the attack has sent shockwaves around the world."

"Lyra was killed by shots that were fired indiscriminately," he said.

"The shots were fired in a residential area at a time when there were large numbers of local people on the street including children. The gunman showed no thought for who may have been killed or injured."

He said McKee's family and partner were "absolutely devastated" and appealed to the public for help to find those who killed her.

The "New IRA" is a republican paramilitary group opposed to the shift towards non-violent tactics to bring about a united Ireland.

Catholic priest Father Joseph Gormley, who read the last rites for McKee, told BBC radio: "This rioting was clearly orchestrated. I have no problems saying that: everybody in our community knows that.

"We have a small group of people who want to play political games with our lives."

The IRA sought Northern Ireland's integration into the Republic of Ireland through violence.

The group called a final ceasefire in 1997 and announced an end to its armed campaign in 2005, stating that it would seek to achieve its aims through peaceful political means.

The 1998 Good Friday peace deal largely brought an end to three decades of sectarian bloodshed in Northern Ireland between republican and unionist paramilitaries, as well as British armed forces, in a period known as "the Troubles".

There have been concerns that paramilitaries could be seeking to exploit the current political turbulence over Northern Ireland and its border with the Republic of Ireland caused by Brexit.

Michel Barnier, the EU's chief Brexit negotiator, said the killing was "a reminder of how fragile peace still is in Northern Ireland. We must all work to preserve the achievements of the Good Friday Agreement."

Former US president Bill Clinton tweeted: "Heartbroken by the murder of Lyra McKee and the violence in Derry.

"The challenges in NI today are real-but we cannot let go of the last 21 years of hard-won peace and progress. This tragedy is a reminder of how much everyone has to lose if we do."