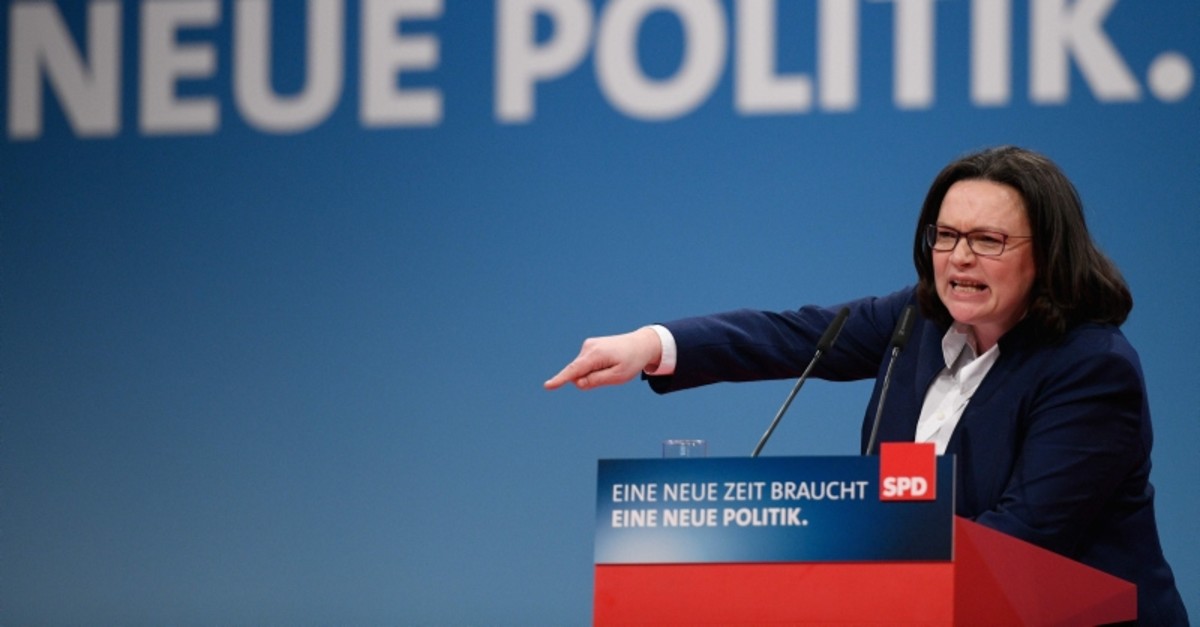 German Chancellor Angela Merkel said on Sunday she wants the government coalition to continue despite the surprise announcement by Social Democratic Party (SPD) leader Andrea Nahles that she is to resign as head of the center-left party.

"We will continue the work of government with all seriousness. And above all with a great sense of responsibility," Merkel said.

The issues that the government has to solve are still on the table — in Germany as well as in Europe and the rest of the world, she added. "And in this spirit we will continue to work."

Merkel's replacement as leader of the senior coalition party, the conservative Christian Democrats (CDU), Annegret Kramp-Karrenbauer appealed to the SPD, the junior partner in the coalition, not to endanger the stability of the government.

Kramp-Karrenbauer said she assumes that the SPD will quickly meet the necessary decisions to replace Nahles so that "the ability of the grand coalition to act is not affected."

"This is not the hour of tactical party considerations. We continue to stand by the grand coalition," she said, referring to the alliance between the CDU, its Bavarian sister party the CSU and the SPD that was formed after the 2017 general election.

The third coalition party also wants to stick with the current government arrangement. "We expect the SPD to contribute to Germany keeping a stable government," CSU head Markus Soeder told dpa on Sunday.

Nahles said she would formally declare her resignation as the SPD's first female leader to senior party figures on Monday.

"Discussions within the party parliamentary group and feedback from the party have shown me that the support necessary for me to carry out my offices is no longer there," Nahles said on Sunday, following a week of intense pressure after the EU elections delivered the party's worst-ever nationwide result.

The SPD, which is the junior partner in Chancellor Angela Merkel's grand coalition, garnered just 15.8% of votes in the elections to the European Parliament, falling behind the environmentalist Greens for the first time.

The SPD leader said she would also give up her role as head of the party parliamentary group on Tuesday.

"Together we made a decision to take responsibility for our country as part of the government," Nahles said of the move, which was criticized by voices on the left of the party, particularly its youth wing, who wanted to see the SPD go into opposition.

"At the same time, we are working on building the party back up and to convince citizens with new messages," Nahles added.

The CDU party's leadership called on its own party to be prudent in the face of Nahles' announcement, sources told dpa.

Leading party figures said everyone in the CDU should make clear their commitment to the government's mandate, the sources added.

The center-right party is due to meet later Sunday to discuss the beating they too sustained in the EU poll.

Kramp-Karrenbauer acknowledged that unlike the Greens, who saw a surge in support, her party was unable to attract young people and had not spoken to voters' fears about climate change.