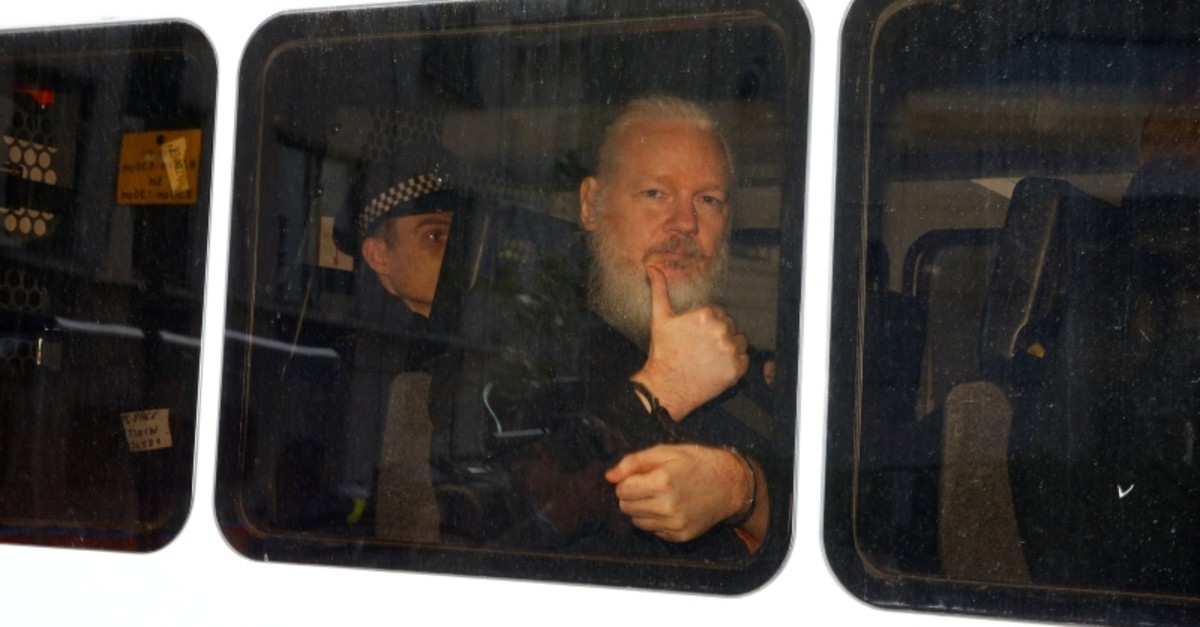 WikiLeaks founder Julian Assange is seen in a police van after was arrested by British police outside the Ecuadorian embassy in London, Britain April 11, 2019. (Reuters Photo)
by French Press Agency - AFP
Jun 13, 2019 8:11 pm

Britain's interior minister said Thursday he had certified the U.S. request to extradite WikiLeaks founder Julian Assange on espionage grounds in a procedural move that opens the way for a court battle.

The U.S. Justice Department confirmed on Tuesday that it had submitted a formal extradition request. British Home Secretary Sajid Javid said he signed it on Wednesday.

The final decision on whether Assange can be extradited will rest with the courts. The next hearing in the Australian former computer hacker's case is on Friday.

The 47-year-old had been sheltering in Ecuador's embassy in London for seven years until his arrest on April 11 when Quito finally withdrew his asylum.

He is now serving a 50-week sentence in jail for skipping bail when he entered the embassy in 2012.

"I'm very pleased that the police were finally able to apprehend him and now he's rightly behind bars because he broke U.K. law," Javid told BBC radio.

"There's an extradition request from the U.S. that is before the courts tomorrow but yesterday I... certified it.

"I want to see justice done at all times and we've got a legitimate extradition request, so I've signed it, but the... decision is now with the courts."

If basic criteria are met, the home secretary must certify a valid extradition request from the United States before the courts make a decision on whether the person can be extradited.

The secretary then decides whether to order an extradition.

Assange, who is being held in the top-security Belmarsh prison in southeast London, is not expected to attend Friday's hearing in person but could take part via video-link, although it will be largely procedural.

The "first real confrontation of arguments" in court will not be for several weeks or months, according to WikiLeaks editor Kristinn Hrafnsson.

Washington has accused Assange of violating the U.S. Espionage Act by publishing military and diplomatic files in 2010.

The 18 charges reject his claim he was simply a publisher receiving leaked material — which would be protected under press freedom legislation.

The case has upset some U.S. and other world media, which argue that Assange's activities differ very little from their own. They fear his case could set a precedent for limiting free speech and media rights.