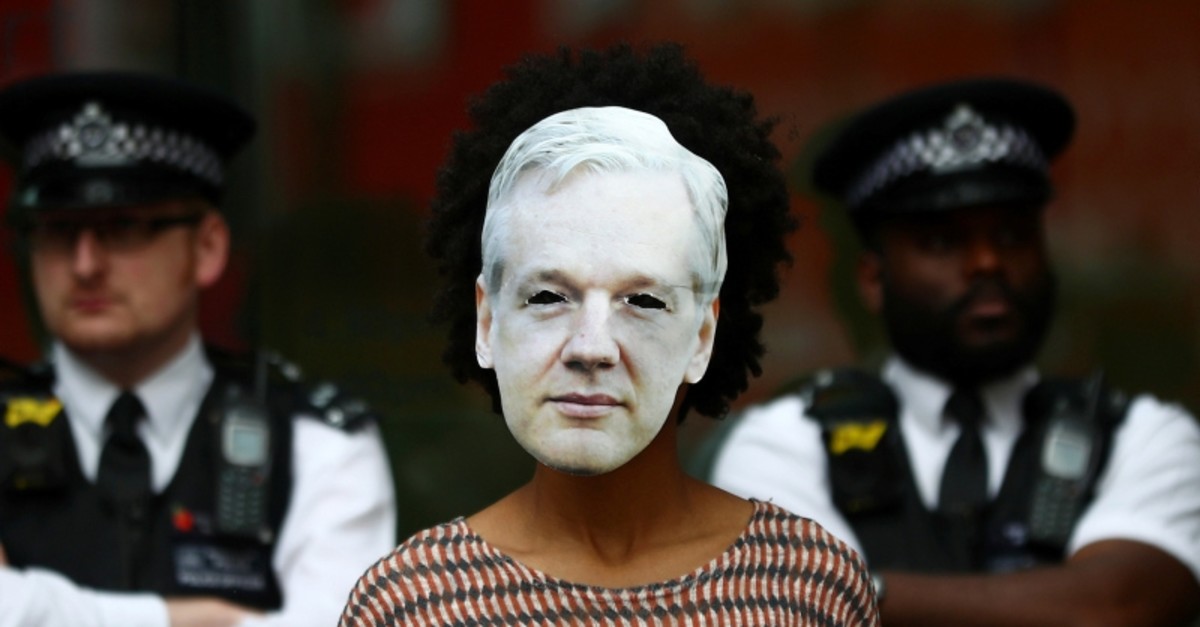 Police watch an Assange supporter wearing a mask and protesting at Westminster Magistrates Court in London, Friday, June 14, 2019. (REUTERS Photo)
by Associated Press
Jun 14, 2019 3:11 pm
A British court has set a date early next year for WikiLeaks founder Julian Assange to face a U.S. extradition attempt over his role in revealing classified government and military information.

The judge at Westminster Magistrates' Court on Friday set a full extradition hearing for Feb. 25, 2020. It is expected to last about five days. Interim hearings are expected in July and October.

Assange, who has been suffering from ill health in prison, appeared in court via video link. He appeared to be tired and showed signs of a possible hand tremor. He was again sporting a gray-white beard after having shaved it off before his last court appearance.

Ben Brandon, a British lawyer representing the U.S. government, told a hearing that the case "related to one of the largest compromises of confidential information in the history of the United States."

U.S. officials are seeking to prosecute Assange under the Espionage Act, blaming him for directing WikiLeaks' publication of a huge trove of secret documents that disclosed the names of people who provided confidential information to American and coalition forces in Iraq and Afghanistan.

The 47-year-old Australian hacker is currently in Belmarsh Prison on the outskirts of London serving a 50-week sentence for jumping bail in Britain. His legal team is appealing that sentence. He also faces questioning from Swedish prosecutors investigating a rape allegation.

Assange faces 18 charges from the U.S., including conspiracy to hack into government computers.

Citing the possible maximum prison term he could face if convicted on all counts, Assange said: "One hundred and seventy-five years of my life is effectively at stake."

Assange complained about what he characterized as inaccurate reporting on his case, citing the BBC in particular, and saying the press has mistakenly reported that he is accused of computer hacking.

"That's false," he told Judge Emma Arbuthnot, asserting that the U.S. government has not accused him of hacking.

However, Brandon told the judge that the U.S. case does include a hacking charge. The judge agreed and said it is her understanding that there is a hacking charge and suggested Assange discuss it with his lawyers.

Assange also complained that he has not yet received the full U.S. indictment against him because his lawyers aren't allowed to give him documents and can only send him papers through the mail.

Arbuthnot said the paperwork only arrived Thursday and that "no one" has had a chance to fully read it.

Assange asserts that he is a journalist with First Amendment protections and the U.S. decision to use espionage charges against him has alarmed many free speech advocates.