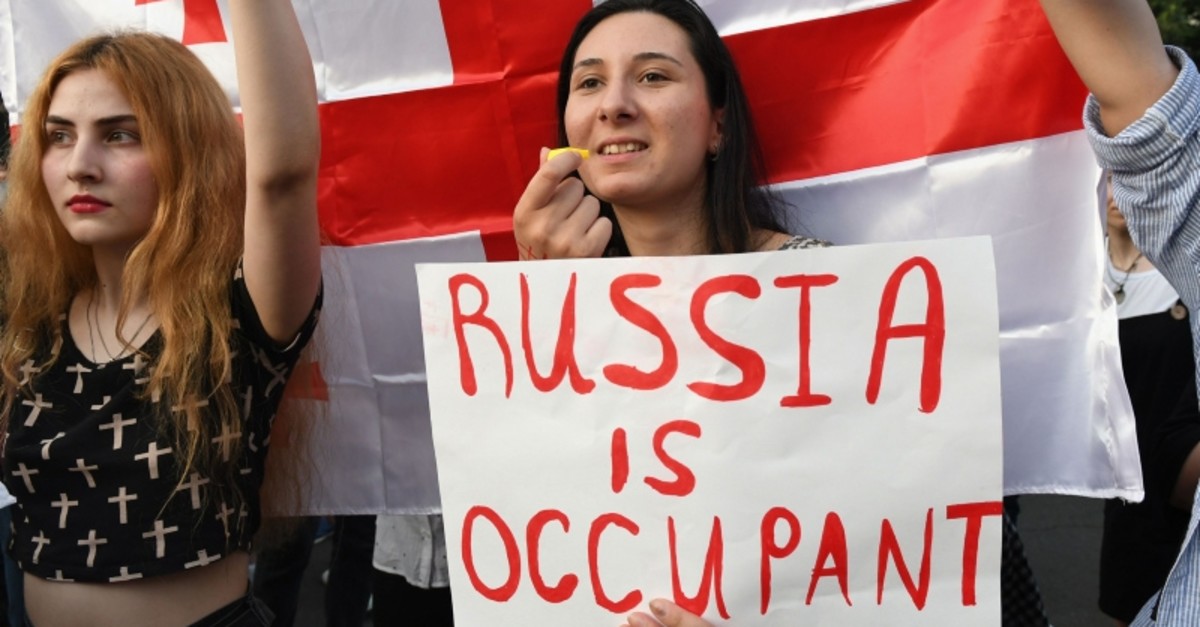 Protesters hold signs and wave Georgian national flags during a rally in front of the parliament building in Tbilisi, Georgia, June 21, 2019. (AFP Photo)
by Compiled from Wire Services
Jun 21, 2019 10:59 pm

The decree on the suspension, published Friday on the Kremlin's website, said the ban would begin July 8 and would be "temporary." The reason behind the delayed implementation was not clear and the decree did not state what terms would need to be met for flights to resume.

The decree also ordered officials to take measures to ensure the return of Russians who are temporarily in Georgia.

In Tbilisi, protesters took to the streets for a second day Friday calling for snap parliamentary polls and the ruling party's oligarch leader to cede power following a police crackdown that left 240 people injured.

About 15,000 people gathered outside parliament to express anger over the behind-the-scenes rule of Georgia's richest man Bidzina Ivanishvili and his Georgian Dream party.

The demonstrations followed an uproar over a Russian lawmaker giving an address to parliament from the speaker's seat on Thursday — a hugely controversial move in an ex-Soviet country that fought a war with Russia in 2008.

Tensions between the two countries remain high after used its military to back breakaway Georgian regions of Abkhazia and South Ossetia and later formally recognized their independence.

Protesters brandished placards reading "Stop the USSR" and "Don't shoot at us — we are your children".

The protests have morphed into a broader movement against the authorities, mainly Ivanishvili who is thought to control power in the Western-backed state.

According to the health ministry, at least 160 demonstrators and 80 police officers were injured Thursday when police fired rubber bullets and tear gas at the crowds. More than 300 people were arrested.

On Friday, the head of Georgia's parliament quit under pressure from demonstrators.