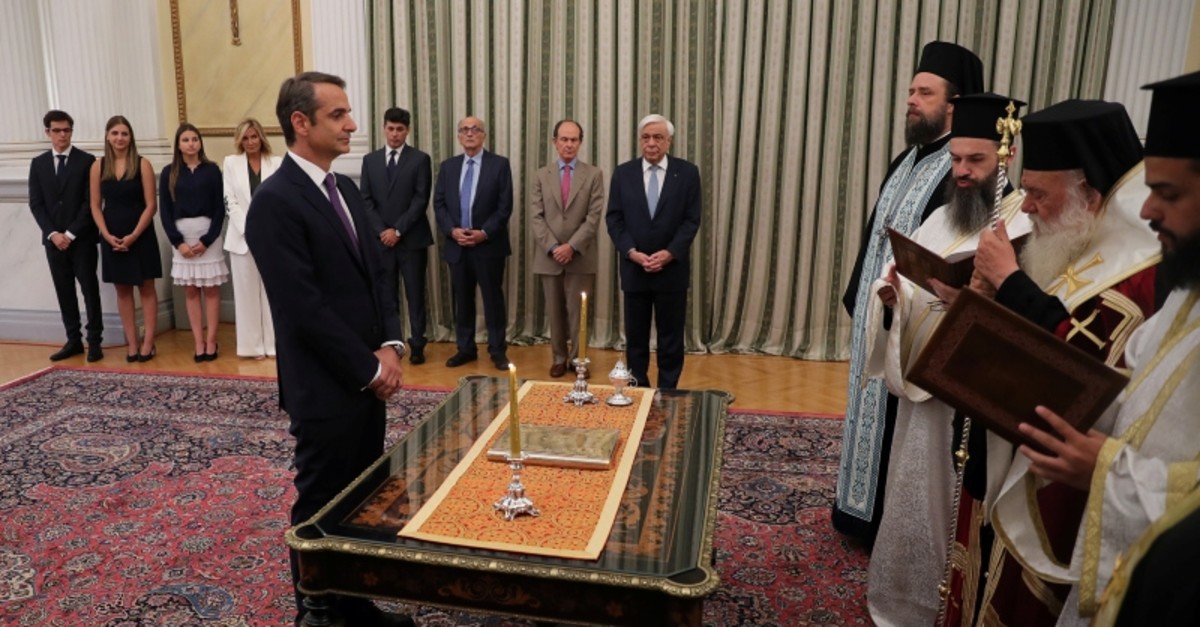 Leader of New Democracy conservative party and winner of Greek general election Kyriakos Mitsotakis is sworn in as prime minister during a ceremony at the Presidential Palace in Athens, Greece July 8, 2019. (Reuters Photo)
by Compiled from Wire Services Jul 08, 2019 1:14 pm

Conservative party leader Kyriakos Mitsotakis was sworn in as Greece's new prime minister Monday, a day after his resounding win over left-wing Alexis Tsipras, who led the country through the tumultuous final years of its international bailouts.

Mitsotakis' New Democracy party won 39.8% of the vote, giving him 158 seats in the 300-member parliament, a comfortable governing majority. Tsipras' Coalition of the Radical Left, or Syriza, garnered 31.5%. The extremist right-wing Golden Dawn, Greece's third largest party during the height of the financial crisis, failed to make the 3% threshold to enter parliament.

Mitsotakis will have to move fast to deal with the myriad of problems still plaguing the economy. Europe's finance ministers are meeting in Brussels on Monday and will be discussing Greece, which still has stringent fiscal targets to meet even though it no longer directly receives bailout loans.

"I assume the governance of the country with full awareness of the national responsibility," Mitsotakis said in his victory speech Sunday night. "I know of the difficulties that lie ahead for me and for my associates. But I draw strength from the strength of the people."

Greece's economy shrank by a quarter and poverty and unemployment levels soared during the country's nearly decade-long financial crisis. Although its finances are on the mend and the economy is expected to grow by 2.2% this year, it still has a long way to go to make up the economic output lost.

The country's debt stands at about 181% of annual GDP and Greece has pledged to continue producing large primary surpluses — the budget excluding debt servicing — of more than 3% of GDP for years to come.

Mitsotakis said Sunday he would stick to his campaign pledges of lowering taxes, attracting investments and cutting through red tape to make Greece more business-friendly.

"New Democracy's clear victory in Greece's parliamentary elections yesterday will be welcomed by investors," said economics consultancy Capital Economics in a research note. "But it will not be a game changer for the economy, not least because the government will still be constrained by its membership of the single currency and its 'surveillance' agreement with the EU."

That caution was evident in the performance of the main stock market in Athens, which was down 1.4% in midday trading Monday as investors booked profits generated during the recent rally that was largely based on expectations of a Mitsotakis victory.

Mitsotakis will also have to contend with pension increases and other benefits the outgoing government granted ahead of European elections in May — benefits which European creditors had warned could make Greece's fiscal targets hard to meet.

"Although Greece exited its third bailout in mid-2018, it is subject to 'enhanced surveillance' which bears a striking resemblance to a bail-out program," Capital Economics said. "For example, the government will get further relief on the cost of servicing its public debt only if it sticks to tight fiscal policy."

Mitsotakis is expected to name his cabinet later in the day. The ministers would then be sworn in on Tuesday.

Mitsotakis is the son of former prime minister Konstantinos Mitsotakis, one of the country's longest-serving parliamentarians. His sister, Dora Bakoyannis is a former minister and Athens' first female mayor.

Konstantinos Mitsotakis, who passed away in 2017, and was in power from 1989 to 1992 had good relations with the then Turkish Prime Ministers Süleyman Demirel and Turgut Özal. After the 1967 Greek military Junta coup, he fled to Turkey and later France.

Compared to Tsipras, the new Prime Minister Mitsotakis is seen by the people as more serious, better educated and more conservative, as well as a lover of the ideals of the EU.

He took charge of the New Democrats three years ago. Following the election, his party will have a majority of 158 seats in the 300-member parliament.

New Democracy was last in power in 2014, in coalition with the Greek socialists.

Syriza's parliamentary presence will shrink from 144 seats to 86. Tsipras has promised to remain an "active" voice in opposition.

Sunday's election was Greece's third in as many months.

In May, New Democracy beat Syriza by nearly 9.5 points in European parliament elections. A week later, it completed a near-sweep of Greek regions in local elections. After that, Tsipras was forced to call an early general election.

"A painful cycle has closed," Mitsotakis said in a televised address immediately following his electoral victory, adding that Greece would "proudly raise its head again" on his watch.