Merkel seen shaking for third time in a month 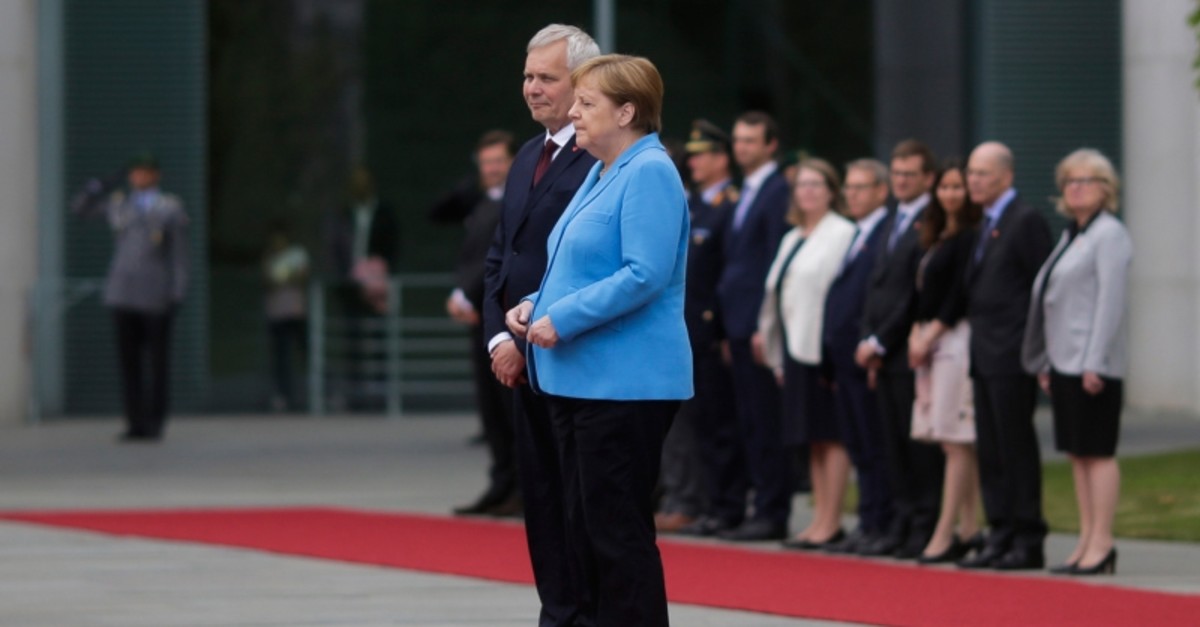 German Chancellor Angela Merkel and Prime Minister of Finland Antti Rinne listen to the national anthems at the chancellery in Berlin, Germany, Wednesday, July 10, 2019. (AP Photo)
by Compiled from Wire Services Jul 10, 2019 3:16 pm
German Chancellor Angela Merkel was seen trembling in public for a third time in less than a month, triggering further speculations about her health.


A deputy government spokeswoman dismissed concerns about the chancellor's health.

"The chancellor is fine," Ulrike Demmer told reporters, adding that Merkel had a meeting with Rinne as planned, following the ceremony.

It followed similar episodes on June 18 and June 27. As in both those cases, the incident started as she stood still without talking, and the 64-year-old recovered quickly as she started walking.

The first incident happened in near-identical circumstances as she stood alongside Ukrainian President Volodymyr Zelenskiy at a military honors ceremony. The weather that day was hot, and Merkel said afterward that she was fine after drinking three glasses of water.

The second incident happened at the German president's palace as she listened to his comments on the swearing-in of a new justice minister. Temperatures were much cooler that day, as they were on Wednesday.

Merkel, who has been German leader since 2005, turns 65 on July 17. She suggested that the psychological impact of the first incident was responsible for the subsequent episodes.

"I am fine," she told reporters after her meeting with Rinne. "I said recently that I am in a phase of processing the last military honors with President Zelenskiy. That is clearly not entirely complete, but there is progress."

"I will have to live with it for a while now, but I am very well and people don't have to be worried," she added.

Public figures' health is generally regarded as a private matter in Germany and the country's privacy laws are very strict on that type of information. It is not publicly known if Merkel has any health problems.

The chancellor has a reputation for stamina garnered in years of late-night domestic and European negotiating marathons. She has rarely had to cut back her work schedule significantly, though she did so for a few weeks in 2014 when she cracked her pelvis while cross-country skiing in Switzerland during a winter vacation.

Merkel demurred when asked at Wednesday's news conference whether, given recent concern about her health, she should now take a more head-on approach to the issue.

"My comments on this are done today, and I think my statement that I am fine can find acceptance," she said. "I said that I have to process this event and that I am in this process, and I think that just as it came, it will go away one day."

"I am very firmly convinced that I am entirely capable of performing," she added.

A spokeswoman for Merkel, Ulrike Demmer, declined to comment on whether there had been any other shaking episodes beyond the three publicly known ones.

Merkel said last year that she won't seek a fifth term as chancellor and won't seek any other political job after her current term ends in 2021.

She gave up the leadership of her center-right party after a pair of poor state election performances that followed a rocky start to her fourth-term government. She has shown no sign since of wanting to give up the chancellorship before her term is up.