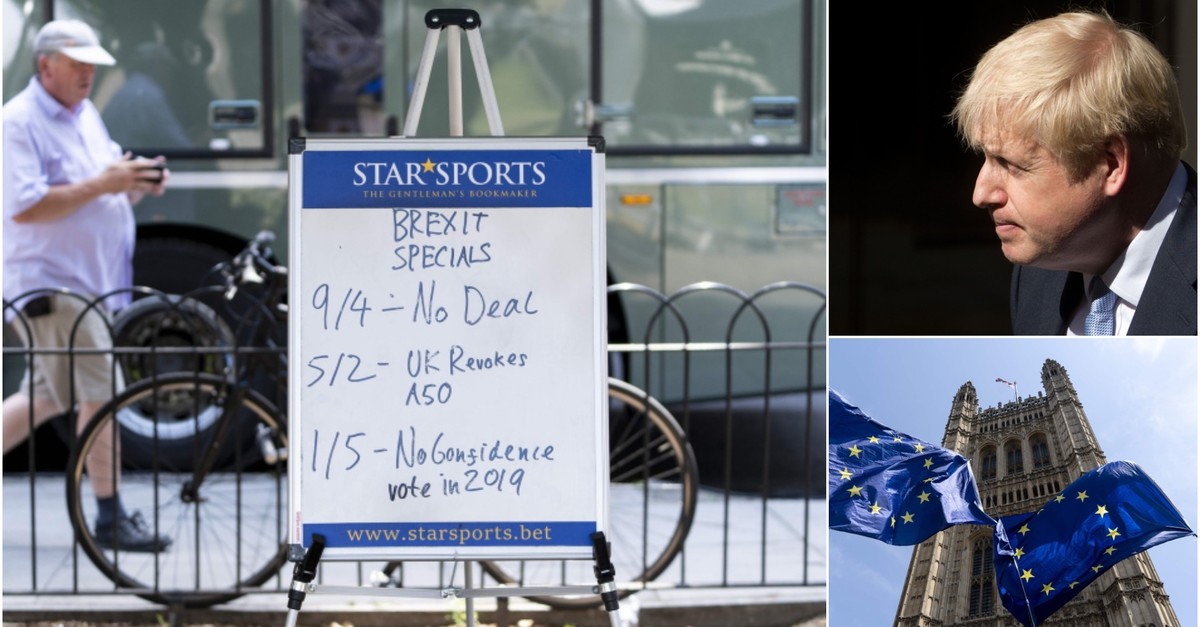 A man walks past a placard proclaiming odds on Brexit on the day of Britain's newly elected prime minister Boris Johnson's (T-R) debut in the House of Commons, outside the Houses of Parliament (B-R) in central London on July 25, 2019. (AFP Photos)
by French Press Agency - AFP
Jul 26, 2019 2:10 pm

After Brussels rejected British Prime Minister Boris Johnson's request to rewrite the Brexit deal, here are the possible scenarios as the clock ticks down to the departure deadline of October 31:

Brexit with a deal

Johnson has vowed to renegotiate the deal that predecessor Theresa May deal struck with the EU but was unable to get lawmakers to pass. He says he will withhold Britain's divorce payments as a bargaining chip to try to get rid of the agreement's so-called backstop clause.

The clause is designed to prevent a hard border between Ireland and Northern Ireland. But its critics argue that it could end up keeping Britain tied too tightly to the EU, and was the main factor in MPs rejecting the deal three times.

The EU has instead said it is willing to rewrite a non-binding political declaration on future trade relations after Britain has left the EU.

The default legal position if no deal can be reached by October 31 is for Britain to leave the EU without no arrangement for a phased-out exit. But a majority of MPs are opposed to such a course of action because of forecast economic catastrophe.

Johnson has promised that he will leave without a deal anyway, setting him on a collision course with many of his own MPs and threatening his wafer-thin majority.

MPs are running out of time and mechanisms to legislate against a no deal, raising the prospect that Johnson's own MPs could join a vote of no-confidence and collapse the government when parliament returns in September.

Many therefore believe that an early election is imminent. But the timing is the source of much debate.

The minimum duration between a successful vote of no confidence and holding an election is 51 days, according to the official House of Commons library.

This means MPs would have to act in the first week back from recess if they were to usher in a new government before Britain was due to leave without a deal.

Alternatively, Johnson could himself seek to take advantage of a weak opposition and call a vote, hoping to get a mandate for no deal and the subsequent legislation that will need to be passed.

Conservative MPs opposed to a no-deal exit, but who do not want an election that could usher in the leader of the Labour opposition, veteran leftist Jeremy Corbyn, as prime minister still hope they can legislate to prevent it happening when they return in September.

To combat that threat, Johnson has not ruled out suspending parliament. This is known as "proroguing", meaning no legislation can be passed to prevent leaving without a deal.

Although within Johnson's rights, such a move would be highly controversial, dragging Queen Elizabeth II into the fray and likely being subjected to legal challenge.

Johnson could also call another referendum to establish a mandate for leaving without a deal, but the leading Brexit campaigner is opposed to such a vote.

Johnson has promised that Britain will leave on October 31 "do or die". But hardline eurosceptics are yet to be convinced that he will not ask for an extension to the deadline if there has been no breakthrough by then.

MPs could also put pressure on Johnson to scrap the Brexit process altogether by revoking Article 50, the mechanism for Britain's departure from the EU.

Despite a majority of MPs voting to remain in the EU In the 2016 vote, it is not certain that there are enough members who would vote in favor of such a drastic measure, particularly those representing seats that voted to leave.