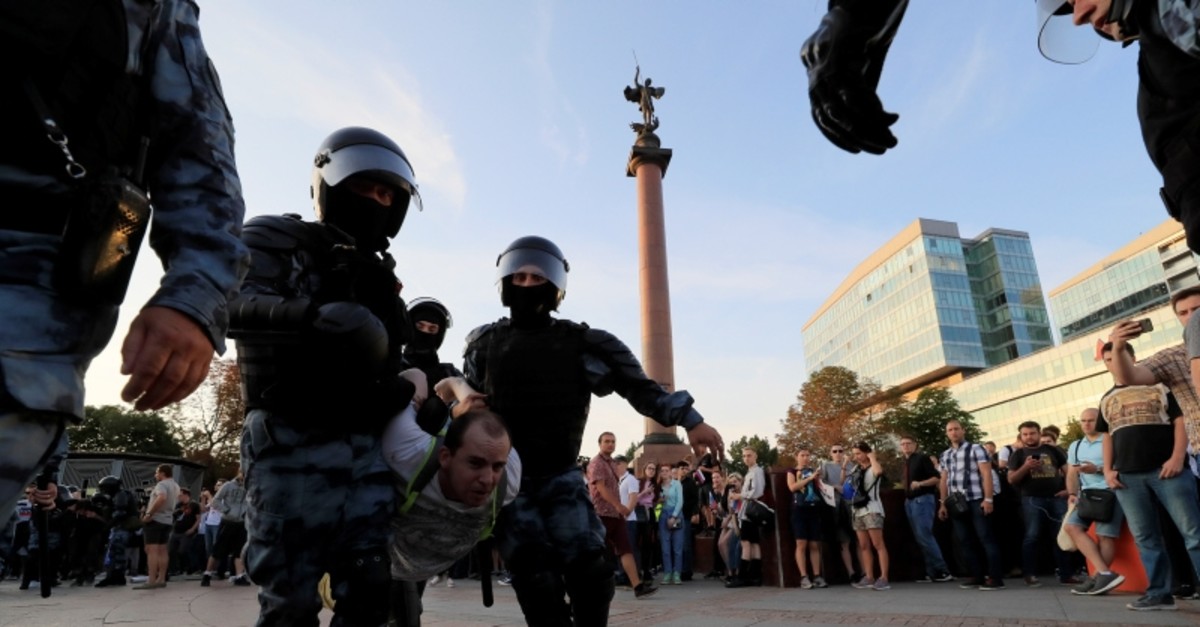 Law enforcement officers detain a participant of a rally calling for opposition candidates to be registered for elections to Moscow City Duma, the capital's regional parliament, in Moscow, Russia July 27, 2019 (Reuters Photo)
by Compiled from Wire Services Jul 27, 2019 10:31 pm

Nearly 1,400 people were detained in a violent police crackdown on an opposition protest in Moscow, a Russian group that monitors police arrests said Sunday, adding that was the largest number of detentions at a rally in the Russian capital this decade.

OVD-Info, which has monitored the arrests since 2011, said the number of the detentions it logged for Saturday's protest reached 1,373 by early Sunday.

It said this was the highest number since mass demonstrations in 2012, when tens of thousands protested President Vladimir Putin's return to the Kremlin after four years as prime minister.

The overwhelming majority of people were soon released but 150 remain in custody, OVD-Info and a lawyers' association providing legal aid to the detainees said Sunday.

Russian police violently dispersed thousands of people who thronged the streets of Moscow on Saturday to protest election authorities for disqualifying independent candidates from the Sept. 8 vote for the Moscow city council.

Several protesters reported broken limbs and head injuries. Police justified their response by saying the rally was not sanctioned by authorities.

Along with the arrests of the mostly young demonstrators, several opposition activists who wanted to run for the Moscow City Duma were arrested throughout the city before the protest. They were released later in the day only to be re-arrested again in the evening.

Police eventually cordoned off the City Hall and dispersed protesters from the area, but thousands of demonstrators reassembled in several different locations nearby where new arrests began. Russian police beat some of them to the ground with wide truncheon swings while other demonstrators tried to push police away.

Police said the protesters numbered about 3,500 people but aerial footage from several locations where people were rallying simultaneously suggests at least 8,000 protesters.

The U.S. Embassy in Moscow on Sunday decried the violent crackdown as "use of disproportionate police force."

The Russian presidential human rights council said Sunday it was concerned about the police brutality.

Opposition leader Alexei Navalny, who was sentenced Wednesday to 30 days in jail for calling Saturday's unsanctioned protest, was hospitalized Sunday with a severe allergy attack, his spokeswoman said.

Kira Yarmysh said Sunday that Navalny, who did not have any allergies beforehand, was taken from the Moscow detention facility to a hospital in the morning, arriving with severe facial swelling and red rashes on his skin. He is considered the most well-known opposition figure in Russia.

Putin made sure to be away from Moscow this weekend. On Sunday, he led Russia's first major naval parade in years, going aboard one of the vessels in the Navy Day parade in St. Petersburg on the Gulf of Finland. The parade included 43 ships and submarines and 4,000 troops.

A week before, 22,000 took to the streets in a sanctioned protest, calling on authorities to reverse their decision ahead of the September city council vote.

After that demonstration, investigators raided the homes and headquarters of a number of disqualified candidates.

Several would-be candidates were detained before or during the protest on Saturday. Navalny's team has called for another rally next weekend.

"The authorities have lost all sense of reason. They are behaving in a way that is almost sadistic," Ilya Yashin, a barred opposition candidate, wrote on Twitter late Saturday.

Elections to Moscow's 45-seat legislative body, currently controlled by the pro-Kremlin United Russia party, are due to be held in six weeks.

While pro-Kremlin candidates enjoy the support of the state, independent candidates say they have been made to jump through countless hoops in order to get on the ballot for the city polls.

Following pickets last week, including outside the local election commission building, investigators said they were launching a criminal probe into obstructing the work of election officials.

If found guilty, organizers risk up to five years in prison.

Local polls are a rare opportunity for dissenting voices to participate in political life as anti-Kremlin parties have been squeezed out of parliament over Putin's two decades in power.