The future is not what it used to be 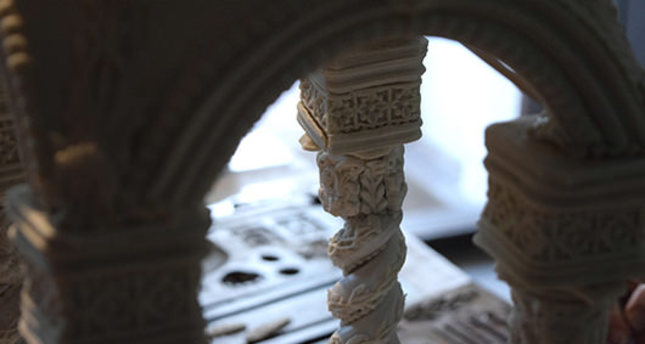 The second edition of İKSV’s Istanbul Design Biennial will be held from Nov. 1 to Dec. 14 at Galata Greek Primary School

To create an international platform for the design and architectural fields, the second edition of the Istanbul Design Biennial, organized by the Istanbul Foundation for Culture and Arts (İKSV), will be held from Nov. 1 to Dec. 14. The free event, which is open to all creative industries, is curated by Zoe Ryan with the title "The Future is Not What it Used to Be." The biennial asks designers the question, "What is the future now?" through more than 50 design projects. Sponsored by the Arçelik, Doğuş Group and Bilgili Holding, the ENKA Foundation and VitrA, many institutions have contributed to the event.

Preparations kicked off Sept. 15 at the Galata Greek Primary School with its outstanding neo-classical architecture. Spreading across 2,300 square meters, the exhibition area is getting ready to showcase innovative designs and products that can be seen in daily life.

The exhibition gathers different fields from technology, graphic and product design, cinema and urban design to fashion. As the biennial's news release states, the event invites designers to rethink the manifesto that is "produced as texts that lie somewhere between declaration and desire" and how the manifesto can be "reinvented as an action, a service, a provocation or an object."

Among the biennial participants, Studio Formafantasma, an Amsterdam-based duo of Italians Andrea Trimarchi and Simone Farresin, will show "Open Manifesto," which displays innovative objects based on a study of alternative materials. Designer Moises Hernandez's "Diario" (Diary) presents traditional Mexican objects that can be seen as a social, cultural and design critique. Bless Design Studio is presenting the "N°41 Workout Computer" that turns computers into a personal exercise machine. Anthony Dunne and Fiona Raby's "United Micro Kingdoms: A Design Fiction" introduces a parallel world surrounded with alternative values, beliefs and priorities.

In addition to these, İyiofis displays the architectural invention "In Use of Shores: A Micro-Manifesto for Micro-Urbanisms." Designer Mansour Ouranah deals with the increasing world population and food shortage with a kitchen tool for harvesting grasshoppers called "LEPSIS: The Art of Raising Grasshoppers." Jessica Charlesworth and Tim Parsons explore the idea of survival with "bug-out-bags" in their project "Tools of New Survivalism."

Alongside the exhibition, the Galata Greek Primary School will host daily side events for six weeks. On Tuesdays, the Kontraakt team is broadcasting a special design program. There will be panels and discussions on Wednesdays followed by film sessions on Thursdays and an academic program on Fridays.

The design of the exhibition area and catalogue was prepared by Project Projects and SUPERFOOL, while Alametifarika is carrying out the promotion campaign. This year's biennial will include new design walks that offer the opportunity to visit design-focused offices, stores, workshops, manufacturers and architectural structures in different regions of Istanbul with exclusive guided tours. Design walks will begin this month in 15 different places on the Anatolian and Europe sides of Istanbul. Detailed information is available on the official website www.tasarimbienali.iksv.org

The biennial's academic program invites university students to propose different ideas on the event's theme throughout the year. More than 30 universities in Istanbul, Ankara, İzmir, Turkish Cyprus, Europe and the U.S. will participate with 70 projects, including workshops, exhibitions, panels and seminars. The academic program's exhibitions will be on display at participating universities and Antrepo no.7. In collaboration with Design Research Contribution Kadıköy (TAK), the 72 Hour Urban Action team will carry out the project "Kadıköy'den Bul Kadıköy'de Buluştur" (Find in Kadıköy and Assemble in Kadıköy). As part of the biennial, the project will design urban furniture using recycled materials collected from different points in Kadıköy.