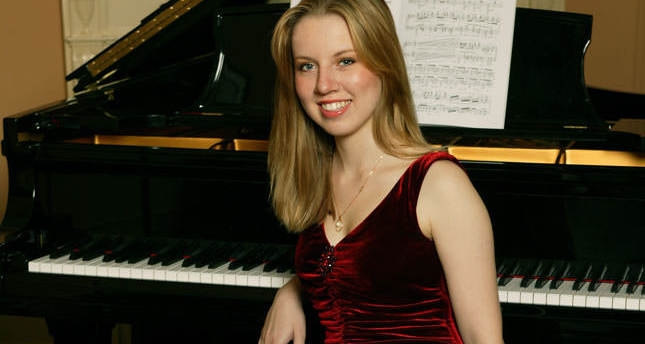 by daily sabah Nov 04, 2014 12:00 am
Known for her flawless piano technique, the renowned pianist Natasha Paremski will perform at The Seed on Nov. 8 within the scope of Istanbul Recitals. Paremski, a Russian-American pianist, is a source of inspiration with her perfect technique, eye-catching and energetic performance and she continues to become internationally renown and grow her fan base thanks to her exceptional musical talent. Awards that she won throughout her career include The New York Pinault Musical Society "International Piano Competition" in 1999, "The Gilmore Young Artist Award" in 2006, the "Prix Montblanc" in 2007, the Classical Recording Foundation's "Young Artist of the Year" in 2010 and the Bronislaw Kaper Grand Prize sponsored by the Los Angeles Philharmonic in 2012. Paremski, who gave her first professional concert at the age of nine with El Camino Youth Symphony in California, began playing piano when she was four-years-old. At the age of 15, she accompanied the Los Angeles Philharmonic on stage. She has performed at some of the most prestigious performance halls in world such as Carnegie Hall in New York, Wigmore Hall and Cadogan Hall in London and the Louvre Auditorium in Paris. So far, the pianist has performed with the Virginia Symphony, Alabama Symphony, Berkeley Symphony, Toronto Symphony, San Francisco Symphony, Los Angeles Philharmonic, Baltimore Symphony, Houston Symphony, Dallas Symphony, Royal Scottish National Orchestra, Taiwan National Symphony, Colorado Symphony, Nashville Symphony, Bournemouth Symphony and Royal Philharmonic.

Where: Sakıp Sabancı Museum - The Seed