Puccini’s ‘La Boheme’ to be performed in Mersin 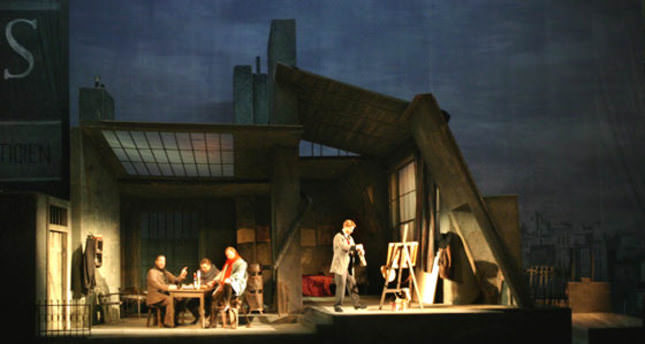 by daily sabah
Nov 21, 2014 12:00 am
The Mersin State Opera and Ballet (MDOB) will perform Italian composer Giacomo Puccini's opera "La Boheme," conducted by Vladimir Lungu, on Nov. 25 at the Mersin Cultural Center. Based on French novelist Henri Murger's story collection, the opera is directed by Kenan Korbek. İsmail Dede designed the opera's set design while the costumes are designed by Çimen Somuncuğlu. Oleg Costantinov is preparing the opera's choir and Reyhan Bezdüz will direct the children's choir. The cast includes Bengi İspir Özdülger, Erdem Erdoğan, Funda Hayfavi, İnanç Makinel, Hasan Berk, Andrei Yevtushenko, Ufuk Kasar, Özkan Çavdaroğlu, Baran Taner, Levent Yetkin and Erdem Özdemir. The four-act opera was first performed in Torino, Italy in 1896 and was directed by Arturo Toscanini. The story centers on the poet Rodolfo and his three friends who live their poor life in their Paris-based attic. Rodolfo's life changes when he falls in love with his young and beautiful neighbor, Mimi. However, the young lovers suffer from illness and poverty and Rodolfo thinks Mimi's illness will get worse as long as they live in poverty. He also does not have enough money to help cure her. He tries to stay away from Mimi by describing her as a wanton, but Mimi cannot live away from him and returns where they meet first - Rodolfo's house. As the young woman's disease worsens, Rodolfo is more important than anything else in her life.