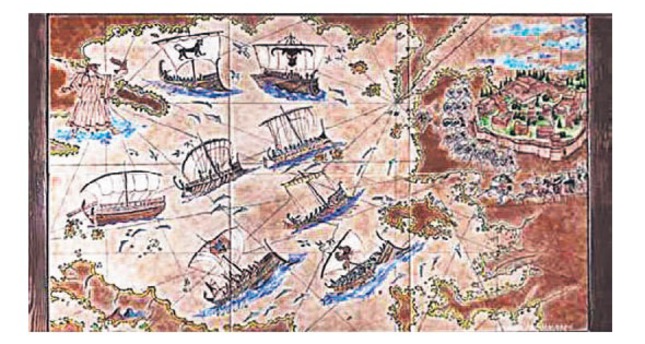 by AA
Nov 24, 2014 12:00 am
Marking the 100th anniversary of the Gallipoli campaign, Turkish artists Faris Öncel and Cumhur Koraltürk depict the legend of Troy in their works of art at a new exhibition.

Öncel reflects the history of Hector of Troy, who is recognized as the greatest fighter in the Trojan War, on traditional İznik ceramic vases and paintings. The "Çanakkale Destanının İlk Halkası - Troyalı Hektor" exhibition (The First Ring of the Legend of Gallipoli: Hector of Troy) presents oil paintings by Koraltürk, miniature ships and animations featuring the love affair between Helen of Troy and the Trojan Prince Paris and the fight between Greek hero Achilles and Hector.

Known as one of the most important events in ancient Greek mythology, the Trojan War is widely mentioned in ancient Hellenistic art and literature, especially in Homer's "Iliad" and "Odyssey."

Curated by Ali Rıza İşipek, who previously organized the exhibition of Ottoman geographer and cartographer Piri Reis, the ongoing exhibition can be visited until the end of February 2015 at Istanbul's Rahmi M. Koç Museum.