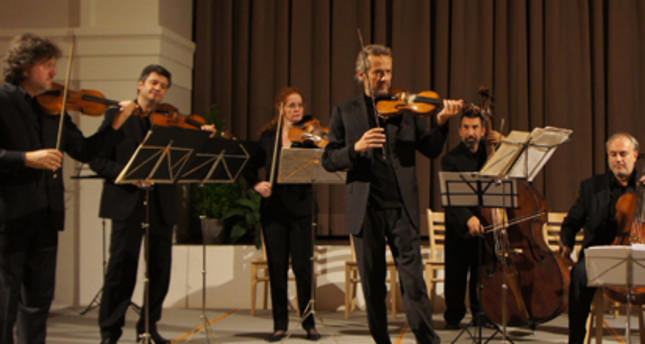 by Daily Sabah Nov 28, 2014 12:00 am
I Sonatori, one of the most famous period music ensembles in Italy, has been performing modest, pure and delicate music for the last 25 years. The musical group has collaborated with renowned musicians and received critical acclaim with famous mezzo-soprano Cecilia Bartoli, with whom they made a video and CD at the Teatro Olimpico in Vicenza. I Sonatori's last recording, "Flauto veneziano," won the ECHO Klassik award in 2013. The ensemble's repertoire ranges from the classical pieces of the 16th century to contemporary music. The internationally reputable ensemble will be accompanied by successful violinist Giuliano Carmignola, who is known for his performances with late Italian conductor Claudio Abbado. Carmignola is also recognized for his contemporary and baroque interpretations and recordings awarded Diapason d'Or and Choc du Monde. I Sonatori will perform a repertoire featuring Vivaldi concertos and play ancient music on period instruments.