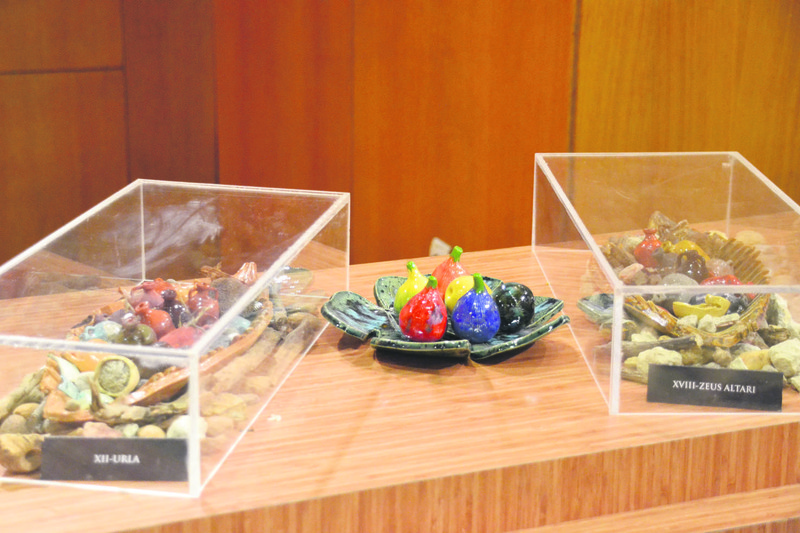 by Daily Sabah Mar 09, 2016 12:00 am
The exhibition, "Istanbul's Hidden Ships," was organized with inspiration from the sunken shipwrecks unearthed during the Marmaray excavations, and will displayed at Cemal Reşit Rey Concert Hall until March 13. "This archeological exhibition has 23 pieces. A 50cm x 100cm piece depicts a harbor, and there are also 11 big ships scaled between 47cm and 50cm and small ones scaled from 37cm to 47cm," artist Necati Badem said. Recalling that the Harbor of Theodosius was unearthed during the Marmaray excavations in 2001, he said: "Shipwrecks from the fifth and 11th centuries were found. There are nearly 37 similar ships and we own the biggest shipwreck collection in the world. I took 12 to 18 wrecks as examples since not all of them were in good shape. The exhibition took nearly two-and-a-half years. I made replicas of 22 shipwrecks, over 120 color trials, and over 1,000 broken and whole ceramics. None of the pieces are alike. Each of them was treated one-by-one." Badem said. Starting his career as a painting teacher, Badem spoke about his interest in ceramics, saying: "I have been working with ceramics for five or six years. I am interested in many fields of art as well as ceramics since it includes color, ground color, sculpture and an idea. There lies a project inside. These are the elements that led me to the art of ceramics. That's why I will lead my life with ceramics from now on."

When: Until March 13
RELATED TOPICS