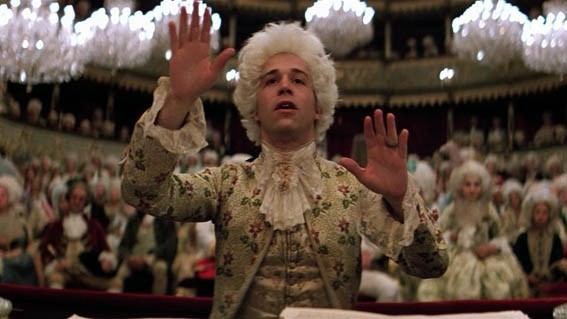 A scene from u201cAmadeusu201d
by Daily Sabah Feb 06, 2017 12:00 am
If you are ready for a brand new audience experience, then book your tickets for Feb. 24 and 25 for the screening of Milos Forman's cult 1984 film "Amadeus." The film screening will be accompanied by a giant orchestra and choir and the audience will experience the amazing soundtrack of this Oscar wining production firsthand.

Czech director Forman, who is the master behind the camera for "Man on the Moon," "One Flew Over the Cuckoo's Nest" and "Goya's Ghosts," adapted Peter Shaffer's 1979 stage play onto the screen and brought a new perspective to the life of Wolfgang Amadeus Mozart. Apart from its striking plot, imagery and portrayal, the film is imprinted on the viewers' mind with its soundtrack, featuring Mozart's original compositions and John Strauss' genius. On Feb. 24-25, "Live in Concert: Amadeus" will honor Wolfgang Amadeus Mozart through his music, the music that was composed for him as well as for the film shedding light on his life.