A glimpse into ‘the slow arrow of beauty' 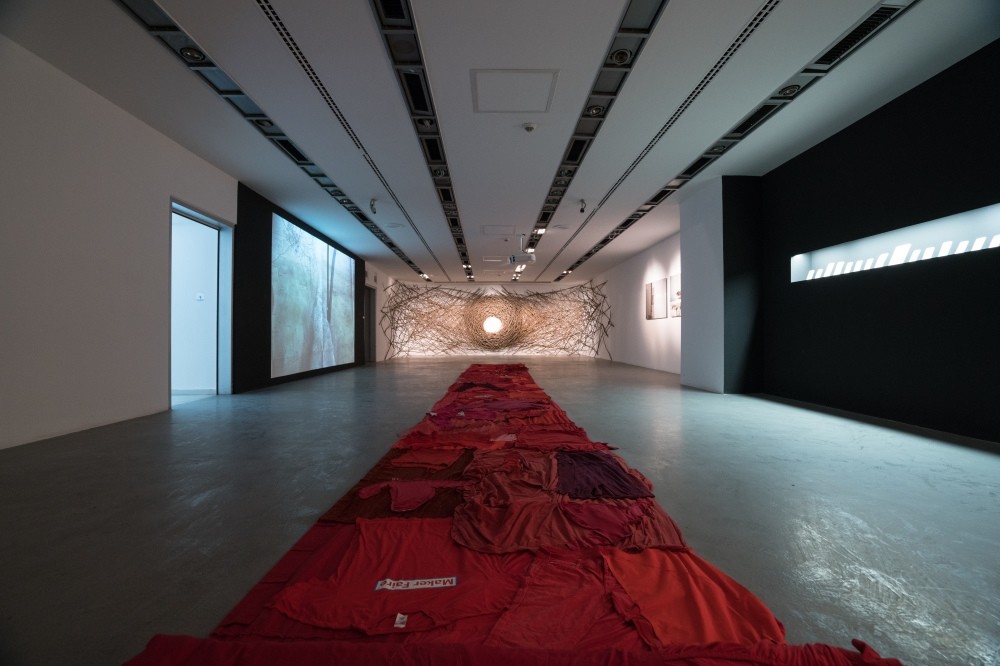 The 5-square-meter room is pitch black. Once you step inside, the only thing that illuminates the interior is the UV LED light, which resembles a Star Wars light saber, provided at the entrance. It is a creepy feeling to be so suddenly and totally isolated from the outside world, equipped only with a dim blue light. The artist has left it to the viewer's imagination to guess what the room may have in store. Slowly, sentences start appearing on the wall: Written with invisible ink, they ask the viewer to come closer and move around them. Only then does one take a proper glimpse at Önder Bekel's "Rediscovery of Information," one of the works exhibited at this year's Akbank Contemporary Artists Prize Exhibition.

"There is a profound sense of discovery in this year's selection," Hasan Bülent Kahraman, the show's curator, said in an interview last week. "We go back to the age of cave paintings and then take a look at tablets [...] these are tools that had been used to inscribe and communicate information for so long. There is certain fluidity between ages, languages and cultures in this exhibition."

Berkay Tuncay's "Study for Kanye's Tweets No: 2," one of the most Instagrammed works of the show, features 15 tablets that look exactly like a set of smartphones but for their clay material and the hieroglyphs placed on their surface. "I am an artist and as an artist I will express how I feel with no censorship," reads one tablet, provided that you can decode its cryptic language. This is a quote from a tweet by the rapper Kanye West, who created controversy with his lyrics about another singer, Taylor Swift, and was forced to explain the matter on social media. So, is this the heritage we are leaving to future generations? The great Kanye and Swift controversy and how it had been settled. Will our predecessors look back at the 21st century and understand our age in light of such remnants? This is the stark prediction of Tuncay's excellent work.

The Contemporary Artists Prize Exhibition was set up by Leyla Belli in 1983. "There is no other contemporary art event that has sustained for so long," Kahraman said. "I consider this to be a big phenomenon in a country where institutional structures are so easily and rapidly dissolved."

This is the 35th edition of the prize exhibition. The selection here is made by a jury who then choose a curator assigned with designing the show. Some 1,500 works applied to this year's prize and the jury selected 15.

"The jury was looking for works that powerfully expressed their subject matters," Kahraman said. "The works were expected to have a suitable form and artistic consistency. After the selection was made, the jury chose me as this year's curator. And I developed the theme of this year's show."

German philosopher Friedrich Nietzsche's phrase, "the slow arrow of beauty" became Kahraman's starting point for the exhibition. "I have been focusing on slowness and beauty in my curatorial work for the past few years," he explained. "This show explores what slowness means in a world that is abnormally fast."

"Communication, the use of new media, the dissemination of images [...] everything is happening at lightning speed," Kahraman writes in the exhibition catalogue. "The question is, will this speed, this 'delirium,' prevent the creation of beauty and our ability to experience beauty. If the beauty in question is one that does not enwrap us, does not infiltrate us, does not seize us, would the world be stripped of, dissociated from beauty?"

Leman Sevda Darıcıoğlu's installation ".behind" is among the most charming works on display here. In it, the artist has placed a wooden writing desk and chair in a gallery covered by plaster sculptures of doves. Viewers are invited to walk among the birds some of which were torn to pieces when I visited.

"Beauty and autonomy define Turkey's contemporary art," Kahraman said. "Contemporary artists have long produced politically autonomous works in order to explore what beauty means in this country. The raison d'etre of contemporary art has always been its political content. Contemporary art is political in the widest sense of the word. Sadly people think of beauty and aesthetics as apolitical things nowadays. The socialist realism of the 1970s is largely responsible for this misleading separation. We have been taught that the beautiful work does not serve a political purpose. That is an extremely problematic notion. In fact, beauty and aesthetics provide us with spaces for resistance. Throughout human history, people have resisted power by creating beauty."
Last Update: Apr 15, 2017 1:00 am
RELATED TOPICS