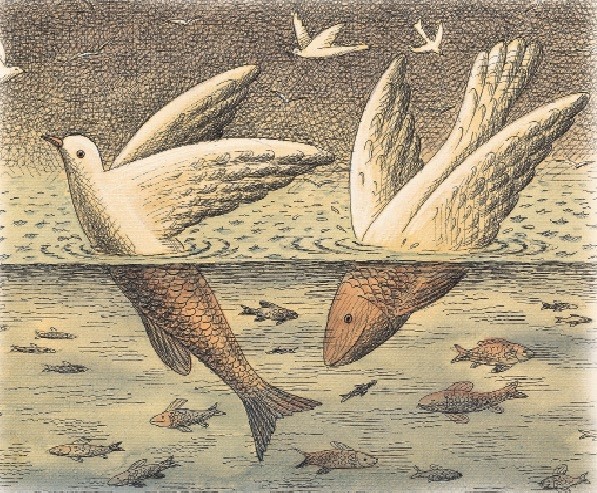 The work of successful international graphic artist Gürbüz Doğan Ekşioğlu, is currently on display at Gallery Aydın, in a series of works featuring cats, birds, fish, books and female figures, created using a mixture of acrylic and water paints on paper. The exhibition opened its doors to visitors on May 3 and shows about 30 50x70-centimeter artworks by Ekşioğlu. The exhibition is open until May 30. Throughout his education, Ekşioğlu realized that classes other than art did not interest him.

Since then, he has devoted his life to art, to share his feelings through his work. Born in the province of Ordu, the artist studied in the graphics department of the State Practical Fine Arts Vocational School. With an interest in the art of caricature since 1977, Ekşioğlu has won 64 awards, including 23 international prizes. Along with international and national mixed exhibitions, he has had 29 solo exhibitions, one of which was in New York.

His illustrations and caricatures have featured in the New Yorker magazine three times, once in Forbes and other magazines including the Atlantic Monthly and the New York Times. He won the Sedat Simavi Visual Arts Prize in 1998 and improved his skills by training in graphic design. Continuing his work in this area, Ekşioğlu has a studio in Moda, Istanbul and is also an associate professor at the Faculty of Fine Arts of Yeditepe University.