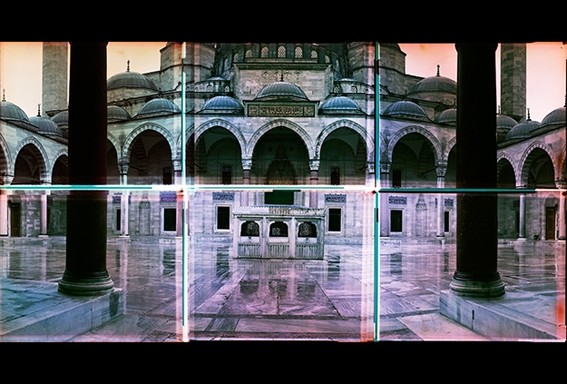 Curated by Necmi Sönmez, "Ola Kolehmainen: Sinan Project" is open to its visitors on the fourth floor in Borusan Contemporary. Sinan Project consists of works of Ola Kolehmainen, who is known for his intangible works and regarded as one of the most important representatives of contemporary art of photography. It focuses on the masterpieces Byzantine and Ottoman architecture; while at the same time, addressing intercultural dialogue in a contemporary way thanks to its dynamics.

Kolehmainen became well-known within the Helsinki School of Photography movement. His works were included in Borusan Contemporary Art Collection in 2010 and exhibited in Haunted Maison in 2010. Afterwards, thanks to Borusan Contemporary's special order, he started working on Sinan the Architect's pieces and produced dozens of large-sized colored photographs between 2012 and 2014 from the perspective of Byzantine architecture that had impacts on Sinan's works. All of them are printed with the diasec technique in Dusseldorf, making a creative and aesthetic interpretation of the context of Sinan the Architect's pieces from a unique and unnoticed perspective. Sinan Project, despite with a focus on masterpieces of Byzantine and Ottoman architecture, addresses the intercultural dialogue in a contemporary way thanks to its dynamics.

The artist underlines interdisciplinary interaction with his unique interpretation of the impressive works, where the elements of color and form are highlighted. Kolehmainen continues his works in Berlin and concentrates on the transformation of the forms in the Sinan Project since this collection shows the close relations between the Byzantine and Ottoman architecture from an aesthetic perspective rather than from a functional perspective, and stresses the use of lights especially.

The artist, who has done research on the effects of sunlight for a long time in the places where he takes photos, focuses on dynamic details in his works showing how the lights transform architectures' mass forms. He reveals humanist values in the gist of Sinan's architecture.