Change the color of your dress with a single touch 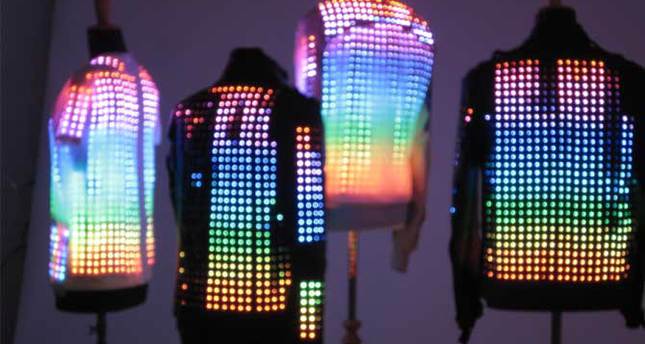 by daily sabah
Nov 07, 2014 12:00 am
British fashion house CuteCircuit is integrating smart technology into their dresses and other garments to enable people to change the color and pattern of a dress with the touch of a finger. The fashion house is already known for its designs decorated with LED lights.

Although it may sound like something out of a science fiction movie, wearable technology's domination over the fashion industry is growing every day. Individuals will no longer have to suffer the embarrassment of being caught in the same dress as someone else or give up on buying a dress just because they do not like the color or the fabric. Thanks to wearable technology all these things will be possible in the near future.

CuteCircuit, which is famous for their interactive and LED-lit T-shirts, was among the most talked about shows from New York Fashion Week in 2011. The fashion house has a client list filled with well-known names of show business. Katy Perry, the American singer, says costumes with LED lights are perfect for the stage and that the digital dress perfectly reflects her mood. The fashion house also designed a "Twitter dress," a dress that displays the most liked tweets, for singer Nicole Scherzinger.

Thanks to a new mobile application invented through their collaboration, the color and the pattern of a dress can be changed within seconds. Furthermore, the fashion house guarantees that the dress can be worn for 10 years.

Aswell as the dress, CuteCircuit announced that they will also design a skirt that will help women when they are indecisive about what to wear. But every rose has its thorn, and in this case, the dress has to be charged since its battery lasts for only two days. The fashion house is working on integrating longer-life batteries, as they have been criticized for their battery problems.

The dress, which can be washed after removing the LED lights, has not been introduced to the market yet. It is predicted that the glittering dress that can be integrated with smart phones will sell for 5,000 euros.