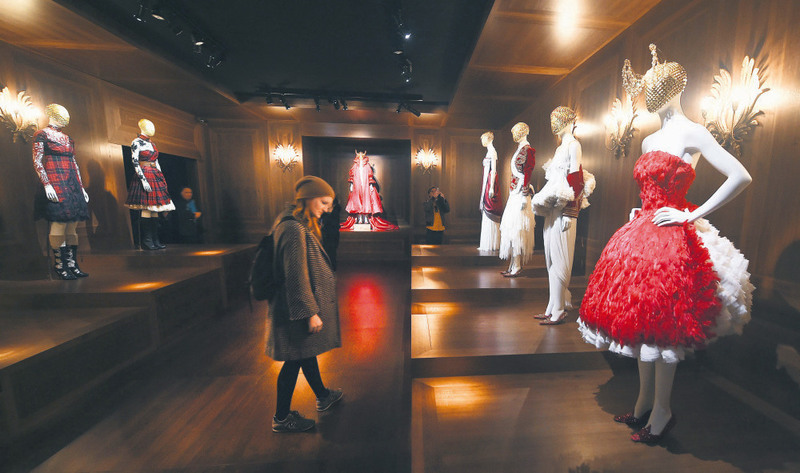 The city's Victoria and Albert Museum on Thursday unveiled its much-anticipated tribute to the late British fashion designer, who dazzled the industry with his creative talent and provocative designs before committing suicide in 2010.

The V&A described the new show as a "homecoming" for the designer, who was born and trained in London and often took inspiration from the British capital. The museum was also a fitting host for the retrospective: As a young fashion student, McQueen studied its archives and once said it was "the sort of place ı'd like to be shut in overnight." The exhibition is an expanded version of the 2011 show at New York's Metropolitan Museum of Art, which drew hundreds of thousands and became one of the most popular in the museum's history. The London show includes a new section focusing on McQueen's early London collections.

The highlight is the "Cabinet of Curiosities," a darkened room lined floor-to-ceiling with some of his most dramatic designs: The monstrous, lobster claw "armadillo shoe" worn by Lady Gaga, a metal corset with a distorted animal-like spine, and many of his terrifying, tribal-inspired spiky headdresses.

In the middle of the room stands a rotating mannequin in a spray-painted dress, replicating the finale of a 1998 show in which a model revolved around a turntable while robots sprayed her with ink. "We want to bring the sense of theater and spectacle that's associated with his catwalk shows," said researcher Kate Bethune. "He was an incredible storyteller."

Born to a modest background '€' his father was a cab driver '€' McQueen trained as a tailor's apprentice in London's famed Savile Row before formally launching his career. He was celebrated for challenging conventional ideas of beauty, and often drew on macabre and violent themes for his runway displays, from Joan of Arc to English battles to mental asylums.

The exhibition gives visitors a chance to see his strange and beautiful creations up close, including clothes made entirely out of razor clam shells, hair, wood and glass. Bird feathers featured heavily '€' Bethune said he used to be a birdwatcher as a child.

McQueen fascinates people who normally take little interest in fashion, she added. The V&A said Thursday it has already sold more than 70,000 tickets.

"He made everything so real, he was so controversial and always had a strong point of view," she said. "His imagination was completely limitless. ı do believe he was an artist whose medium was fashion."