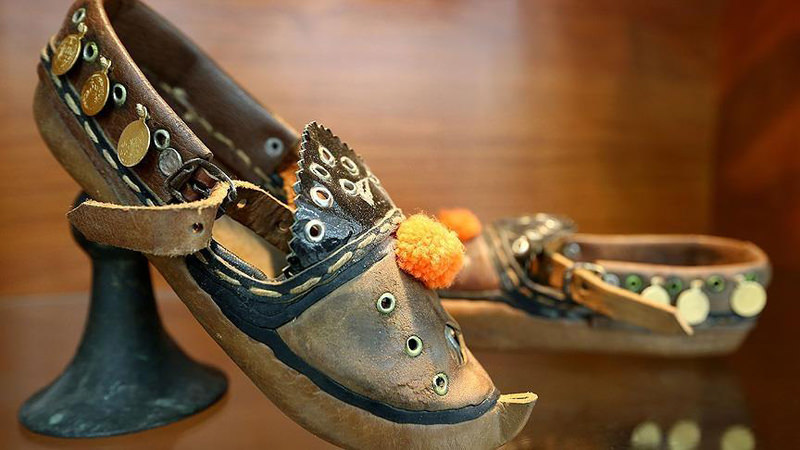 Established in İzmir by the Chamber of Shoe-Makers, the Shoe Museum takes visitors on a walk through the history of footwear. Old-fashioned shoes draw the most attention from museum visitors. Ottoman-era shoes, in particular, amaze today's shoe designers with their craftsmanship, durability and unique style. Yalçın Ata, the president of the Chamber of Shoe-Makers, said the museum displays 17 artifacts, including shoes used in the Ottoman period, bendy boots worn by soldiers, rawhide sandals, colored cotton kerchiefs, slippers as well as tools that were used to manufacture footwear. He said the Shoe Museum in İzmir is the only museum in Turkey that focuses on footwear, and they are working on a joint project with the Bornova District Governorate to promote the museum. He said people do not know much about the footwear industry, but they have a chance to take a closer look via a trip to the museum.

The museum displays 500-year-old shoes and people can compare the footwear of the past with the footwear of today. "The durability of a pair of shoes was the most important thing back in the day. To increase durability, shoemakers used natural leather. Today, people mostly value the aesthetic and design. Consumers demand fashionable shoes and dismiss durability," said Ata. Buildings in the Kadifekale region, which were demolished as part of an urban transformation project, sheltered hundreds of old shoes that had been untouched for centuries. The shoes unearthed during this project are also featured at the museum. Ata said the shoes have been well preserved, and people are astonished to see that the shoes still look good after all those years. "These shoes are the most precious pieces in our museum. Shoemakers of the period placed great importance on durability. For instance, seamless shoes continue to preserve their initial form. It is incredible that people produced these shoes with the technology of that time," he continued.

Ata said that shoes worn by brides in the past are among those on display at the museum. "The embroidery featured on the old shoes is practiced today with the help of machines," he added. Various model rawhide sandals of the Ottoman-era are also showcased in the museum. Back in the Ottoman period, small girls wore rawhide sandals that are still popular today; however, manufacturing them by hand no longer happens, said Ata. "Our footwear designers are inspired by the Ottoman designs and draw models similar to them. We have various shoe models that have come into fashion this way," he concluded.
Last Update: Oct 19, 2015 1:02 am