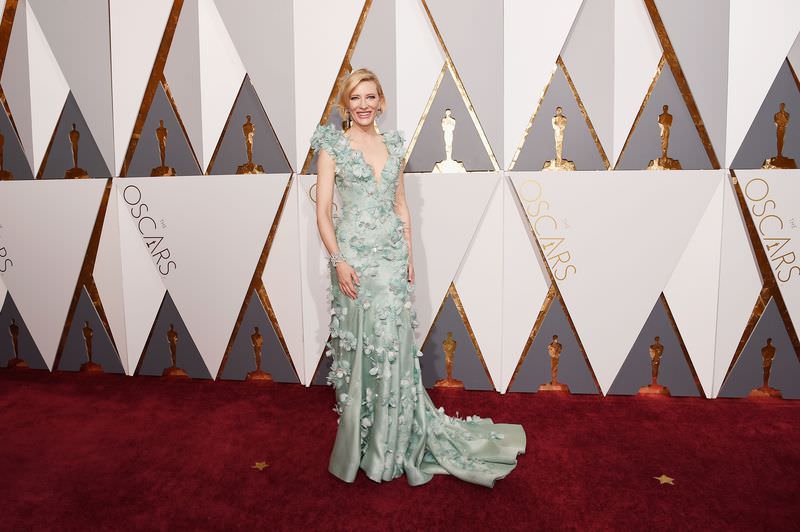 by Mar 01, 2016 12:00 am
The world's most-watched stretch of red carpet seized the spotlight in Hollywood on Sunday as stars in luxurious gowns, glittering sequins and daring necklines strutted and twirled on their way into the Academy Awards.

Although dresses in jewel tones and a profusion of skin were this year's signature trends, stars took red carpet risks, whether Charlize Theron in a vibrant red plunging Dior or Cate Blanchett in an explosion of flowers.

Nominated for best actress in "Carol," Blanchett drew both raves and raised eyebrows with a sea-foam Armani Prive gown adorned with a profusion of hand-sewn flowers and feathers. "You have to love people who are taking risks," said Andrea Lavinthal, People magazine's style and beauty director. "Otherwise you'd see a lot more black dresses." A pale yellow Louis Vuitton gown adorned with silver paillettes was one of the first looks to shimmer down the 500 foot-long stretch of carpet. It was worn by Alicia Vikander, nominated for best supporting actress in "The Danish Girl."

"Just being here feels so surreal," said the Swedish actress sporting a high ponytail. "I have butterflies in my tummy."

"Modern Family" star Sofia Vergara brought va-va-voom to the red carpet in a plunging Marchesa dress in midnight blue, while "Star Wars'" Daisy Ridley sparkled in silver sequins in a V-neck Chanel. In a similarly skin-baring dress, best actress nominee for "Brooklyn" Saoirse Ronan channeled her inner mermaid with a sparkling emerald Calvin Klein dress with an open back and dramatic V-neck. Why the green? "I'm very proud to be Irish," said the nominee, who also wore green when first nominated for an Oscar for "Atonement" in 2008.

Black was the never-fail color choice of presenter Julianne Moore, who wore a strappy black Chanel with a corset-like bodice and tulle underskirt, while Jennifer Garner chose Versace in a one-shoulder gown with an elegant panel of satin descending from the hip. A royal blue silk Gucci with cascading ruffles was the choice of Brie Larson, the heavy favorite to win in the best actress category for "Room," while Naomi Watts opted for iridescent blue sequins by Armani Prive."This has been my dream since I was seven years old," Larson enthused before making her way down the phalanx of photographers.