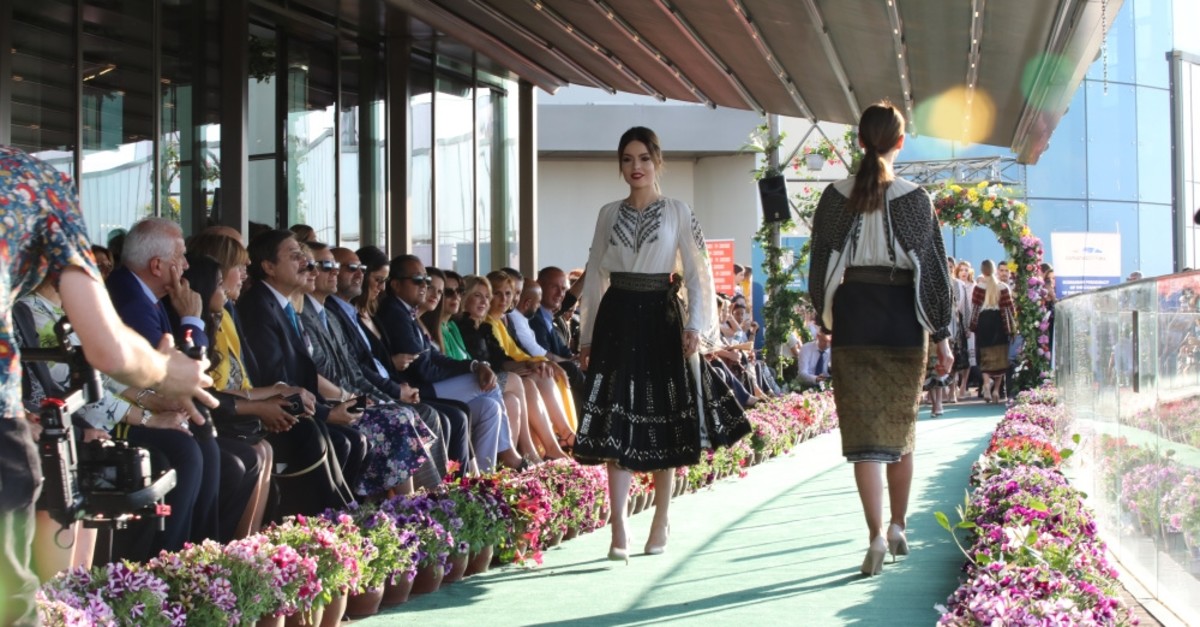 Traditional Romanian clothes displayed at a charity event for Syrian children.
by daily sabah Jun 15, 2019 12:19 am

The Romanian Embassy in Ankara celebrated Thursday the universal day of Romanian Blouse with a fashion show and a charity event for the benefit of Syrian refugee children.

During the fashion show called "the Symphony of Flowers," the Romanian brand "Flori de Ie" presented 30 traditional Romanian folk costumes of heritage, as well as a collection of modern clothing inspired by the Romanian culture and traditions especially dedicated to the anniversary of the Romanian Blouse.

The event took place in Ankara's Atakule shopping mall, one of the capital's most iconic buildings, with the participation of Romanian Ambassador Gabriel Şopanda and representatives of the political, diplomatic, academic and business environments, as well as the Romanian community in Ankara. The symbolic building was illuminated in the colors of the Romanian flag and displayed on its screen the line "Celebrating the Romanian Blouse" in English and Turkish.

The "World Mix Band" jazz ensemble, led by the Romanian trumpeter professor Julian Lupu of Ankara Bilkent Orchestra, performed at the event. A day after the fashion show, cultural adviser of the Romanian Embassy and the deputy-chairman of SHOM (Spouses of the Head of Missions in Ankara), Lavinia Ochea, organized Friday a charity event for the children of the Syrian refugees.

During the event, a raffle with traditional Romanian and international products was held. The funds will be donated to the al-Farah Association for Solidarity with Asylum and Migrant Solicitors (ASAM) center for the purchase of clothes and toys for the children of Syrian refugees from the metropolitan area of Ankara.