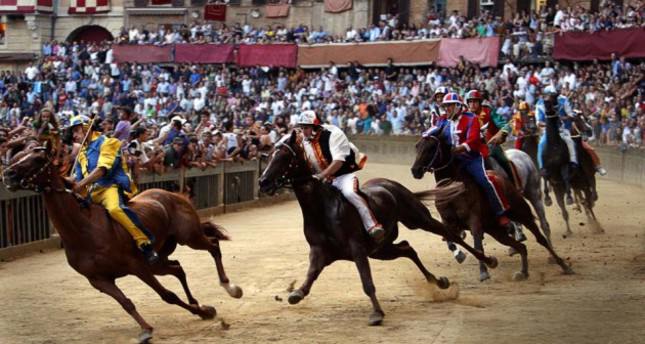 by Miraç Tapan
Nov 11, 2014 12:00 am
You have probably heard about the Italians being passionate about almost everything in their lives, but I can assure you that you have seen nothing until you watch The Palio – a medieval horse race. Held in the honor of the Madonna of Provenzano and the Virgin Mary's Assumption, the race takes place in Siena twice a year on July 2 and Aug. 16. Although Siena's Palio is one of the biggest events in Italy, drawing scores of tourists to the country, it is all about Sienese identity as well by celebrating the festivities as a community. Twice a year, the Sienese loudly – and proudly – celebrate their roots and history along with people who come to their city to admire their culture.

Located on the hills of breathtaking Tuscany, Siena is a place that takes you to the medieval times as soon as you step inside the city walls. Although Siena's population grew in time, the local population showed respect to the city their ancestors built by constructing new buildings outside the city walls to preserve the medieval atmosphere. With just a short bus ride, one can travel through time in Siena. The ancient city, which was declared a World Heritage Site by UNESCO, is reminiscent of an open-air museum with its Duomo (cathedral), Fortezza Medicea (The Medici Fortress) and Piazza del Campo where the Palio takes place.

The Palio came into being when the Grand Duke of Tuscany banned bullfighting in Siena in 1590. The 59 contradas (districts into which the city is divided) decided to organize races in the central square of the town. At first, they tried holding the race using buffalo and donkeys as mounts, but then in 1656, the first modern Palio on horseback turned out to be a success. Today, there are only 17 contradas in Siena and 10 of them race in each event.

The concept of contrada is very important for Sienese identity and the Palio. Contradas are agonistic institutions each of which has their own oratory, coat of arms, title – including those of the nobility – emblems, colors, official representatives, festivities, patron Saints, protectors and borders. From the moment of birth, every citizen of Siena belongs to a contrada and is connected to a community with invisible ties.

Weeks before the race begins, the streets of Siena are filled with flags and lambs in order to determine the contrada borders. At night, each contrada organizes open-air parties for their residents as well as tourists like me – even though I did not consider myself a tourist after spending two months in the city. These parties begin with an open buffet and homemade wine and continue with DJ sets. And a little heads up for anyone considering spending a few days in Siena before the Palio: Do not be alarmed if you see young men fighting with each other without reason since they probably belong to two opposing contradas.

Although the race only lasts a few minutes, the Palio is actually a four-day event. On the first day, each contrada draws lots and is assigned to a horse. After the assignments, contradas place their horses in secured areas because some horses have been reportedly assassinated by the enemy contradas before the race in the past.

On the day of the Palio, the Sienese get up early in the morning and begin preparations for the most important day of the year. You can easily observe that the entire day is dedicated to the race; everyday activities are put on pause and the hearts of the Sienese beat only for the Palio. At 8:00 a.m., the Bishop of Siena performs a mass for the horse jockeys in the chapel close to the Palazzo Comunale and immediately after the service, the last trial takes place at the Piazza del Campo. After the trial, each contrada performs a benediction ceremony in their churches and blesses their horses before the race.The race is free of charge for those who are willing to stand in the middle of the piazza under the Tuscan sun; however, you can also contact the owners of the houses facing the piazza who host spectators for a fee. There are also benches surrounding the piazza, but they are reserved for the prominent members of the contradas. I preferred watching the race in the middle of the piazza as I did not want to pay extra money; however, I had to get there very early to reserve the best spot. The piazza is in the shape of an ellipse shape that is also inclining. So, if you stand right in the middle, you probably will not be able see anything. I camped in a place near the racetrack that enabled me to see almost the whole Campo. I waited for almost four hours, watching the piazza become stuffed with people. Around 5:00 p.m., the horses arrive in the piazza and the race usually starts around 7:00 p.m. The horses have to run three laps around the Campo, overcoming dangerous points such as the very narrow curve of San Martino where collisions between the wall and horses have led to many falls in the past. Because of these accidents, many animal rights activists oppose to the race. The whole event begins and ends in the blink of an eye. The horse that comes first after three laps, even without its jockey, wins the race.

The winning contrada celebrates this victory throughout the night, roaming through the streets and getting drunk. Towards midnight, the victorious contrada gives a huge street party with free wine and food, welcoming the whole neighborhood as well as tourists.

Witnessing such a long-established tradition is a unique opportunity. Locals of the city manifest their passion and pride of being a part of Siena during the week of the Palio. Although Siena grabs you with its history the rest of the year, I strongly suggest you to visit the city during the time of the Palio to feel the warmth, passion and enthusiasm of Siena.