The father of the Gallipoli novels 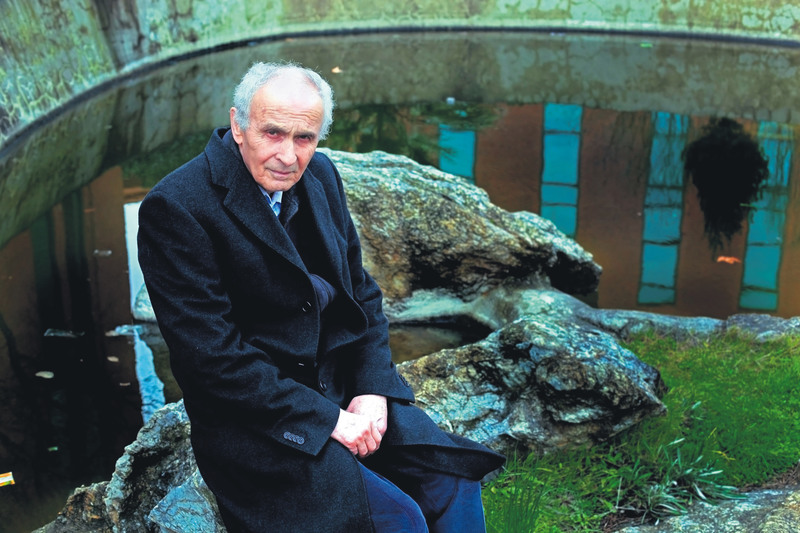 Known for his realistic approach in his historic novels, Mehmed Niyazi Özdemir is an important figure in Turkish literature. He has been honored as the CNR Book Fair's ‘Author of the Year' for his study on the Battle of Gallipoli

It was a cold and rainy autumn evening. Back then, we did not have smartphones or wireless Internet. Most of us did not know each other's home number and even if we did, we would not call.

I was going to meet one of my friends (whose name I cannot remember right now) in Çemberlitaş and then go to the cinema. I waited for him for almost an hour at the tram stop, but he did not show up. The weather was bad and I would have continued to wait for him if it were not raining so heavily.

I was bored and drenched. I began to walk towards the coast, trying to take shelter under the roofs of old buildings. As I was walking, an advertisement, which was written on a black board caught my attention - it said: "The Analysis of Our Civilization and Its Future, Mehmed Niyazi Özdemir." On impulse, I found myself in a deserted garden after entering through a winged door. It was the graveyard where Sheikh Bedreddin, Abdullah Cevdet and Abdülhamid II were laid to rest. I entered the single-story building only to see that besides the attendant, I was the first one to get there. I sat on one of the stools at the back.

A few minutes later, a shabby-looking tall man with muddy shoes came in. He was carrying a school bag on his back and had rolled up an old scarf over his head to protect himself from the rain. He glanced around the hall and sat down beside me. We greeted each other, engaged in small talk and complained about the meeting, which had not yet started. I did not understand he was the speaker until he got up and walked to the rostrum.

A year after our first encounter, I came across one of Özdemir's books, "Yazılmamış Destanlar" (Epics not yet Written) at a library near my house. I read the book, which was about the war between Turkish and Bulgarian troops in Edirne and the foundation of the Thrace Government. When I went to the library a week later to read Özdemir's "Çanakkale Mahşeri" (Çanakkale's Doomsday), one of the library attendants pointed Mehmed Niyazi Özdemir out and said, "He is one of our regulars. He comes before everyone in the morning and leaves after everyone in the evening."

We have known each other for almost 20 years now. I have observed him in many places including libraries, cafeterias, public transportation, home and hospital rooms. His nephew became my brother while he became my uncle.

After all these years, I can say that Mehmed Niyazi Özdemir is one of the most distinguished person in the world. He is compassionate, modest and loyal. He prefers being hurt over hurting other people. He is not one to beg for anything, nor does he show displeasure to anyone.

Although his colleagues are paid huge salaries for their articles in newspapers as well as radio and TV programs, he only receives a gift card or a tie as a thank you. He says, "Thank you. It looks something of good quality," and gives it to someone else who is in need. When he speaks at municipal conferences, he is only presented an activity report, though we all know that the other speakers are paid. While new age writers who write and sell fewer books than him walk with their noses high up in the air, Mehmed Niyazi Özdemir always walks looking ahead. He does not care about ceremonies, festivities and commemorations; just like he writes in his books.

He does not seek political favors. Who knows how many times different political parties offered him a seat in Parliament? Who knows how many politicians pay him a visit and personally invite him to Ankara? He did not accept any of these offers. Some tried to steal his heart by saying, "The library of the Parliament is very rich, you can work there," but Özdemir's answer was fixed. Our worlds, thoughts, causes and approaches might be different, but Mehmed Niyazi Özdemir is such a person. I just wanted you to know.

This year, Özdemir has been deemed worthy of an honor award as the "author of the year" at the CNR Book Fair for the first time, due to his study on the Battle of Gallipoli. He wrote his book "Çanakkale Mahşeri" in seven years after he visited hundreds of graves and battlefronts at the expense of being struck by facial paralysis. He is the father of the books on Gallipoli. His books have been published more than 50 times and they are the subjects of TV series, films and theater plays.

If people organize huge commemoration ceremonies for the Battle of Gallipoli and thousands of people from all over Turkey flock to Seddülbahir and Arıburnu on March 18, it is because of Özdemir's books. Some people claim that "conservatives and reactionaries try to highlight the Battle of Gallipoli in order to trivialize the Turkish Independence War." When I brought these allegations to Özdemir's attention, I remembered that he only tried to hide his hands.

Here is another story that I remember: When a military official told him that Atatürk should be seen more in the film which was adapted from Özdemir's book, he answered, "During the Battle of Gallipoli, Mustafa Kemal was lieutenant colonel and he was later promoted to colonel. He was on the support team when the war began. I mentioned Atatürk three times, although I only mentioned other generals and colonels that attended the war once. I have already given him prominence, my dear."

Mehmed Niyazi Özdemir is also an important literary figure for the Turkish historical novel. Furthermore, he is the founder of the documentary novel genre in Turkey. The traces of the realistic approach of his style are also visible in his book focusing on Yemen and Plevna. The characters featured in his books are selected very carefully after a thorough study of memoirs and archive records and installed in the atmosphere of the period. Özdemir tries to make fewer changes in the actual story and use plain language avoiding metaphors.

I will give a few tips to those who wonder: The young lover in Özdemir's novel "İki Dünya Arasında" (Between Two Worlds) is the author himself. Many years later, Hildegard came to Turkey and we met. I still remember her elegance and gentle nature. Moreover, the character Niyazi who is a university student in Özdemir's book "Dahiler ve Deliler" (Geniuses and Crazies) is also the author. He has also been his own inspiration while creating the character in his upcoming novel "Doğu'nun Efsane Çocuğu" (The Legendary Child of the East).
Last Update: Mar 05, 2015 1:00 am
RELATED TOPICS