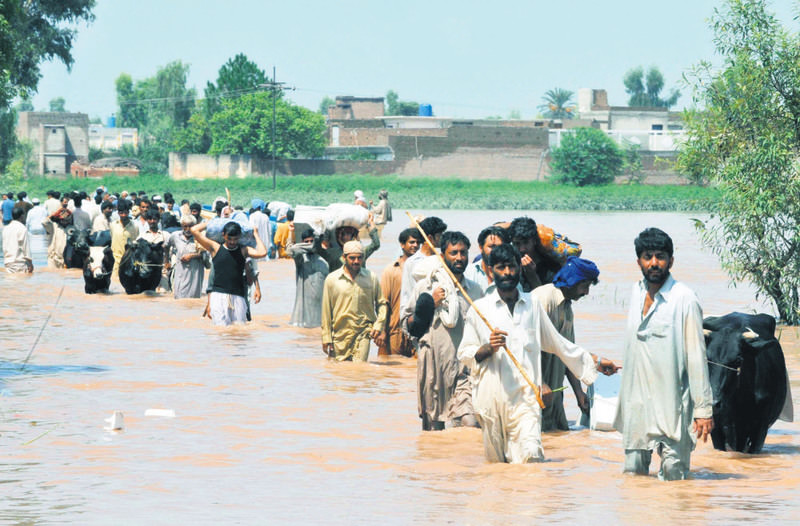 Last year, hundreds of thousands of people were left homeless due to heavy flooding in Bangladesh.
by Anadolu Agency Jun 23, 2015 12:00 am

Millions of Muslims are fasting during Ramadan despite water shortages caused by droughts and food prices inflated by crop failures. More action needs to be taken, especially by Islamic leaders, to protect the most vulnerable countries against climate change

As Muslims around the world continue to celebrate the Islamic holy month of Ramadan by fasting, many are doing so under conditions increasingly harshened by climate change. In some countries, the situation has got so bad that activists are asking for the topic to be tackled at Friday prayers, one calling for religious scholars to "take ownership of environmental issues." "They [the ulama, or scholars] don't seem to be doing it because they don't seem to understand what is going on," Fazlun Khalid told Anadolu Agency (AA) this week. Across Asia, Africa and the Middle East, millions are performing their fasts for Ramadan despite displacement from extreme weather, water shortages caused by drought and heat waves, and with food prices inflated by crop failures.

Five of the 10 countries most vulnerable to climate change, according to rankings by international credit rating agency Standard & Poor's (S&P), have large Muslim populations – Indonesia, the Philippines, Bangladesh, Senegal and Nigeria.

Though the challenges vary according to each country's geography, many of those hit hardest are in the remote, rural communities of developing countries, where governments have limited resources to tackle the rapid changes.

This is the case for Muslims in northern Bangladesh – the world's third-most vulnerable country, according to S&P – where many were displaced by flash-flooding last week.

Shahidul Islam Mondol from the northern Bangladeshi town of Bogra told AA that his small restaurant was one of the numerous losses that the town suffered in the floods. "Ramadan is coming and I don't know how people will do. Flood water

is everywhere – in the kitchen, in the front yards, in the cultivable lands," he said. "People are going out of their minds trying to decide where to take shelter. In this situation, many people will not be able to perform the fasting, even if they wish."

Mominul Haq Monju, from the northern Kurigram district, said that while the waters may recede quickly, day laborers will be affected by the damage to crops. "Because of the flood water, they have no work; they will face difficulty in observing Ramadan. Because of lack of food and money, they will suffer," Monju said.Last year, hundreds of thousands of people were left homeless by heavy flooding, which has become common in northern Bangladesh.

Reservoirs across the border in neighboring India often overspill, leading to flooding during the rainy season. But in the dryer months, they prevent water passing through to Bangladesh, leaving rivers dry and depriving locals of fish – a vital source of nutrition and income. Water scarcity caused by drying rivers and drought also affects farmers in several other developing countries, including Nigeria and Indonesia.Sukra, a farmer from Indonesia's West Java province, told AA that farmers in his village could not harvest a 30-hectare paddy field because their irrigation source dried up. "The water that normally flows from the river around here no longer flows because it dry," Sukra said, adding that he decided to feed the dead paddy to his cattle, which he will sell to meet his Ramadan needs.

In several countries, Muslims preparing for Ramadan said increasing heat levels and rising food prices – caused in part by crop failures as a result of extreme weather and exacerbated by increased demand as people stock up for the coming month – make the month harder. Mallam Mustapha Nasir, a resident of Potiskum in Nigeria's northeast, told AA the heat is consistently around 42 Celsius. "Because of drought in many parts of the north, especially in Yobe, Borno and other areas, there is intense heat that makes the weather very hot and harsh. This will make fasting very hard," Nasir said. "As a result of climate change and the lack of adequate rain, we are not able to grow tomatoes and yams. These are farm produce consumed across the country and its scarcity at this point in time means that the ones that are available are very expensive."

Such shortages have been heightened in northern Nigeria by Boko Haram's insurgency that has displaced hundreds of thousands of people.

The United Nations warned in April that 3 million people in the country's northeast are in need of food aid. According to the U.S.-based Famine Early Warning Systems Network, the conflict has prevented farmers from attending to their land. Umaru Tahir, a displaced resident of Maiduguri in the northeast, told AA villages have become deserted as people flee the insurgency. "This has huge economic effects on the people. Businessmen and women have left our villages because of the danger and uncertainties associated with insurgency. People are now at the mercy of charity from government and other philanthropists," Tahir said. Those preparing for Ramadan in Egypt – which is currently experiencing a heat wave – also said the temperature and increased food prices are affecting their preparations. Ali Moussa, an accountant and father of three, said some farmers have stopped growing certain crops that are vulnerable to high heat. "This automatically leads the prices of alternative foodstuff to increase. But still we are trying to cope, for instance, by finding some alternative foods for items whose prices go higher," Moussa said.Palestinians also shared their concerns with AA about the increasing financial burdens of Ramadan, when families eat communally and often have specific traditional dishes after a day spent without food or water.

Ahmad Bitawi, a 35-year-old teacher from Nablus, said his salary barely lasts to the middle of the month. "I had to borrow money to cover the needs of my family during Ramadan and it will take a long time to pay off this debt," he said. "In the village, we are suffering from water scarcity and this may cause a problem during Ramadan since consumption is high at night. Last year, the water cut off for several days during Ramadan, so we had to buy it at a high price."

Climate activist Khalid said the effects of climate change being felt by Muslims around the world should be a prompt for Muslim leaders to take the global problem more seriously. He said they need to "take ownership of environmental issues." He warned, however, that there is currently a lack of awareness, with climate change rarely being brought up as a topic in religious lectures or weekly sermons during Friday congregational prayers. "The Ulama and the leadership must take the reins of this issue. They don't seem to be doing it because they don't seem to understand what is going on," he said. "In a sense, they have lost the basic message about this. Islam is intrinsically environmental; the Quran is intrinsically environmental … Climate change is a warning sign. Creation is telling us you can't treat us like this."