Sahur in Istanbul, iftar in Komotini 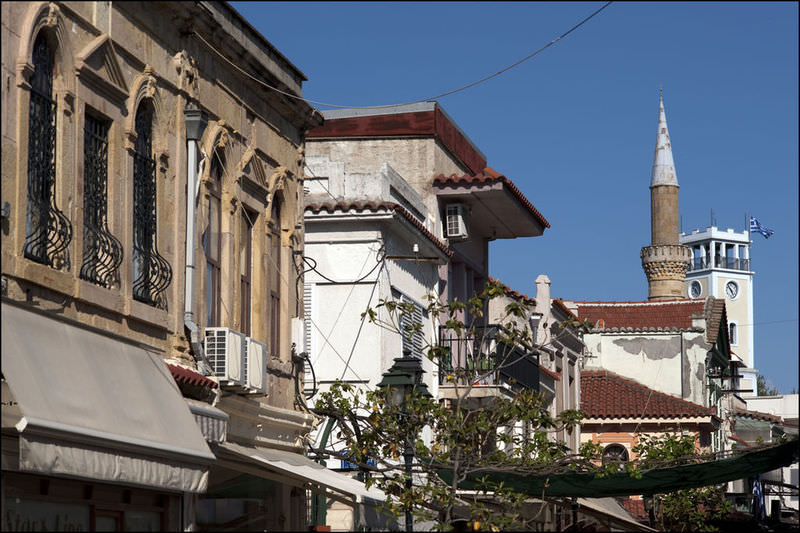 The communal atmosphere of Ramadan can easily be found in the Balkans. Komotini, where a significant Turkish population lives, is one of the cities where you can see traces of the Ottomans and celebrate the Islamic holy month with various activities

It's nighttime, and I'm walking down a narrow alleyway lined either side with white houses. There's a small man in front of me beating a drum as if to warn of my approach. Am I in some David Lynch dream sequence? No, I am in Şahinköy, up in the Rodopi Mountains, going to a sahur (pre-dawn meal) held in the village square. That small man is, in fact, a nine or 10-year-old boy beating the drum to wake the people up for sahur as if his life depended on it. A few minutes later, he is joined by another one and there is a drum-off. We have been told that Şahinköy, having been robbed of almost all its livelihood, now produces drummer boys and hafizes – boys who memorize the entire Quran; and what wonders they are too!

For 13 years now, BURA, one of the at least three alumni organizations of Boğaziçi University, has been making Ramadan trips to Western Thrace, namely Gümülcine (Komotini) and İskeçe (Xanthi). So, we start off midday in Istanbul on a Saturday and make our way to Gümülcine – a town closer to Istanbul than İzmir or Samsun, only six hours away on a bus if, like us, you are lucky at the border. On this trip the head of an organization for Western Thrace Turks accompanies us. He has the mic and reminds us that Western Thrace had become a home to Turks well before Istanbul. He tells the story of how Thrace was lost to the Turks, about the sad history of the first Turkish republic ever founded in Thrace in 1913 with its own postal system, army and newspaper, but which lasted for only six months. As we near Gümülcine, he points to the chimneys in the industrial zone. "No fumes as you can see. Nothing going on here. The economic crisis has been really bad. May God help them," he says. The same man who has just given us a history of World War I, in which the Greeks are cast as the spoiled cousin of the Allied powers.

In Gümülcine, we walk through the old town, learn about the elected and appointed mufti split, and take photos of the çarşı (bazaar). We also see the "Oxi" (no) graffiti in reference to the recent economic referendum in Greece. Our attention, with the camera app open on our cellphones, turns towards Komotinites queuing at ATMs since, as the children of social media, we are well-versed in the knowledge of what picture will get likes on Facebook and retweets on Twitter. For iftar, the evening fast-breaking meal, we are taken to a nearby village. Dinner consists of soup and "meze" (small hot and cold dishes) followed by a plate of grilled meat, köfte (meatballs), and liver. We're very much in Thracian territory here, though. Although the food is familiar, there is one thing conspicuous in its absence on the iftar table: The tea. There is no grey or black thermos that people pass between themselves right after the first course. We are in coffee country, and I am reminded of how Turkey became a nation of tea drinkers only toward the middle of 20th ‎century. I am reminded how, in more than a few things, Western Thrace and the Balkans remain much more Ottoman than Turkey. One of the students sitting across from me tells me she still can't get used to the fact that the waiters speak in Turkish. I remind her that there is a corridor of Turkish-speaking peoples all the way to Sarajevo. The mufti gives a short speech after iftar, telling us how happy he is that visitors from Turkey do not forget that they have brothers and sisters on the other side of the border. I am a bit of a veteran of these dinners, and for the first time, the speech includes a call to invite Greek neighbors to the next iftar in Gümülcine so that not only those who speak the same language but also those who live off the same land get to break bread together. Good times ahead.

Prompted by severe caffeine withdrawal and the word frappe on our lips, we head to the main square of İskeçe. Our hosts take us to a cafe where the waitress speaks Turkish – if not a native Turk altogether. We have scarcely heard Greek since our arrival on this side of the border, but the Greek alphabet teases us everywhere. Those with math and physics training make out the odd mu and omega; those in the humanities don't even try, as Greek is absent even from Turkish humanities curricula. Above each exit sign on the motorway, one can make out the word "Exodus," prompting Bob Marley to begin playing in my head each time.

We take a seat at a cafe under the clock tower – what is an Ottoman square without a clock tower? – order our frappes and, despite warning to the uninitiated, drink it too quickly. Basically, the whole group is now high on caffeine. It's past midnight, and the table behind us has become even more animated than we are. I eavesdrop on their conversation – most of the conversing seems to be happening in Greek with Turkish words thrown in. A sideways glance makes me think they don't look Turkish. Then I check myself and question my essentialism: What is a Turkish look? One of them is singing "Oxi oxi oxi oxi delale oxi" to the most well-known Kurdish tune, and we are given an accurate preview of what the results after the referendum turned out to be.

Our group seems to be constantly drawn to borders, so we set off towards Bulgaria and up circuitous narrow roads in the dark. Our guide tells us how the Greek government set up a checkpoint at the entrance to Şahinköy during the war in Cyprus, and since then, it has been a war of attrition. Because there is no flatland, the most reasonable livelihood would be animal farming, but the Greek government has curtailed the villager's grazing area to the extent that it was impractical to keep and raise animals. So, the men go abroad to work and take a vacation during Ramadan, causing the holy month to become a double blessing for families.

After our arrival of pomp and circumstance, we sit down to a sahur of more meat and olives. There is tea too. We're sitting by a creek that we cannot see in the dark, but we know we are very close by the croaking of frogs. We are sleepy and a bit sloppy with our eating. By the time we finish, the table looks like something from an Emir Kusturica film. After sahur, I end up being the only woman who has the stamina to walk up to the mosque. I climb up to the balcony with Salih, a nine-year-old who is training to be a hafiz. Before fajr starts, he whispers in my ear: "This is the fastest imam in Şahinköy; he is my uncle."

As we leave the village, the Greek flag above the newly-built church with no congregation at the exit and entrance to the village salutes us. In daylight, we can clearly see the road we climbed last night, causing us to appreciate the skill of our driver as we take the turns above several precipices. We come head-to-head with cars coming into the village to cast their votes in the referendum. And then we head back via Egnatia toward Istanbul, where all roads lead. Everyone has plans for iftar in various parts of the old capital and the muezzin waits for no one.