The message of the monuments and memorials in Washington 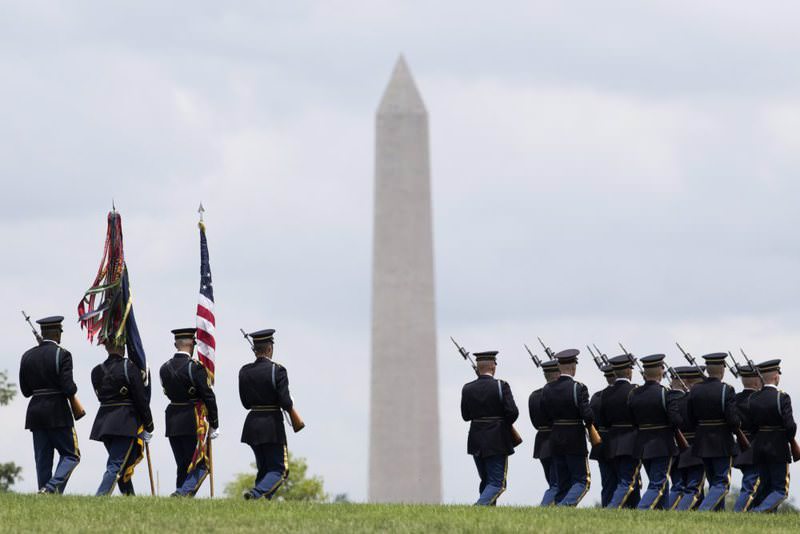 When touring Washington, D.C., American history is laid bare by the many monuments situated around different parts of the city. They are generally dedicated to past statesmen and soldiers that fought in wars such as Vietnam, Korea and World War II. But one may have the feeling that enough is enough: There is no need for new monuments and there is no need for new wars

Last week I was fortunate enough to have a few days in Washington, the nation's capital. The impressive atmosphere created by the monuments and memorials in the Tidal Basin on the Potomac River pervades throughout the area.

When visiting Washington, there are many places that beckon tourists, like the Smithsonian, the Capitol building, and the White House. But we had just one morning, a beautiful sunny morning, so we decided to head down to the Tidal Basin where there are a large number of memorials.

The first one that you encounter when emerging from the metro station is the Washington Monument.

This monument is constructed out of granite and something known as bluestone gneiss, which looks like granite. The monument, which measures 169 meters, commemorates George Washington, the first American president.

After Washington's death, Congress decided to erect a memorial to the president in the capital city. However, the Jeffersonian Republicans objected, not only because Washington was the symbol of the party they opposed, but the idea of building monuments to commemorate famous or powerful men was anathema to them. The outbreak of the Civil War further postponed the construction, with Washington being seen as symbolic of the north, but by the late 19th century this situation had normalized and the construction of such a monument had ceased to be problematic.

A competition was held to determine the design of the monument. The expectations for the design were described as follows:

"It is proposed that the contemplated monument shall be like him in whose honor it is to be constructed, unparalleled in the world, and commensurate with the gratitude, liberality, and patriotism of the people by whom it is to be erected ... [It] should blend stupendousness with elegance, and be of such magnitude and beauty as to be an object of pride to the American people, and of admiration to all who see it. Its material is intended to be wholly American, and to be of marble and granite brought from each state, that each state may participate in the glory of contributing material as well as in funds to its construction."

Robert Mills won the competition. The obelisk that stands today was planned to be the center of a circular colonnade and Washington was to stand on top in a chariot. There would be 30 important Revolutionary War heroes arranged inside the colonnade.

The price tag for this proposed work was more than $1 million, or nearly $600 million in today's money. The decision was to start with the obelisk and to deal with the colonnade later. However, the obelisk remained standing on its own. This too was a controversial decision. People have compared it to a stalk of asparagus or that it was too modest to reflect the glory of the United States. Looking at it today, it seems that the best decision was made. A complicated neo-classical colonnade with a prancing horse would not have had the simple elegance of the Washington Monument.

There were difficulties raising funds to complete the obelisk, and a few controversies – the pope's stone, so called because it was contributed by Pope Pius IX, was destroyed by an anti-Catholic party in 1854, only to be replaced in 1982.

There are 194 special stones in the monument that came from different states, different countries and different representatives. There is a stone inscribed in Welsh that says: "Fy iaith, fy ngwlad, fy nghenedl Cymru – Cymru am byth" – My language, my land, my nation of Wales – Wales forever. There is another inscribed stone this time the inscription is in calligraphy that was donated by the Ottoman Empire. There is an imperial "tughra" by Hasim Efendi and an inscription by Kadiasker Mustafa İzzet Efendi, the same artist who designed the medallions in the Hagia Sophia.

Fifty U.S. flags fly around the monument. On the day we went the flags were flying at half-mast in mourning and in commemoration of the students who died in the dreadful massacre in Oregon.

At the opposite end of the long expanse that stretches from the Washington Monument is the Lincoln Memorial. This structure is in the form of a Greek temple, with a statue of Lincoln seated inside. The memorial is surrounded by 36 Doric columns, one for each of the states that existed at the time of Lincoln's death.

There are inscriptions of the Gettysburg Address and Lincoln's second inaugural address inside the building. These great speeches are accompanied by a great atmosphere and it is from this spot that Martin Luther King Jr. delivered his "I Have a Dream" speech in 1963.

Above the inscriptions of Lincoln's speeches are murals. The ones on the south wall depict Freedom, Liberty, Immortality, Justice and Law (immortality seems a bit out of place, but there you go). On the northern wall are Unity, Fraternity and Charity. 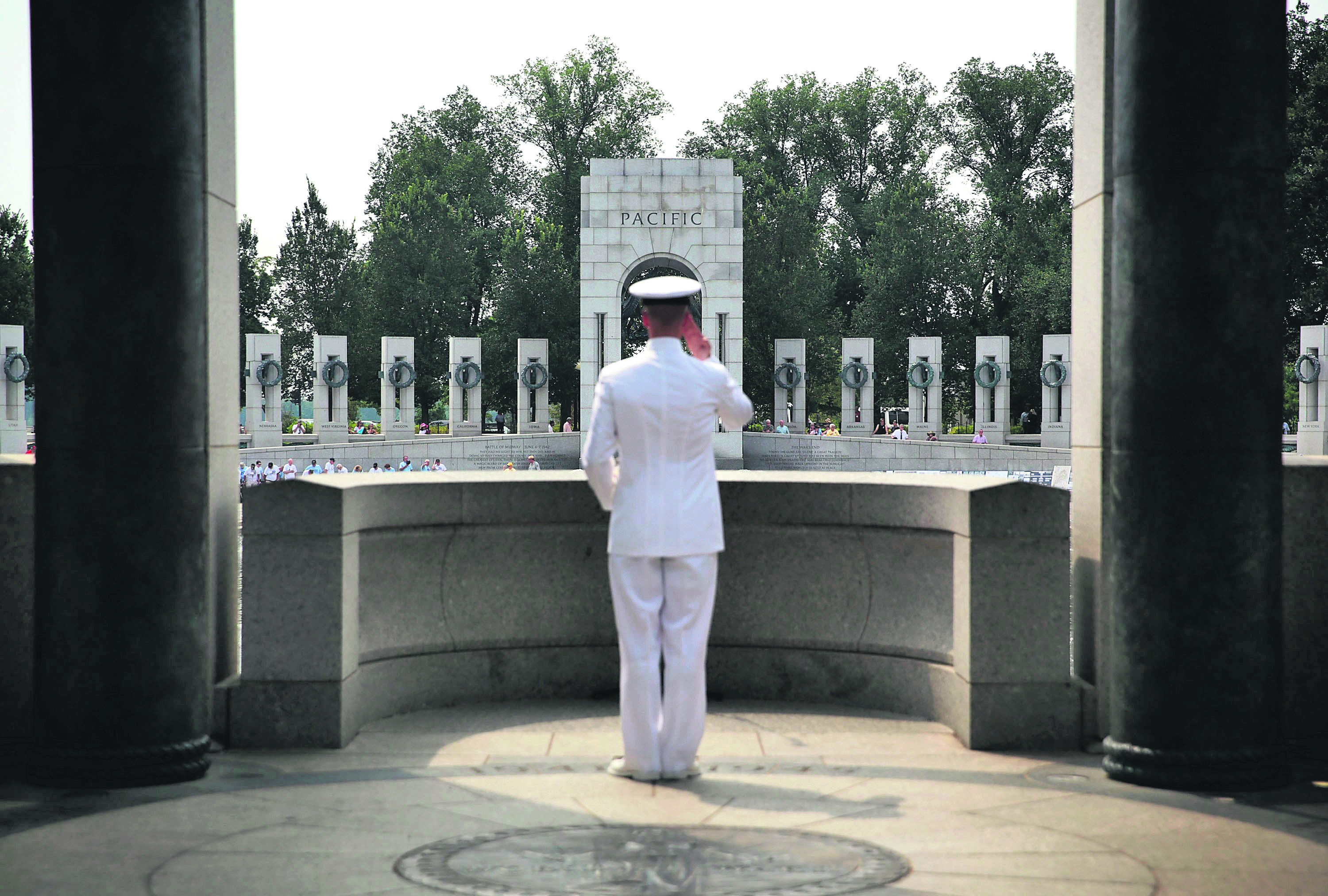 There are many inscriptions on the World War II Memorial, from the names of states to the names of oceans. But the most interesting are perhaps the "Kilroy was here" inscriptions that American soldiers used to indicate that they were there to protect during the war.

Between the Washington Monument and the Lincoln Memorial is the World War II Memorial. This is dedicated to Americans who served in World War II. There are 56 pillars in total and two small arches surrounding a plaza and fountain. The memorial was opened in 2004 and was dedicated by President George W. Bush. There are many inscriptions on the memorial, from the names of states to the names of oceans. But the most interesting are perhaps the "Kilroy was here" inscriptions, which American soldiers during the World War II used to indicate that they were there to protect.

Then there is the Freedom Wall, which contains 4,048 gold stars, each representing 100 Americans who died during the war. In front of the wall is written: "Here we mark the price of freedom."

To the southeast of the Lincoln Memorial is the Korean War Veterans Memorial, commemorating those who served in the Korean War. The ground-breaking ceremony for this memorial was carried out by President George H.W. Bush in 1992, and dedicated by President Bill Clinton and Kim Yong Sam, then president of Korea.

This memorial is a triangle that intersects a circle constructed out of black granite. There are more than 2,500 photographic images sandblasted into the granite that represent the land, sea and air troops who were involved in this war.

Nineteen stainless steel statues designed by Frank Gaylord stand within the triangle, all a bit larger than life at over 2.2 meters tall, weighing approximately 500 kilograms.

In the circle is the Pool of Remembrance, where the numbers of soldiers killed, the wounded, the missing in action or held as prisoners of war are given. On a plaque is inscribed: "Our nation honors her sons and daughters who answered the call to defend a country they never knew and a people they never met."

There is one more message here: "Freedom is not Free." 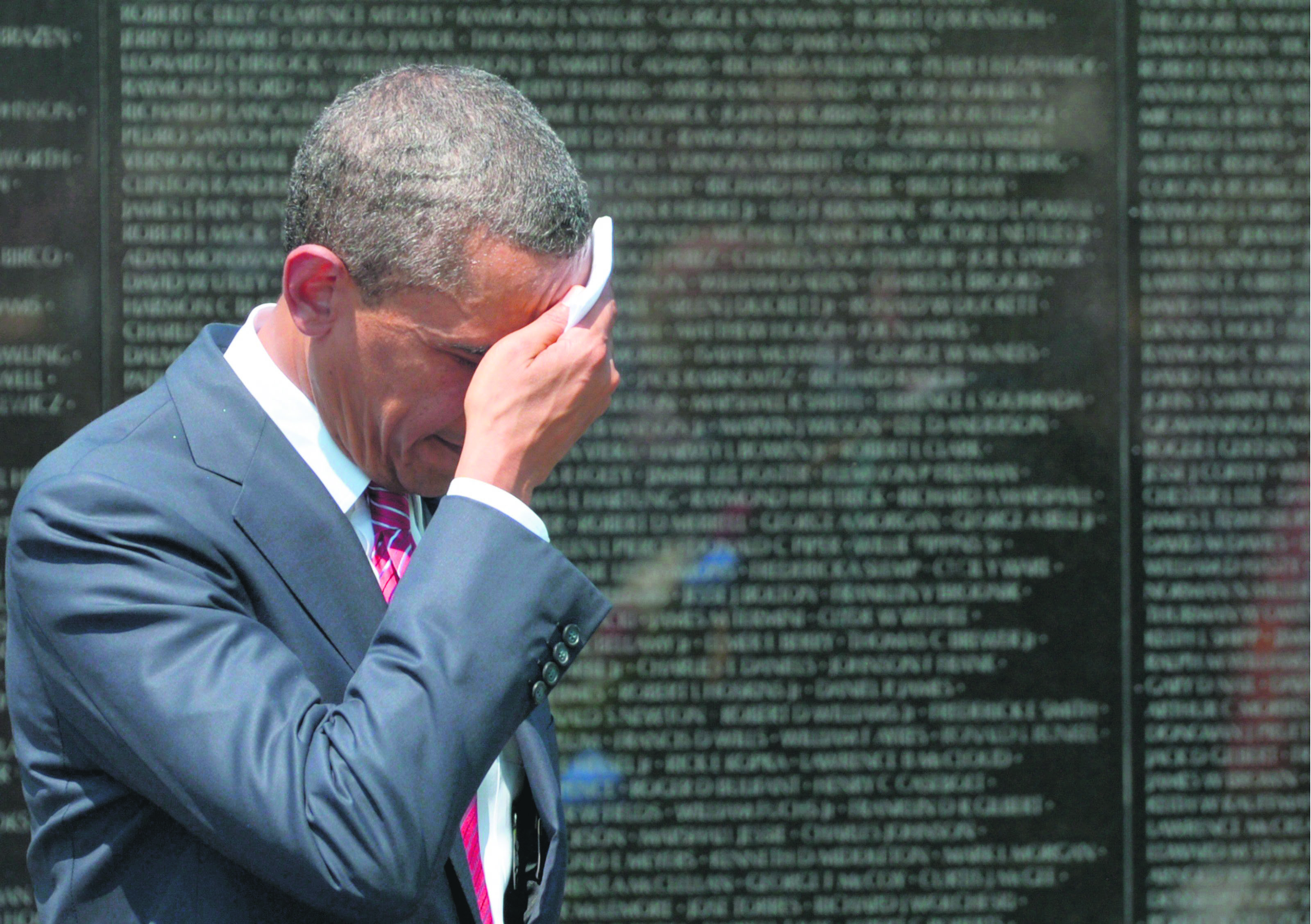 Names of over 58,000 servicemen and women who died during the Vietnam War are listed on the Vietnam Women's Memorial.

Finally, there is one more monument that should be mentioned, the Vietnam Veterans Memorial. Here the names of over 58,000 servicemen and women who died during the Vietnam War are listed.

The main part of the memorial was completed in 1982. When you look at the wall, reading the names, your face is reflected back at you. One wall faces the Washington Monument, the other the Lincoln Memorial.

Next to the names is either a diamond or a cross. The cross indicates those who died while the diamond indicates missing in action or prisoner of war. Upon confirmation of the death of the person in question the diamond is superimposed with a cross.

Nearby is the statue known as "The Three Soldiers," representing black, white and Hispanic soldiers. There is also a Vietnam Women's Memorial, dedicated to the women in the war who were mostly nurses. Three women in uniform stand with a wounded soldier.

There is talk of creating a memorial to veterans of the Iraq and Afghanistan wars, but the problem is that there is as yet no definite finish date for these conflicts.