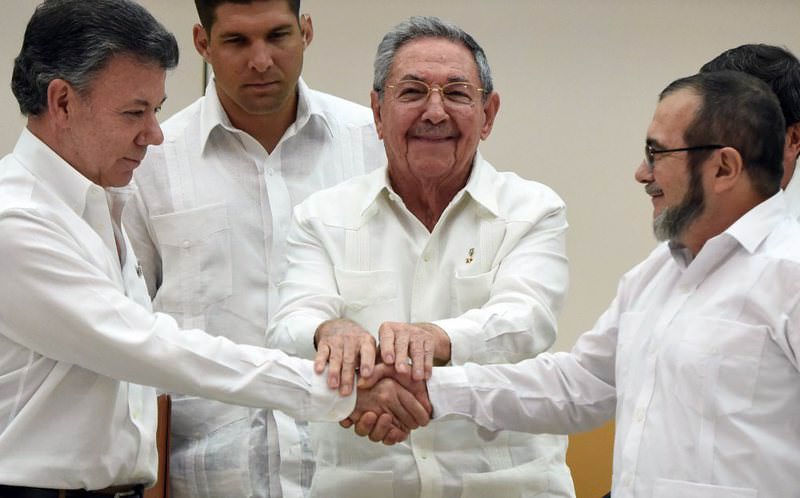 Many countries in the world have ongoing battles with terrorist organizations. In addition to Turkey's battle with the PKK, countries like the U.K. and Spain have faced their share of terrorist activities, both at home and abroad. Colombia is one such country that looks as if it is close to solving its problem with a left-wing terrorist organization

In the 1950s and 1960s, Columbia managed to solve the problems that existed between ruling parties by adopting a shared approach to power. One policy introduced during this era was known as Accelerated Economic Development, which was introduced to the country in the 1960s. This policy gave subsidies to industrial farming, and led to the creation of large-scale private farms. Thousands of poor farmers were turned off their smaller farms; these people, with no other place to go, were forced to migrate to the cities, where they formed a large industrial labor pool. Soon there were more than 400,000 landless families, and the industrial farms accounted for more than 77 percent of arable land. As a result, the rich dominated the land, while the poor became displaced and marginalized. During this time, rural workers suffered from widespread malnutrition, and many people died of preventable diseases while the infant mortality rate rose drastically.

In the 1960s, the Colombian government began to crack down on the large number of communist groups in the country. In 1964, the military wing of the Colombian Communist Party, the Revolutionary Armed Forces of Colombia-People's Army (FARC), was a group of 48 people. This group was attacked by 16,000 Colombian troops and driven into the mountains. The number of FARC members began to grow while the organization was in hiding in the mountains.

Today, FARC is a large, armed guerrilla movement. It is estimated that 20 percent to 30 percent of FARC consists of minors who have been forced to join the organization. The conflict between guerrilla groups in Colombia has lasted longer than any other war in the Americas, and it has lasted nearly as long as the Basque separatist movement in Spain. It is estimated that 220,000 people have died in the bloody Colombian conflict. Moreover, it is a complicated conflict, involving drug cartels that tried to corner the lucrative cocaine market. Criminal gangs took advantage of the unrest caused by the war between FARC and the Colombian government to take control over the production and sale of cocaine, the greatest source of money in Colombia. The chaos created by multiple sides fighting the government over control of land, money, drugs and resources has meant that many gangs and terrorist groups have formed, leading to the oppression of the Colombian people.

FARC has been classified as a terrorist organization by Colombia, the United States, Canada and the European Union. However, not everyone is in agreement on this matter. In the same way that Russian President Vladimir Putin claims that the PKK is not a terrorist organization, former Venezuelan President Hugo Chavez refused to categorize the far-left FARC as a terrorist group. But no one disputes that FARC is a group that has kidnapped leading statesmen and high-ranking military officers as well as ordinary civilians, forcing young people to join their service and taken the lives of thousands.

An environment of peace in Colombia, something that has not existed in the country for 50 years, would mean that security forces can focus on fighting gangs and protect the country's people. The proposed peace looks as if it might actually materialize as well. There are a number of reasons why this time peace might be permanent. One is that many outside parties are interested. From Pope Francis to the government of Norway and ordinary Colombian grassroots organizations, many people are ready to sit at the table to make sure that this is a lasting peace.

The Pope has personally asked the government and the rebels to bring an end to the conflict. He has said that failure is not an option and that it is time to stop the bloodshed. In addition, the secretary-general of the World Council of Churches said: "The churches believe in reconciliation … and are committed to contribute to the peace-building process."

Colombian President Juan Manuel Santos is keen to have the international community help establish justice and peace in the country during the peace talks and throughout the post-conflict process. Cuba is also involved, having hosted peace talks between the rebels and the government.

Norway has long been interested in the peace process, and is committed to providing assistance in the post-conflict phase of the process. The Norwegian government has said there can be no development without peace. Norway is investing in peace because it is necessary for Colombia, a country with a wealth of natural resources, to attain its full potential.

Civilians at the grassroots, regional and national levels have been working hard to achieve this peace as well. Just last year, FARC declared a unilateral cease-fire, but it did not last long. Once more a unilateral cease-fire has been declared, and it is under this that real progress is finally being made. Yet, according to Columbian Senator Alfredo Rangel, although this last cease-fire was the longest, "The FARC has already called for five unilateral cease-fires that haven't worked. They continue drug trafficking … extorting the population … recruiting minors, laying anti-personnel mines [and] rearming."

The teams involved have tentatively agreed that a final peace will be signed at the end of March 2016. However, the final decision about the peace treaty will be presented in a referendum so that Colombians can decide if it is a fair peace accord or not. A referendum is necessary, as drafting a lasting peace is not an easy task. There are literally thousands of rebels who need to be reintegrated into society. This task will require retraining as well as psychological support for the former rebels. In addition, the unfair distribution of land will need to be reformed and farmers will have to be encouraged to plant new crops to take place of the lucrative illegal coca crops. It is for this reason that a referendum has been decided on. Unless the country as a whole commits to the transformation, it is not likely that the peace will have a chance to survive.

As stressed by the nongovernmental organization Advocacy for Human Rights in the Americas: "This is a positive development … we can expect real progress in the next few months, but not miracles. There will likely be further setbacks as the pendulum inevitably swings back. As we contemplate the next few months, it's worth looking at the volatile swings of 2015 from both sides."

U.S. Secretary of State John Kerry has said that the deals "represent historic progress toward a final peace agreement. … Peace is now ever closer for the Colombian people and millions of conflict victims."

The tough policies that Alvaro Uribe, president of Colombia from 2002 to 2010, took against FARC have been said to have played an important role in convincing the guerrillas to come to the negotiating table. Uribe is not in favor of the peace process, claiming that it would "generate new violence" and that it puts the state's soldiers on an equal footing with the guerrillas.

There is a lesson to be learned here. Peace doesn't come easy. Terrorist organizations declare unilateral cease-fires, which they unilaterally break. The government and the people thus find it hard to trust them. In such an atmosphere, unless outside parties come to the talks, it will be hard for the two sides to establish trust, to build a new future. But for a country to develop, or to continue developing, it is extremely important that terrorist organizations cease to carry out their heinous crimes. The most permanent solution is a permanent peace. But both sides must be willing to cooperate. It took the involvement of the USA in the IRA-Great Britain peace talks to get what seems to be a lasting peace. It has taken a number of interested parties in Colombia to get the parties to start negotiations. And whatever the results it will be the people who decide.

What can be learned from the peace talks between the IRA and Great Britain, between ETA and Spain and between FARC and Colombia is that a peace treaty is important. But more important is that the treaty be realistic and implementable. The sitting down of the parties at the table is no guarantee of peace; nor is the signing of a peace agreement the same as permanent peace. At such talks impartial parties should be involved to support the talks, but it is up to the interested parties to implement the peace, to ensure that it is lasting.

The lesson to be learned here is that a lasting peace does not come easy. Terrorist organizations declare unilateral cease-fires, which they unilaterally break. The government and the people can find it hard to trust them. In such an atmosphere, unless outside parties facilitate the talks, it will be hard for the two sides to establish trust or build a new future. But for a country to develop or to continue developing, it is extremely important that terrorist organizations cease to stop committing criminal operations. The most permanent solution is permanent peace, but both sides must be willing to cooperate. It took the involvement of the U.S. in the Irish Republican Army- U.K. peace talks to achieve lasting peace. It has taken a number of interested parties in Colombia to get the parties to start negotiations, and the people will decide what the result will be.
RELATED TOPICS