The good old days, when dumping snow in the Bosporus was amusement 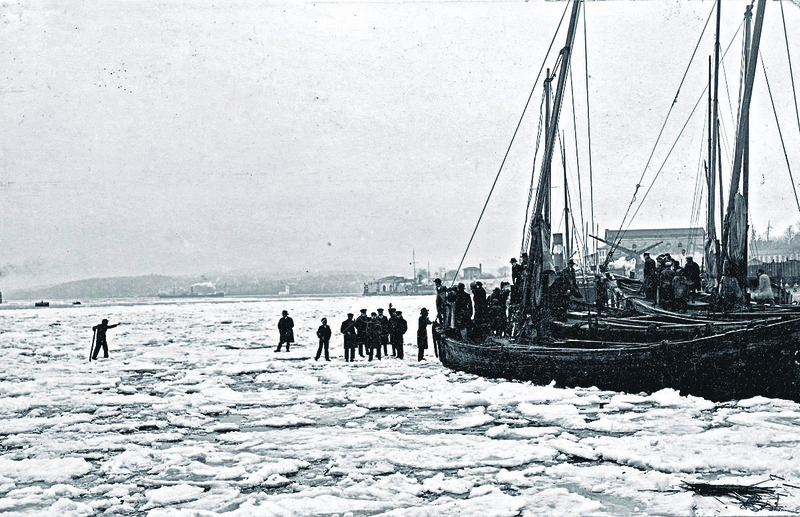 Snow was much more fun in the past. People used to forget everything when glittering snowflakes were falling on the ground. For some it was a pain. There were times when harsh weather and snow brought the end of a sultan

While people were asking why the weather was not cold enough and when rain and snow would come, cold weather and snow arrived at last. No matter what people say, our generation has seen cold winters, with snow covering the area as deep as a man is tall, icicles hanging from roofs and snow storms that prevented us from seeing beyond our noses. Once upon a time, the waters of the Golden Horn and even the Bosporus froze. Ottoman traveler Evliya Çelebi stated in one of his accounts that even cats froze while jumping from one roof to another in the 17th century. Starving wolves came down to Istanbul's present-day favorite districts of Mecidiyeköy and Levent looking for food not long time ago.

It is said that snow brings abundance. The farmer awaits his field to be covered with snow in order to harvest as many crops as possible, city-dwellers hope for snowfall to fill the dams so as not to experience drought in summer, children look forward to snow to have snowball fights and build snowmen. In the past, children used to hope for snowfall, but adults found it selfish and scolded them, saying: "Don't you care about the poor." Danish poet and author Hans Christian Andersen's story "The Little Match Girl" had a deep effect on me when I was a child. Whenever it snowed I remembered the story and felt sad.

It is a very exciting thing to see everywhere covered with thick snow when you wake up in the morning. As it is not possible to go out, one has to take a shovel and remove the snow, and snow that is shoveled and piled on both sides of the road stays for months. Apart from the road in front of the house, the snow piled on roofs also has to be removed so the roof does not collapse. Winters lasted longer in the past, and snow did not melt for days or months. Streets were covered with ice and it was hard to walk. People wore galoshes over their shoes and also tied pieces of cloth to their shoes to walk. People did not go out much if it was not necessary and the "white captivity" began. However, staying at home was fun during winter nights. Men and women were talking in separate rooms and playing games. They ate popcorn and chestnuts and drank coffee.

Sometimes the sun showed its face or it rained, melting the snow. Children were the ones who were the most upset about this. However, sometimes even the sun could not melt the snow due to frost. The frost that came after the rain froze on the snow. Windows iced up and it became harder to walk on the streets. Many people fell down and were laughed at, but then those who laughed felt guilty. Children were also happy about the frost because they could ice-skate. If they did not have skates, they slid on the ice on wood. There are many things that children can entertain themselves with, but today's children, whose every demand is met, do not even look at ice-skates.

Snow was loved back then. When it fell with all its clean whiteness, redeeming itself just like the smile of a misbehaving child, snow made people forget everything. Late period Ottoman poet Cenab Şahabeddin wrote a poem called "Elhan-ı Şita" (Winter Tunes). It begins: A white tremble, a fumy flight / Snow falls down just like a bird lost its mate. Many people thought about these verses when snowflakes, which do not like each other, fell down slowly to earth under the wings of angels.

People were never frightened by snow in the past. When it was snowing, they did not flock to bakeries in fear that they would not find bread the next day. This is because people used to bake bread at home. Even though they did not go out for days, the cellar at home had sufficient food. The snow began to melt in March and April, and everywhere was covered in mud. That time was the worst time as it was more difficult to walk on the streets compared to walking on icy roads. Sometimes snow made people unhappy. The poet who said: "Yağmayın yollarıma, durun kar taneleri" (Do not snow on my road; stop snowflakes) expresses his complaint of snow hindering him from meeting his lover. Another line: "Her yerde kar var, kalbim senin bu gece" (There is snow everywhere, my heart is yours tonight), is a message to a distant lover. Despite a sweet and nice natural occurrence, snow is sometimes harsh and creates trouble. In the past, roads to some villages and cities remained closed for months due to heavy snow. The villages' access to cities was impossible in winter months. If someone was sick, villagers could not take the patient to a physician. In Turkish theater literature there is a play, "Buzlar Çözülmeden" (Before Ice Melts Away), which was later adapted into a film. In the play, a newly assigned governor cannot access the village due to snowy weather and a madman declares himself governor.

Many commanders lost wars due to snow and many emperors were dethroned for the same reason. In 1812, the army of Napoleon and, in 1943 Hitler was defeated due to snow, not the Soviet army. Two Ottoman sultans lost their throne due to snow. At the time of Sultan Osman II's reign there was harsh cold and the Bosporus froze over. A poet recorded it at the time in a poem: "Bin otuzda derya dondu, ben deniz geçtim" (The sea froze in the year 1621, and I, your humble servant, passed over it). At that time, ships carrying food from Rumelia to Istanbul were unable to access the harbor. The rise of food prices accompanied famine and brought an end to the sultan's rule along with his life. Similar harsh cold was seen during the reign of Sultan İbrahim, the brother of Osman II. In the past, people held someone responsible for natural disasters. Europeans used to accuse Jews for the plague, while sultans were responsible of natural disasters in the Ottoman society.

In winter, transportation was available by use of sleighs. In northern countries, dogs were used to move sleds, but in Anatolia horses used to do it. It was very hard to travel when there was a blizzard or frost. Passengers could endure cold to some extent if they had fur or blankets on their knees. Nevertheless, it was a chance to go somewhere under such difficult conditions.
RELATED TOPICS