Necmettin Erbakan in an official ceremony at Atatu00fcrk Mausoleum. He resigned upon the 1997 military memorandum.
by Ekrem Buğra Ekinci Aug 26, 2016 12:00 am

The military's ultimatum on Feb. 28, 1997 brought another period of oppression in Turkey, this time for the conservative majority. Called as the 'post-modern coup,' the military ousted the Welfare Party-led government and many people faced impediments in education, working and social life

Among the four coups in the history of the Republic of Turkey, the strangest one was on Feb. 28, 1997, when the National Security Council (MGK) held an emergency meeting and forced the government to sign decrees that stood as a memorandum. The decrees of Feb. 28, devised by an alliance between the military and bureaucracy, are commonly referred to as the "post-modern coup." They brought very important political, economic and social reforms in Turkey. 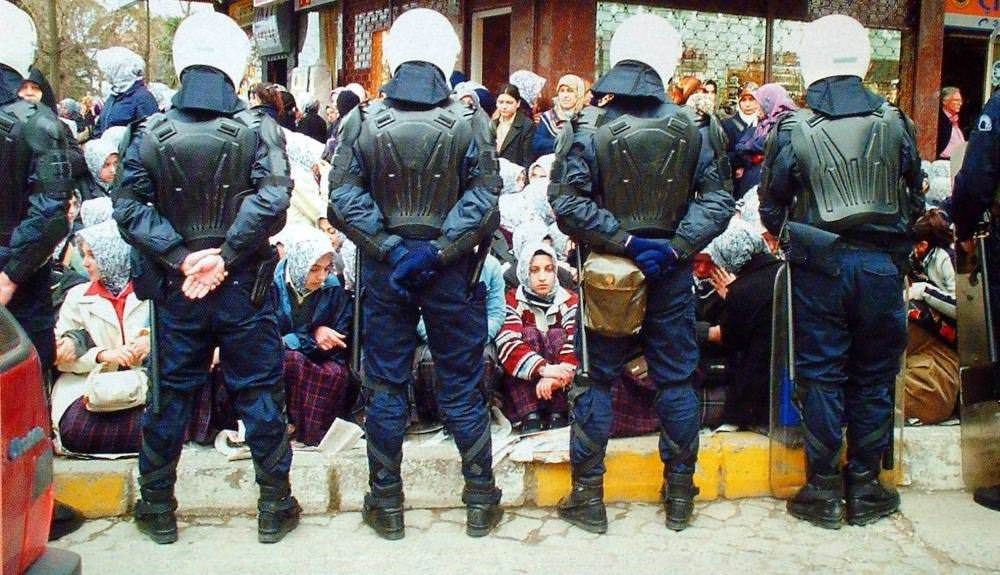 A group of female students protesting the headscarf ban that was imposed within the Feb. 28 decrees.

Necmettin Erbakan was a brilliant and conservative academic, a graduate of Istanbul Technical University (İTÜ) in 1948 who received his PhD degree in Germany. He went into politics with the Justice Party (AP), although his nomination to Parliamentary deputy was twice hindered by Süleyman Demirel, the AP leader. Erbakan decided to run for Parliament as an independent in the 1968 elections, and founded a political party called the "National Order Party" (MNP). The party, called "Milli Görüş" (or National Vision in English), adopted an Islamist and nationalist program, which was anti-communist, anti-Zionist and anti-imperialist. The party's defining feature was opposition to the U.S. and Israel, and the economic program was pro-state and described as " Adil Düzen" (Fair Order).

İsmet İnönü dismissed the conservative party, saying "Let them found the party so that we can see how low their support is," although the party was closed following the 1971 coup for their opposition to the state policy of laicity, or secularism. Yet party members were not banned from politics, and Erbakan left for Switzerland. A popular rumor suggests that he was persuaded to return to Turkey by two generals, who wanted to prevent marginal left-wing and center-right parties from coming to power. A new political party following in the ideological footsteps of the MNP, the National Salvation Party (MSP), was founded and Erbakan got behind the wheel.

Although the party received the support of the newly flourished Anatolian bourgeoisie and the politically disenfranchised segment of the society who felt suffocated by the harsh repression of republican secularism, some parts of the Islamic community remained distant.

These communities continued to support center-right parties because they felt alienated by issues including the MSP's modernist understanding of Islam, intimacy with 12er-Shiite Iran and Wahhabist Saudi Arabia, as well as Erbakan provocative behavior towards the politically-dominant Kemalists.

Starting from 1974, the MSP began to play a role as a key political party in the government. The party was closed following the 1980 coup, and party members were banned from all political activity. The Welfare Party (RP) was founded based on the same principles as the MSP, and the ban on Erbakan was removed as the leader of the party. The RP entered Parliament in 1991 and after receiving 21 percent of the votes, became a part of the coalition government, allowing Erbakan to become prime minister.

Erbakan quickly became immersed in scandals, from making his first official visit to Libya along with the diplomatic scandals which occurred during the visit; his dismissal of the Susurluk scandal, which revealed corruption between mafia, politicians and the police; inviting leaders of banned religious fraternities and communities to the prime minister's mansion. Unfortunate statements such as "İmam Hatip Schools [religious schools] are our backyard," "We received the most votes from the military dormitories," and "the Just Order will come; the nation will determine whether it will be bloody or not" provoked the military, which saw itself as the protector of Kemalism and secularism. Statements by some RP party members, especially during a Solidarity Night with Jerusalem organized by RP leaders in the Ankara district of Sincan, led to tanks rolling down the streets.

Some Turks saw Erbakan as a representative of a German-Turkish lobby, who had made Turkey distant from the U.S. and Israel through his opposition to these countries. Senior military officers gathered at navy headquarters in Gölcük and agreed to act against the government, believing that "political reaction is more dangerous than the PKK." During a MGK meeting convened on Feb. 28, 1997, military officials dictated decrees to the government, including heavy restrictions against religious communities, within the frame of the protection of secularity. At first, Erbakan resisted signing; he later signed it, believing that the matter would settle within a few days.

The decrees featured discriminative subjects including discrimination against religious Muslims, including the reassigning of schools which were affiliated to the Ministry of National Education, making eight-year primary education compulsory and the closure of Imam Hatip theological schools, restrictions on Quran courses, control of the media, mandates restricting the wearing of religious symbols and clothing, and requiring donations from sacrificed animals to be sent to Kemalist foundations. In one step, the military erased 50 years of developments allowing religious freedom of religion, and Turkey returned to status quo from the '50s.

After the Constitutional Court filed a lawsuit to close down the RP, Erbakan resigned from leadership on June 18. Although Tansu Çiller, the leader of the True Path Party (DYP), was supposed to become prime minister as coalition partner and the leader of the party with the second-highest number of seats in Parliament, then-President Demirel bypassed his former political party and assigned the post to Mesut Yılmaz, the leader of the Motherland Party (ANAP). Demirel thereby joined the post-modern coup. Yılmaz founded a coalition government together with Bülent Ecevit, the leader of the Democratic Left Party (DSP).

Within the scope of the Feb. 28 decisions, the "Batı Çalışma Grubu" (West Study Group) was founded and chaired by General Çevik Bir to control the proceeding of the decrees under the name of "Action Plan against Reactionary Forces." Briefings on secularism were given, particularly to judges and civil servants, by members of the military. Repression of religious segments of society was hardened, including a ban on headscarves at universities. A great number of civil servants were fired. Heavy censorship was imposed on the media, and opposition journalists were fired. Some companies saw embargoes imposed, on the pretext that they support reactionary politics. Turkey was effectively governed by the military, via the MGK.

An Anglo-American block that wanted to destroy political Islamism, with their anti-U.S. and anti-Israel ideology, was considered to be behind the Feb. 28 coup. The RP was closed, under the pretext that it was dragging the country into a civil war, and Erbakan was dismissed from politics. The Virtue Party (FP) that replaced the RP was also closed down for the same reason. The national vision movement was divided, but this led to the birth of the Justice and Development Party (AK Party), which came to power in the 2001 elections.

The execution of the Feb. 28 decrees, of which former Chief of General Staff Gen. Hüseyin Kıvrıkoğlu said, "This would continue even for thousand years if it is necessary," was diverted, as religious freedom became part of Turkish social and political life. The political movement targeted by the coup brought forward a new institution that came to power for only five years later, and left a mark in Turkey for the last 15 years. In 2012, the Feb. 28 post-modern coup was finally taken to court.
RELATED TOPICS