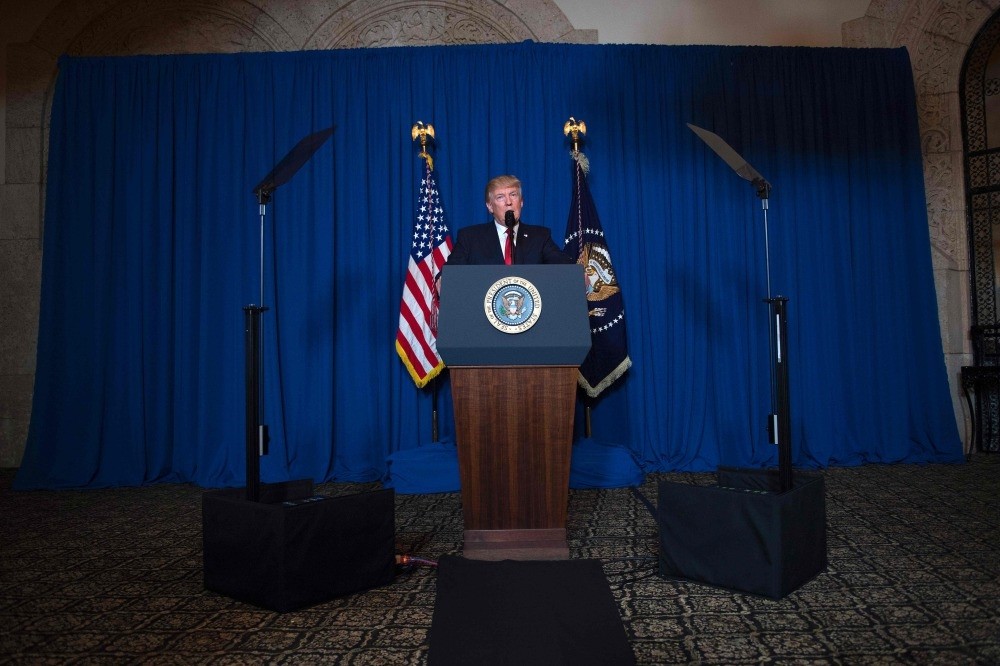 U.S. President Donald Trump delivers a statement on Syria on April 6. Trump ordered a massive military strike against a Syria Thursday in retaliation for a chemical weapons attack they blame on President Bashar Assad. (AFP Photo)
by Fatima Abushanab Apr 08, 2017 12:00 am

The urgency to address the horrific atrocities being committed by the Assad regime is requiring world leaders to adopt an ethical stand in their foreign policy. Yesterday in his press briefing with King Abdullah II of Jordan, President Trump expressed his shocked reaction to Bashar Assad's ruthless, bloody attack on innocent babies and children. To our surprise, President Trump, for the first time, did not approach the situation as a businessman turned politician — a behavior that was often seen in the count down of his first 100 days in office. Instead, he spoke from his conscience directly pointing out the fact that the Assad regime had "crossed many, many lines." For Trump, and many would agree, this was most certainly the appropriate ethical stance to take. U.S. Ambassador Nikki Haley's speech at the U.N. also detailed the position of the White House, which can be interpreted as a stern message to Assad that his crimes will not be tolerated for long.

Another interesting part of Trump's press briefing with the king of Jordan was his self-proclaimed status as an "unpredictable leader." Trump stated, "Why should I tell anyone about my thoughts on the military operations?" Trump's disapproval of the Obama administration's premature announcements concerning military incursions has been blatantly obvious since he took office. This criticism toward the former administration's handling of previous military interventions is up for debate. The ethical leadership of this president can interpreted from two possible standpoints: One, the American public may be very comfortable vesting full power in Trump, who should not be expected to disclose information on military operations; while, on the other hand, there might be millions of Americans concerned about the actions of a newly elected leader who has limited political experience.

Whichever side of the debate one takes, there is one thing we can be certain of: Trump is a flexible leader. As a result, his policies, statements and approaches to foreign policy — which are not fully shaped in comparison to his domestic politics — will require Trump to peruse the options on the table. With a political approach based on the principal of "give and take," the stakes do not seem to be high for President Trump. Whether it is the eradication of Daesh or finding alternative trade or energy deals, Trump seems to always resort to the question: "How will this benefit America?"

Trump is testing the international political terrain according to his own worldview. From the beginning, Trump's comments on a range of issues may have seemed too simplistic, even trivial, and have not provided much explanation, aside from determined reassurance to the media and the American public that he will make the right decisions. In his political endeavors Trump gained the trust of the American people, and in return, the American people believed that America could become "great again" with Trump at the wheel.

This approach, though positive in some aspects, could be risky in other situations considering the anarchic nature of the international system amid the actions of many political leaders who are becoming less predictable every day. Yet, in this new scenario, we can be sure of one thing, while being indeterminable, Trump will most certainly use his honed trade and business strategies to figure out the playing field. Remaining mysterious will buy him time to learn the ropes, his allies and his opponents. Once he does, he will make moves that will determine the fate of America and many others who depend on the United States' leadership in the world.

The first move, we hope, will begin with tackling the destruction of Daesh. However, it cannot end there. A bilateral operation with Turkey will be essential, in not only annihilating the terror organization, but also for uprooting the Assad regime to stabilize Syria and the region.

Considering much of the burden lies on Turkey and Europe to handle the matter, Trump may not be overly enthusiastic about solving the migration crisis. However, Trump must tie up loose ends before a successful operation to efface Daesh can occur. As a result, Trump needs Turkey's guidance for rolling out the most effective game plan to decontaminate Syria from the tyranny and terror of the Assad regime and Daesh.

In the meantime, the response coming from Russia towards the US will demonstrate to what degree the critical stages of diplomatic engagement between the two countries will reach. Putin fervently believes the US violated international law and blames Trump for infringing upon the sovereignty of Syria. However, Trump is doing what he believes is the right action to take.

After all, we can say that Trump's "flexibility" in his policies might be the start of the end of the Assad regime. This will mean the beginning of a realignment of the US with the Muslim world in ridding the region of terror totally. This will mean Trump will have to reconsider his affinity to Russia and put effort into making new friends.