Countdown to new wave of democracy in Turkey 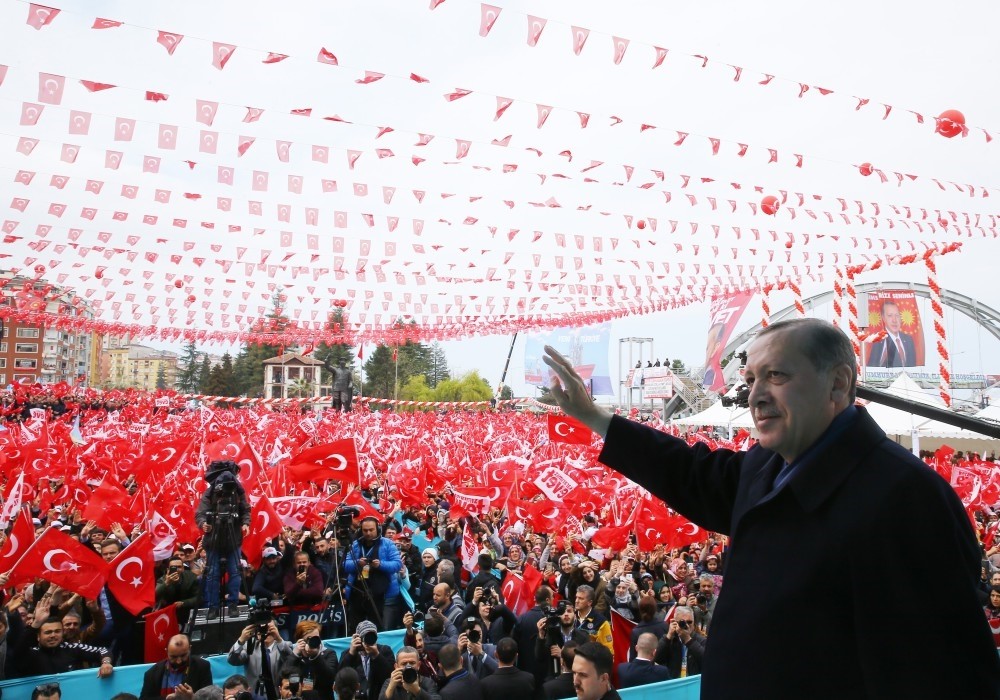 President Recep Tayyip Erdou011fan greets people in Rize during a referandum rally on April 3.
by Fatima Abushanab Apr 15, 2017 12:00 am

Regardless of the opposition from naysayers, it is crucial to think what Turkey and the region would gain if the majority of Turkish citizens vote ‘yes' in the April 16 referendum. Although the European far-right does not want to see a Muslim-majority country surpass them politically and economically, there is no denying that a new wave of democracy is ready to blow over Turkey

As we intently watch hatred spew over the April 16 referendum, the fact is many "no" supporters can't come to terms with a possible "yes" majority. As a result, it is important to consider what the referendum's success could mean for Turkey and the region. Many critics want to divert the attention away from the will of the people, instead diverting attention to their obsession concerning how President Recep Tayyip Erdoğan's ascendancy to the presidential seat could cause so-called loss in freedoms and unchecked powers. However, the naysayers have given little consideration as to why President Erdoğan has been voted into power over the past 15 years.

Over the past couple of years, we have seen critics attempt to isolate Erdoğan, when in reality, he cannot be separated from the Turkish public. President Erdoğan's leadership is a part of Turkey's extensive political history that dates back to the '70s. Turkey has endured significant roadblocks on its path to becoming a stable democracy, especially during the '60s, '70s, '80s and '90s when the Turkish Armed Forces (TSK) staged periodic coups.

The July 15 failed coup attempt, however, marked a new chapter in Turkish politics. For the first time in Turkish history, the people took charge of their future and toppled the military junta and its civilian conspirators. While continuing its struggle against treason and terror, Turkey entered into a period of tense relations with its Western allies, who dragged their feet condemning the coup and neglected to openly support the country's democratically elected leader. Throughout this bitter process there were ample concocted stories to mislead public opinion about Turkey's leader. Furthermore, there was a conscious collective effort to destroy the peace and stability of Turkey.

The question is: Why? The problem has never been about Erdoğan allegedly becoming an authoritarian or a dictator. This was simply a plot, a facade to drive attention away from the real issues that Erdoğan has been battling. The very issues the West claims are driving a wedge between itself and Turkey. One of these critical issues is Turkey's fight against the PKK, the Gülenist Terror Group (FETÖ) and other terror organizations. This battle, being fought both at home and abroad, did not resonate with the West. In fact, they have found a better option in furthering Western interests by buttressing and protecting members of terror organizations. Some of the other correlative problems also include Turkey's socioeconomic advancement in the face of feeble economies in the European Union.

In many cases, terrorism and economic issues rein over a country's political situation. Yet, in Turkey's rare case, its political impetus provides strength for resolving economic issues and strengthens its will to continue fighting terror.

When Erdoğan's party was elected to power in 2002, it was epitomized as a clear example of modern-conservative Muslim leadership. Almost a decade later, the West's opinion took a turn. The underlying reason is Turkey's unique political orientation as an independent actor rather than being subservient to the interests of its allies.

Turkey under President Erdoğan has never detracted away from its commitments to NATO, the EU and other bilateral relations. On the contrary, the ongoing trend over the past five years has demonstrated Western reluctance to engage with Turkey and attempts to push it into isolation. The EU and NATO have never sympathized with Turkey's fight against terror and, in many cases, have left Turkey to fight alone. This discriminatory and insensitive behavior towards Turkey led many to question the legitimacy of these organizations. Today, the West is well aware that Turkey wants to continue a future without the pressure and baggage of its allies. Currently, overcoming hurdles and stumbling blocks is the cornerstone of Turkey's national security. This has made Turkey's "authenticity policy" under President Erdoğan the marker of a new direction in world and regional politics.

There will certainly be tangible changes to the Constitution. Yet, many of the opponents in Turkey and Europe have been arguing that there will be a regime change. However, President Erdoğan has continued to reiterate in his campaign speeches that a regime change took place when Ataturk, the founder of Turkey, abolished the caliphate and officially created Turkey as a modern republic.

Today, President Erdoğan's initiative is to fully strengthen democracy at home through reform in the country's management system. This means checks and balances, transparency, strengthening of Parliament and, for the first time in the political history of Turkey, a president who can now be held accountable for his or her actions as the leader of the nation.

Far-right politicians across Europe feel threatened by these changes and have been protesting against the kind of reform President Erdoğan wants to bring to Turkey. Much of the criticism directed at President Erdoğan alleges that the reform is simply a power move. There is no evidence to support this claim. If that were the case, Turkey's leader would be expected to conserve the current governance system as it renders him power with no impunity.

Over the past few weeks, we have seen European leaders shamelessly berating Turkey and disrespecting the democratic will of the Turkish people by lashing out at its first directly elected leader. An attack on President Erdoğan is an assault on the Turkish people as a whole, a fact that the critical majority chooses to ignore. Critics simply sweep the facts under the rug rather than talk about them openly.

There is a "hatred of Turks" taking over Europe. Yet, these negative behavior trends coming out of countries like Holland, France, Germany and Austria point to an issue that extends far beyond Turkey.

European far-right politicians' refusal to accept Islam as one of the major religions in the western hemisphere has manifested itself in constant attacks on Turkey. Europe's tantrums over Turkey heading toward authoritarianism are baseless. The main reason for such allegations is due to a large presence of Muslims across Europe.

Therefore, much of the hatred and negative discourse is directed at Turkey's success, not because it is not a democracy as some argue, but because it is a Muslim democracy. Turkey as a persuasive power in the region has prominence across its borders. As a result, Turkey's April 16 referendum has been seen as a colossal threat to Europe and as extending its political influence across Europe. The Turkish diaspora across the West not only creates cultural and social affinity with Turkey but also fosters emotional ties that manifest in political action.

The Turkish vote across Europe is more than symbolic. It is dynamic and even evolutionary.

The far-right certainly does not want to see a Western secular country mirror a Muslim-majority country. This means there is an equal degree of competition and the possibility of Turkey outperforming its European counterparts politically, socially and economically. Not to mention, Turkey has significant leverage in Europe, with a large number of Turkish-European constituents who are politically active as dual nationals.

Europeans, in hindsight, purposefully refuse to acknowledge that Turkey's reform process will strengthen national security, create stability and lead to economic progress, all in the context of a solid and empowered political system. The fight against terror organizations will be stronger, while Turkey will look for strategic options that favor its interests in trade and foreign policy in the long term.

Yet, despite Europe pulling away from Turkey, the latter will never do the same because the Turkish nation is aware of the deep interconnectedness. There needs to be a constructive solution for ending prejudice, rancor and the hostility toward Turkey. These negative European sentiments will hopefully end soon through sensible actions that will diminish the animosity directed at a democratically governed nation like Turkey. Otherwise, Europe will be risking its relations with a critical ally it cannot do without.

Equally important is Turkey's approach to regional issues as a problem-solver. The U.S. administration, for example, already understands that a viable and concrete solution to the region's problems requires the responsible and visionary leadership of Turkey. Europe must also understand Turkey is a vital ally. No matter how many times Europe turns its back on Turkey and attempts to sever relations, the truth is blatantly clear: Europe needs Turkey. Despite NATO's hesitancy to take action against Daesh, the alliance knows it cannot conduct a successful operation without Turkey's leadership.

As a modern Republic, Turkey is moving ahead with a new Constitution and a renewed presidential system that follows the footsteps of its Western allies. President Erdoğan and his constituents are not taking this step solely for the welfare of the Turkish people but also for the prosperity of the region. In the long run, a strong Turkey means the possibility of stronger neighbors, further economic prosperity and political stability.

Turkey, historically and currently, is a part of Europe, and it will always be Western in orientation. Unfortunately, in the past it was widely believed that Turkey was the "sick man of Europe." When in reality, it was the unique "unwanted man" in Europe. In today's circumstances, Turkey's Muslim character can no longer be the reason for it to be shunned. The bigoted dialogues of the past were not acceptable then and cannot be condoned today.

Let us hope that Turkey's referendum will push European leaders to reassess their views on Turkey and motivate them to put forward a respectful manner toward rekindling a vital partnership.
Last Update: Apr 15, 2017 2:46 am
RELATED TOPICS